A mountain on dwarf planet Ceres

Here’s a reconstructed “perspective view” of the tallest mountain on Ceres, which in turn is the largest world in the asteroid belt between Mars and Jupiter. Earthly astronomers call the mountain Ahuna Mons. 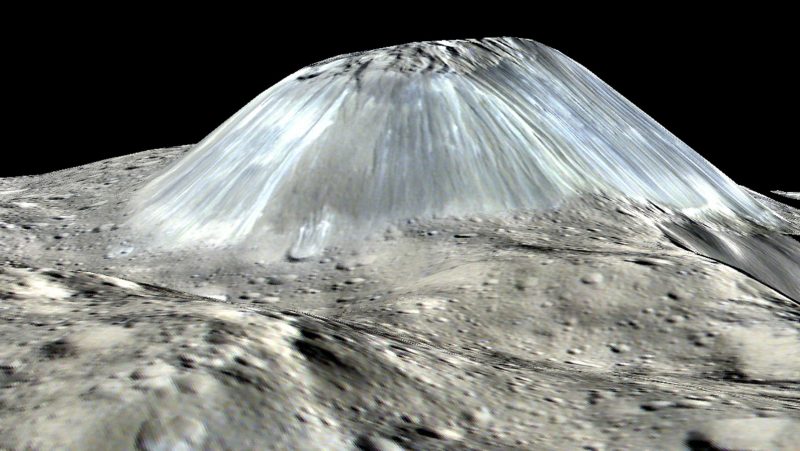 The Dawn spacecraft – which orbited Ceres from 2015 to 2018 – acquired the images needed to create this perspective view of Ceres’ tallest mountain in 2016, from an altitude of 239 miles (385 km). The images were combined with elevation data to created this reconstructed image. ESA said, “Ahuna Mons’ elevation has been exaggerated by a factor of two.” The width of the dome in this image is approximately 12 miles (20 km). Image via NASA/UCLA/MPS/DLR/IDA/ESA.

Ceres and Pluto are two of just five recognized dwarf planets in our solar system. Ceres is the only one of the dwarf planets that orbits in the asteroid belt between Mars and Jupiter; formerly, it was designated as the largest asteroid. We learned a tremendous amount about Ceres when NASA’s Dawn spacecraft orbited this rocky world. Dawn – the first spacecraft ever to orbit two extraterrestrial bodies (it orbited Vesta in 2011 and 2012) – studied the icy, cratered surface of Ceres from March 2015 until the spacecraft ran out of fuel in October 2018. It remains in uncontrolled orbit around Ceres to this day.

And – also to this day – astronomers and space scientists are continuing to pore over Dawn’s data. The images at top and bottom show the tallest mountain on Ceres, which earthly astronomers have named Ahuna Mons. It rises to an elevation of 2.5 miles (4,000 meters) at its peak. As you can see from both images, it’s marked by numerous bright streaks that run down its flanks. ESA said:

Scientists have determined that these marks are actually salt deposits left behind from the formation of Ahuna Mons, when plumes of saltwater and mud rose and erupted from within Ceres, puncturing the surface and creating the mountain seen here. While temperatures on Ceres are far colder than those on Earth, this mechanism is thought to be somewhat similar to the formation of volcanoes by terrestrial magma plumes.

Read more about Ceres and Dawn studies via ESA 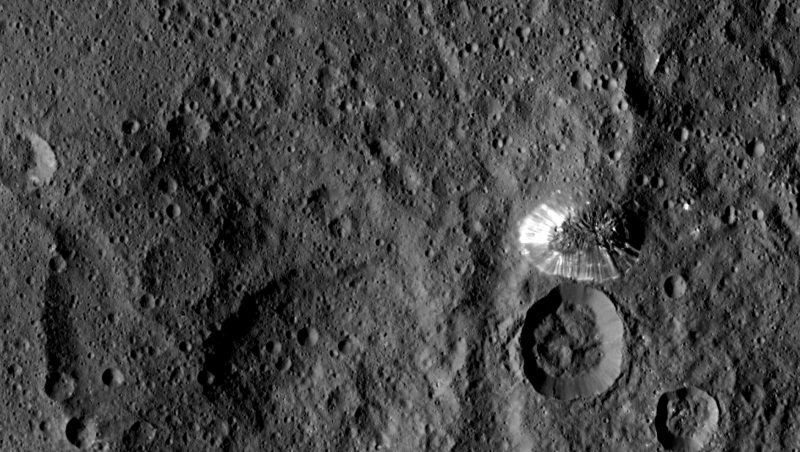 NASA’s Dawn spacecraft first spotted tall, conical Ahuna Mons on Ceres in 2015, from a distance of 915 miles (1,470 km). The mountain, located in Ceres’ southern hemisphere, stands 4 km (2.5 mi) high. Its perimeter is sharply defined, with almost no accumulated debris at the base of the brightly streaked slope. This image was taken on August 19, 2015. Its resolution is 450 feet (140 meters) per pixel. Image via NASA PhotoJournal.