Are we alone? If advanced alien civilizations are out there, why haven’t we heard from them? Scientists call this Fermi’s Paradox – aka The Great Silence – and they gathered in Paris to discuss it. 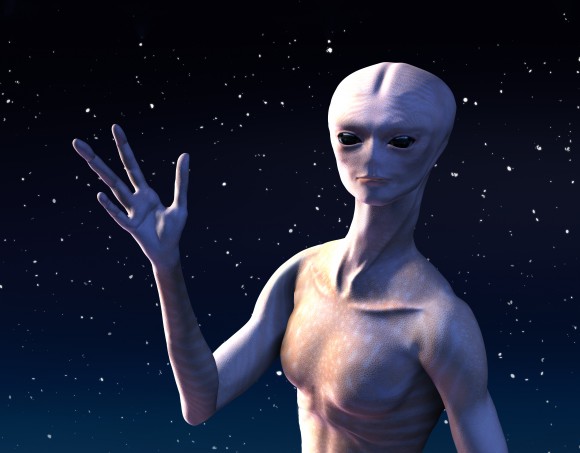 Where are they? The Italian physicist Enrico Fermi famously posed that question in 1950, and the question is now known as the Fermi Paradox or The Great Silence. Fermi asked – if other civilizations exist on other planets in our Milky Way galaxy, and if some have spread through the galaxy as both science fiction and scientists have conjectured – why haven’t we heard from them?

According to Florence Raulin Cerceau, co-chair of the workshop and a member of METI’s Board of Directors:

Every two years, METI International organizes a one-day workshop in Paris as part of a series of workshops entitled ‘What is Life? An Extraterrestrial Perspective.’ This year, METI collaborated with the Cité des Sciences et de l’Industrie – a huge science museum in Paris – and the Centre Alexandre-Koyré – a research center for historical studies of science and technology – to gather renowned scientists, philosophers, and sociologists to debate the Fermi Paradox.

This puzzle of why we haven’t detected extraterrestrial life has been discussed often, but in this workshop’s unique focus, many of the talks tackled a controversial explanation first suggested in the 1970s called the Zoo Hypothesis. 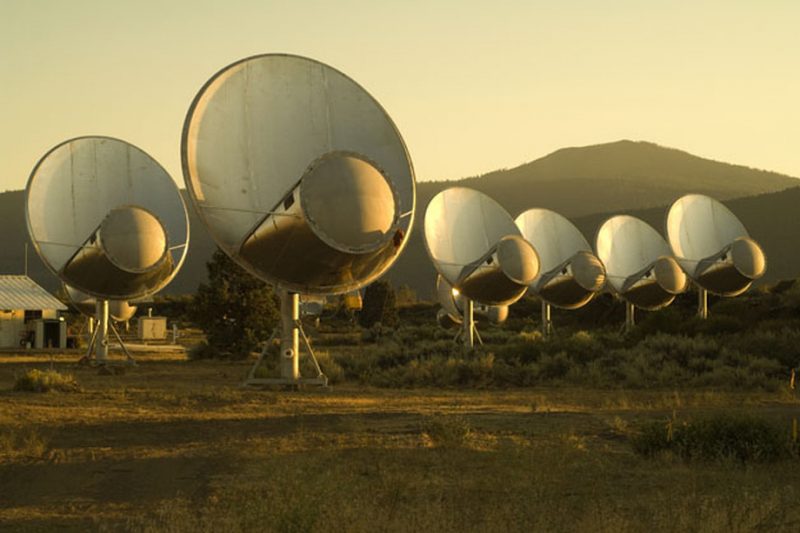 Modern searches for extraterrestrial intelligence have focused on looking for radio or laser signals. For example, the Allen Telescope Array near San Francisco has conducted this type of search. Image via SETI Institute. 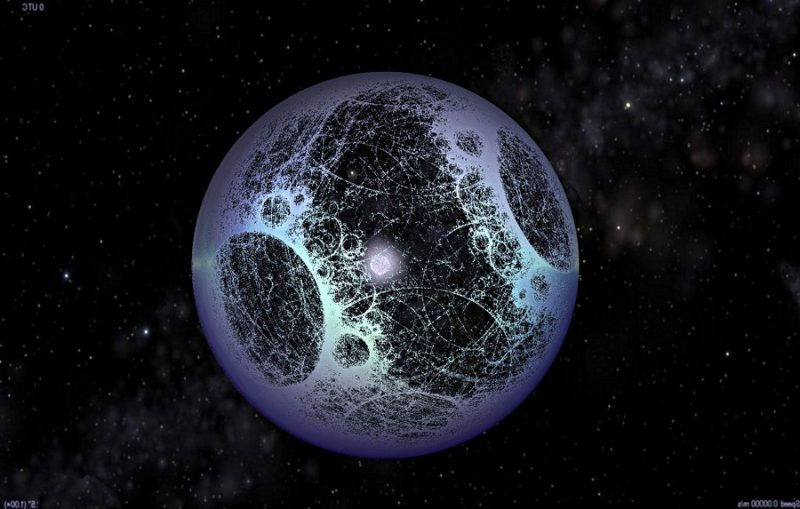 Artist’s concept of a Dyson sphere. Earthly scientists theorize that a construction like this one could be used by an advanced civilization to harness energy from its star. If an alien intelligence capable of building a Dyson Sphere exists, do they know about us? Image via SentientDevelopments.com.

Another question is, if extraterrestrials know our civilization is here on Earth, then why have they been so quiet? This part of the conundrum is what’s known as The Great Silence. As Douglas Vakoch, president of METI, surmised:

Perhaps extraterrestrials are watching humans on Earth, much as we watch animals in a zoo. How can we get the galactic zookeepers to reveal themselves? If we went to a zoo and suddenly a zebra turned toward us, looked us in the eye, and started pounding out a series of prime numbers with its hoof, that would establish a radically different relationship between us and the zebra, and we would feel compelled to respond. We can do the same with extraterrestrials by transmitting powerful, intentional, information-rich radio signals to nearby stars.

However, an actual physical meeting with a highly advanced civilization might be dangerous, as noted by Danielle Briot, an astrophysicist at the Observatoire de Paris:

Past experience shows that any meeting of two civilizations is dangerous for both. Knowing that, civilized extraterrestrials will not try to communicate with us.

Inside Cité des Sciences et de l’Industrie in Paris, the location of the METI workshop this month. Image via Leandro Neumann Ciuffo.

Could we really be part of a galactic zoo? Being observed but from a distance? Or, going one step further, could we be quarantined from the rest of the galaxy? That idea was voiced by Jean-Pierre Rospars, the honorary research director at the Institut National de la Recherche Agronomique (INRA) and co-chair of the workshop:

It seems likely that extraterrestrials are imposing a ‘galactic quarantine’ because they realize it would be culturally disruptive for us to learn about them. Cognitive evolution on Earth shows random features while also following predictable paths. By considering the regular and random components together, we can expect the repeated, independent emergence of intelligent species in the universe, and we should expect to see more or less similar forms of intelligence everywhere, under favorable conditions. There’s no reason to think that humans have reached the highest cognitive level possible. Higher levels might evolve on Earth in the future and already be reached elsewhere.

All of this is conjecture at this point, and depends on just how many civilizations are really out there, which is still unknown. The Drake Equation has been used to try to estimate that number, but there are still unknown variables to be accounted for. How many exoplanets can support life? How many actually do? How often does intelligent life evolve? How many civilizations are more advanced than us? 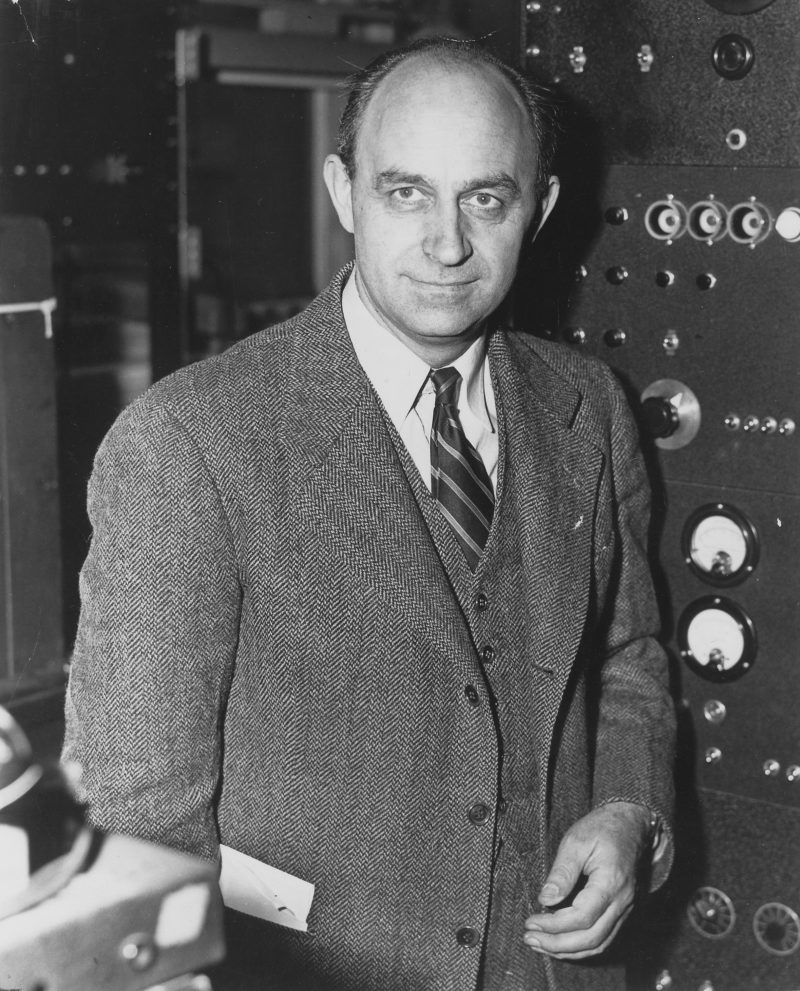 Photo of Italian physicist Enrico Fermi from the 1940s. The Fermi Paradox was named after him in 1950. Image via Wikimedia Commons.

The Drake Equation is as follows:

N = The number of civilizations in the Milky Way Galaxy whose electromagnetic emissions are detectable.

R = The rate of formation of stars suitable for the development of intelligent life.

fp = The fraction of those stars with planetary systems.

ne = The number of planets, per solar system, with an environment suitable for life.

fl = The fraction of suitable planets on which life actually appears.

fi = The fraction of life bearing planets on which intelligent life emerges.

fc = The fraction of civilizations that develop a technology that releases detectable signs of their existence into space.

L = The length of time such civilizations release detectable signals into space.

Searches like SETI have focused mainly on looking for radio or light signals. Civilizations similar to ours in development might use those technologies, but what about a civilization thousands or millions of years ahead of us? It seems likely their technology would be much more evolved was well. We would probably have very little in common with them, but perhaps also with less advanced civilizations, as noted by Roland Lehoucq, an astrophysicist at the Commissariat à l’Énergie Atomique (CEA):

The environment on an exoplanet will impose its own rules. There is no trend in biological evolution: the huge range of various morphologies observed on Earth renders any exobiological speculation improbable, at least for macroscopic ‘complex’ life.

A “bat-man” as depicted in the Great Moon Hoax of 1835. Many people thought they really did exist on the moon. Image via Wikimedia Commons.

It appears that although radio communications provide a natural means for SETI for civilizations younger than a few millennia, older civilizations should rather develop extensive programs of interstellar colonization, because this is the only way to achieve undisputable evidence – either for or against the existence of ETI (extraterrestrial intelligence) – within their lifetime.

For some people, these questions may sound like something out of science fiction, but Cyril Birnbaum and Brigitte David of the Cité des Sciences et de l’Industrie, insist that they are valid:

We are very interested in the scientific approach used in the analysis of the Fermi Paradox and the search for intelligent life in the universe. The question ‘Are we alone?’ affects us all, because it is directly related to humanity and our place in the cosmos. This is an essential question that will introduce the public to the scientific process in a show being designed at the planetarium.

Aliens have long been a staple of science fiction, as also discussed by Lehoucq and Steyer. As one example shown, the Great Moon Hoax of 1835 depicted “bat-men” in a series of satirical newspaper articles. Many readers, however, thought this was a factual account, when it wasn’t. 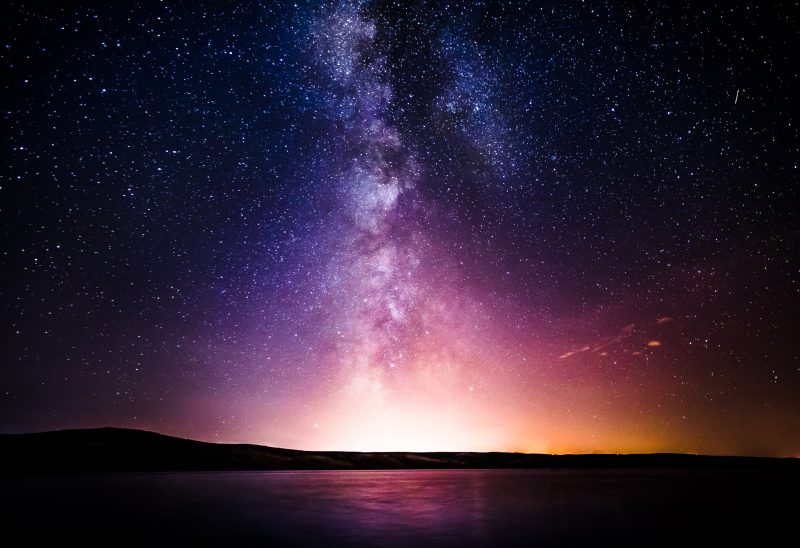 It’s a big universe out there – are we alone or do we have company? Image via Shutterstock.

Some people will argue that aliens have already found us, i.e. the UFO phenomenon. That is a subject of intense debate all by itself, but it’s an idea worth considering, since informed conjecture related to The Great Silence and the Fermi Paradox suggests that any civilizations advanced enough to colonize the galaxy should know about us by now. While the great majority of sightings can be explained as misidentifications and hoaxes, there are some cases that have not been – such as some well-documented military reports like Nimitz in 2004 (and a related previously secret Pentagon UFO study program) – as reported by The New York Times on December 16, 2017. While there is as yet no proof that aliens are involved in any of these incidents, they are certainly of interest and should be investigated, whatever the explanation turns out to be.

In terms of The Great Silence, there are no easy answers, at least not yet. But bringing a multi-disciplinary approach – as with the METI workshop – is an interesting way to tackle the question, and one that might lead to something even more interesting. That’s because finding extraterrestrial intelligence – or not – will require input from a wide range of scientific fields.

Bottom line: The Great Silence – and the search for alien intelligence in general – is one of the most significant mysteries facing humanity. On March 18, 2019, a group called METI – which stands for Messaging Extraterrestrial Intelligence – held a one-day workshop in Paris to discuss it.