Would you have believed the Great Moon Hoax?

It sounds preposterous today. But – beginning on today’s date in 1835 – a newspaper claimed a famous astronomer had found life on the moon, including bat-men and unicorns. The Great Moon Hoax was widely read and believed. 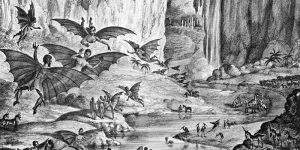 The inhabitants of the moon (Vespertilio-homo or bat-men), via Wikimedia Commons.

August 25, 1835. On this date, a New York newspaper, The Sun, published the first article in what’s come to be called The Great Moon Hoax. It was a series of six articles alleging the discovery of life on the moon – including bat-men and unicorns – supposedly made by famous astronomer Sir John Herschel while on a trip to the Cape of Good Hope in South Africa. Richard Adams Locke, a reporter for The Sun, is said to have written the article, although he never publicly admitted it.

According to the articles, a Dr. Andrew Grant, Herschel’s (fictitious) companion, was the author. The articles also referred to the Edinburgh Journal of Science, which had been out of commission for some years. Yet, for most readers, the author and the source made the articles seem credible.

The articles were reprinted in papers throughout Europe.

The first article described, among other things, a super-powerful telescope built by Herschel.

The weight of this ponderous lens was 14,826 pounds [6,700 kilograms] or nearly seven tons after being polished; and its estimated magnifying power 42,000 times. It was therefore presumed to be capable of representing objects in our lunar satellite of little more than eighteen inches [46 cm] in diameter, providing its focal image of them could be rendered distinct by the transfusion of article light.

The huge telescope supposedly allowed Herschel to make his fantastic discoveries. One of the articles said, for example:

It was one of the noble valleys at the foot of this mountain that we found the very superior species of the Vespertilio-homo (bat-men) … They were of infinitely greater personal beauty, and appeared in our eyes scarcely less lovely than the general representations of angels by the more imaginative schools of painters. 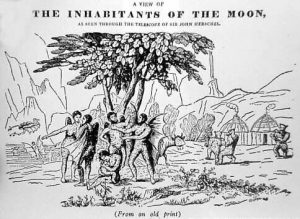 From the very first article, vigilant readers might have guessed it was a hoax. Two scientists from Yale are said to have tried to find the Edinburgh Journal of Science in Yale’s library. An unsuccessful search led them to travel all the way to The Sun‘s office in New York, where they were told that the original journal article was still at the printers.

Here are all six parts of the Great Moon Hoax

The second article described many other fascinating lunar findings such as beautiful basaltic formations, cliffs, great oceans, and lunar forests. It also described many animals, one similar to a bison, and another that resembled a goat:

The next animal perceived would be classed on Earth as a monster. It was of a bluish lead color, about the size of a goat, with a head and beard like him, and a single horn, slightly inclined forward from the perpendicular. The female was destitute of horn and beard, but had a much longer tail. It was gregarious, and chiefly abounded on the acclivitous glades of the woods. In elegance of symmetry it rivalled the antelope, and like him it seemed an agile sprightly creature, running with great speed, and springing from the green turf with all the unaccountable antics of a young lamb or kitten. This beautiful creature afforded us the most exquisite amusement.

It was in the last of the series of six articles that the existence of Vespertilio-homo or bat-men was divulged.

Sir John Herschel at first accepted the story with a sense of humour, saying:

It is too bad my real discoveries here won’t be that exciting.

The author must have underestimated the gullibility of the people, since the news spread very quickly. Herschel began receiving lots of correspondence regarding his “discoveries” and eventually was not so jolly about it:

I have been pestered from all quarters with that ridiculous hoax about the moon – in English, French, Italian, and German!

The Sun, which had begun publishing just two years earlier, had a reason for publishing the Great Moon Hoax. It dramatically increased the paper’s popularity.

Also, the author appeared to have been seeking to satirize a scientist and science fiction author of the day, Thomas Dick, who mixed fact with fiction in his novels.

The Great Moon Hoax showed how gullible people can be. It may still serve as a reminder that not everything we read is true, even if the authors – whoever they may be – couch their words in the language of science in order to appear credible. Bottom line: On August 25, 1835, the first of the six Great Moon Hoax articles was published. It described sensational discoveries of the famous astronomer John Herschel, who supposedly observed life on the moon.