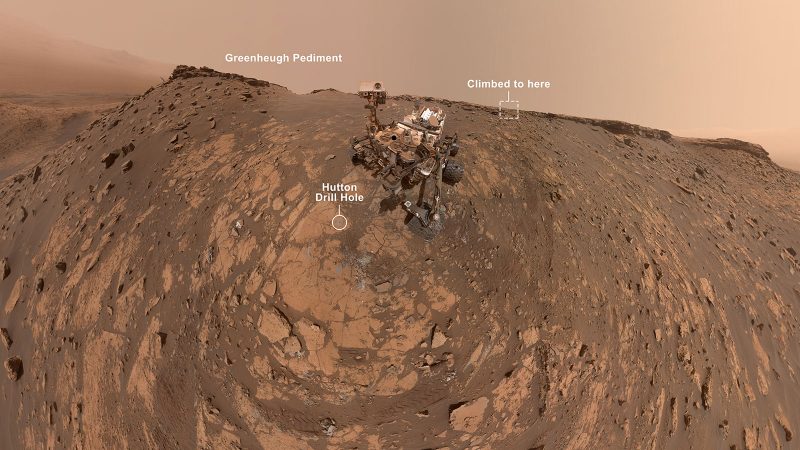 While we’re practicing social distancing due to the COVID-19 pandemic, EarthSky’s been posting your #SocialDistanceSelfies from places across Earth. But here’s one from quite a bit farther …

NASA’s Curiosity rover recently joined in the activity, sending back a beautiful photo of itself at the base of a steep hill, just before it started climbing. NASA posted the selfie on its website on March 20, 2020.

Curiosity snapped the selfie on February 26, 2020, just before the rover crested the “Greenheugh Pediment,” a broad sheet of crumbling bedrock that sits on top of the hill. The image is a stunning 360 degree view of the landscape around the rover, with Curiosity itself the focus of attention. The entire panorama is composed of 86 individual images. At the time the selfie was taken, Curiosity was about 11 feet (3.4 meters) below the spot where it later climbed onto the pediment.

Also visible in the image is the latest drill hole made by the rover, in the bedrock target called “Hutton.” 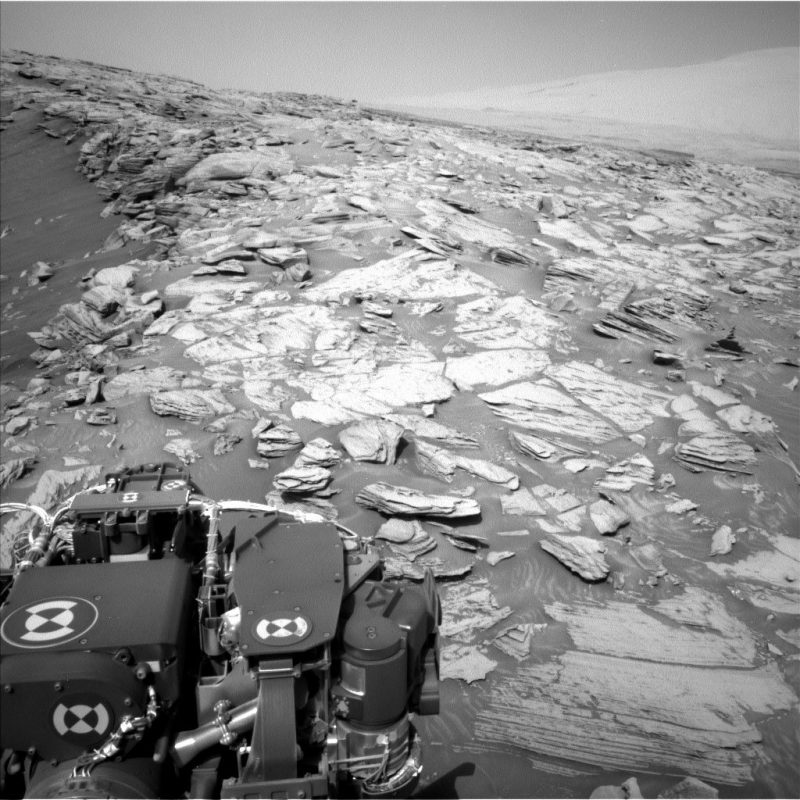 A Navcam view of Greenheugh Pediment (left side of image), after Curiosity made it to the top of the steep hill. Image via NASA/ JPL-Caltech. 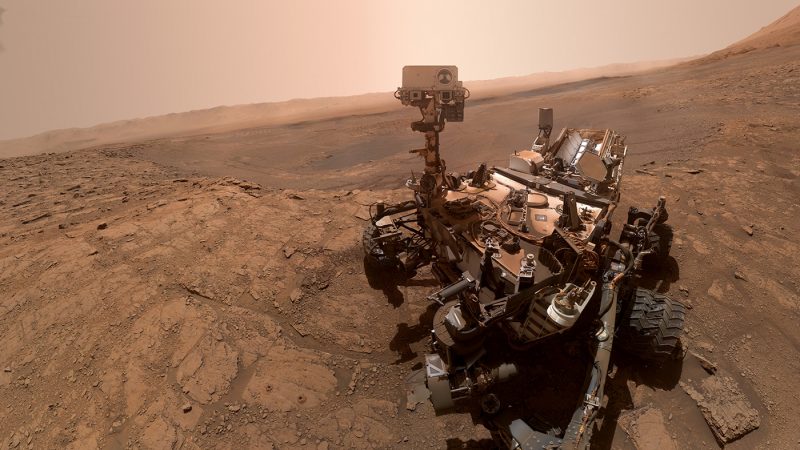 A previous selfie of Curiosity, from October 11, 2019. Image via NASA/ JPL-Caltech/ MSSS.

Not only is the selfie itself impressive, but Curiosity also set a new record for the steepest terrain it has ever climbed so far in its mission, a challenging 31 degrees. This is only one degree of tilt less than that climbed by the Opportunity rover, which set the all-time record of any rover so far on Mars in 2016. That sounds like a potentially dangerous incline, and it could be, but Curiosity is designed to be able to tilt up to 45 degrees safely, thanks to its advanced rocker-bogie wheel system.

It took Curiosity three drives to make it to the crest of the hill, which it reached on March 6, 2020, also known as sol 2,696 of the mission. A sol is one Martian day, which is about one Earth day plus 37 minutes.

People often ask how the rover(s) can take selfies, especially when you don’t see the robotic arm holding the camera in the photos. The arm acts as the “selfie stick” for the rover. Curiosity uses its Mars Hand Lens Camera (MAHLI), which is in the turret at the end of the arm. Since each image only shows a small area, many images are taken and then later stitched together to create the panorama. During this process, the arm itself is removed from the images. MAHLI is primarily used to take close-up images of sand and rocks. As Doug Ellison, a Curiosity camera operator at the Jet Propulsion Laboratory (JPL), explained:

We get asked so often how Curiosity takes a selfie. We thought the best way to explain it would be to let the rover show everyone from its own point of view just how it’s done.

See the videos below showing how this and other selfies are made:

Last Thanksgiving, Curiosity also took its highest-resolution panorama to date, containing over 1,000 images with 1.8 billion pixels. The view is breathtaking, to say the least. The images were taken between November 24 and December 1, 2019, and then assembled together.

Curiosity landed on Mars in 2012, and since 2014 has been slowly moving up the lower slopes of Mount Sharp, the large mountain in the middle of Gale Crater. The rover has found evidence that a large lake used to fill the crater a few billion years ago, and that conditions at the time were suitable for microscopic life to have existed there. It has also found ancient organic material in rocks and confirmed the existence of the still-unexplained methane in the Martian atmosphere.

Bottom line: NASA’s Curiosity rover has taken a beautiful new selfie photo of itself on Mars.