This just in … a new super-cool composite from Curiosity on Mars. The panorama contains more than 1,000 images taken last Thanksgiving and assembled over the past few months … 1.8 billion new pixels of Martian landscape!

Yesterday (March 4, 2020) NASA released a panoramic image of the Martian surface captured by the Curiosity rover. It’s the highest-resolution panorama yet of the planet’s surface.

Composed of more than 1,000 images taken during the 2019 Thanksgiving holiday and carefully assembled over the ensuing months, the composite contains 1.8 billion pixels of Martian landscape. The rover’s Mast Camera, or Mastcam, used its telephoto lens to produce the panorama; meanwhile, it relied on its medium-angle lens to produce a lower-resolution, nearly 650-million-pixel panorama that includes the rover’s deck and robotic arm.

Zoom into the panorama:

The panorama showcases Glen Torridon, a region on the side of Mount Sharp that Curiosity is exploring. They were taken between November 24 and December 1, 2019, when the mission team was out for the Thanksgiving holiday. NASA said:

Sitting still with few tasks to do while awaiting the team to return and provide its next commands, the rover had a rare chance to image its surroundings from the same vantage point several days in a row. 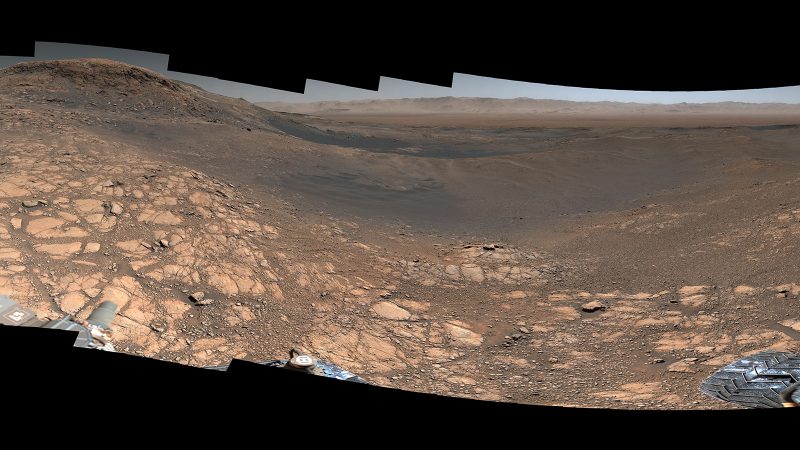 It required more than 6 1/2 hours over the four days for Curiosity to capture the individual shots. Mastcam operators programmed the complex task list, which included pointing the rover’s mast and making sure the images were in focus. To ensure consistent lighting, they confined imaging to between noon and 2 p.m. local Mars time each day.

In 2013, Curiosity produced a 1.3-billion-pixel panorama using both Mastcam cameras; its black-and-white Navigation Cameras, or Navcams, provided images of the rover itself.