Listen to the Martian wind

On December 1, 2018, NASA’s InSight lander, which touched down on Mars on November 26, provided the first ever sounds of winds on the planet Mars.

The spacecraft’s sensors captured a haunting low rumble caused by vibrations from the wind, estimated to be blowing 10 to 15 miles per hour (6-24 km per hour) from northwest to southeast. The winds were consistent with the direction of dust devil streaks in the landing area, which were observed from orbit.

You can listen to full-length uncompressed .wav files here.

Capturing this audio was an unplanned treat. But one of the things our mission is dedicated to is measuring motion on Mars, and naturally that includes motion caused by sound waves.

InSight (which stands for Interior Exploration using Seismic Investigations, Geodesy and Heat Transport) is not a rover; it’s designed to stay in one place and to drill into and study Mars’ deep interior. NASA said:

InSight’s two-year mission will be to study the deep interior of Mars to learn how all celestial bodies with rocky surfaces, including Earth and the moon, formed. 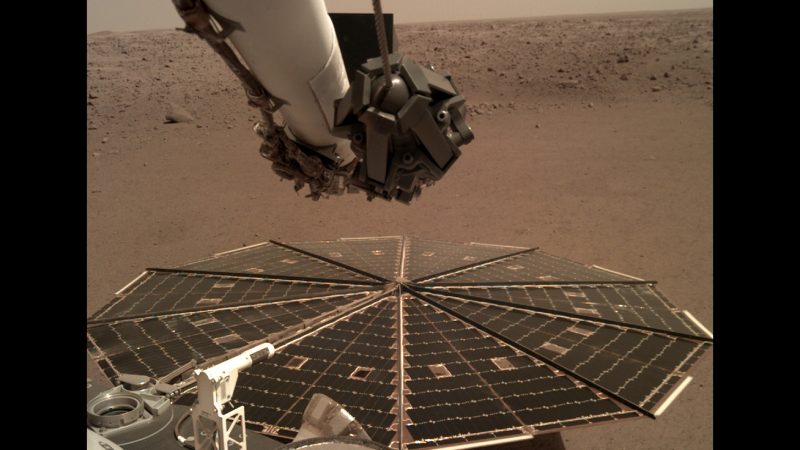 One of InSight’s 7-foot (2.2 meter) wide solar panels was imaged by the lander’s Instrument Deployment Camera, which is fixed to the elbow of its robotic arm. Image via NASA/JPL-Caltech.

How did InSight capture the wind sounds? Here’s an explanation from NASA:

Two very sensitive sensors on the spacecraft detected these wind vibrations: an air pressure sensor inside the lander and a seismometer sitting on the lander’s deck, awaiting deployment by InSight’s robotic arm. The two instruments recorded the wind noise in different ways. The air pressure sensor, part of the Auxiliary Payload Sensor Subsystem, which will collect meteorological data, recorded these air vibrations directly. The seismometer recorded lander vibrations caused by the wind moving over the spacecraft’s solar panels, which are each 7 feet (2.2 meters) in diameter and stick out from the sides of the lander like a giant pair of ears.

The InSight lander acts like a giant ear. The solar panels on the lander’s sides respond to pressure fluctuations of the wind. It’s like InSight is cupping its ears and hearing the Mars wind beating on it. When we looked at the direction of the lander vibrations coming from the solar panels, it matches the expected wind direction at our landing site.

Pike compared the effect to a flag in the wind. As a flag breaks up the wind, it creates oscillations in air pressure that the human ear perceives as flapping.