There’s a new robot on Mars’ surface, the InSight spacecraft, designed to study the planet’s interior. It set down safely Monday after nearly 7 months of flight from Earth and a 7-minute nail-biting plummet through Mars’ thin atmosphere. 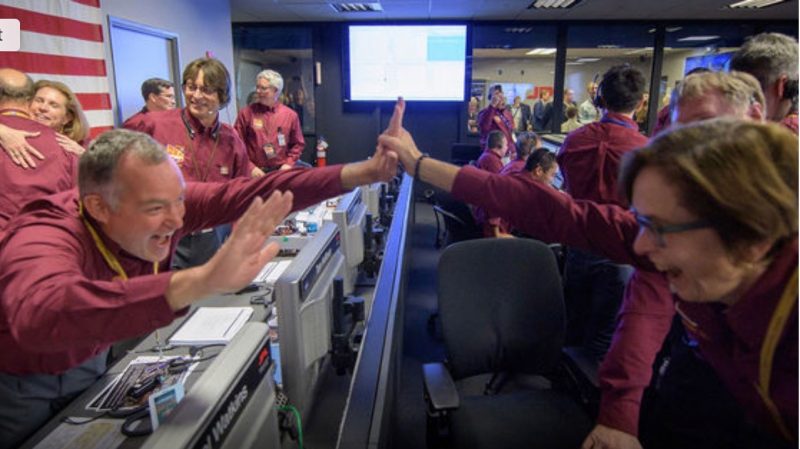 It was a series of cheers – more cheers – and finally a gigantic cheer from space scientists and engineers at NASA’s Jet Propulsion Laboratory as they witnessed the nail-biting minutes prior to the InSight spacecraft’s successful touchdown on Mars’ surface Monday, November 26, 2018. The lander touched down near Mars’ equator on the western side of a flat, smooth expanse of lava called Elysium Planitia. The signal affirming a completed landing sequence came at 19:52:59 UTC (2:52:59 p.m. EST – translate to your time). This was NASA’s eighth successful soft-landing on Mars.

InSight took almost seven months to travel 300 million miles (458 million km) from Earth. This craft is not a rover; it’s designed to stay in one place and to drill into and study Mars’ deep interior. The name InSight stands for Interior Exploration using Seismic Investigations, Geodesy and Heat Transport. NASA said:

InSight’s two-year mission will be to study the deep interior of Mars to learn how all celestial bodies with rocky surfaces, including Earth and the moon, formed. 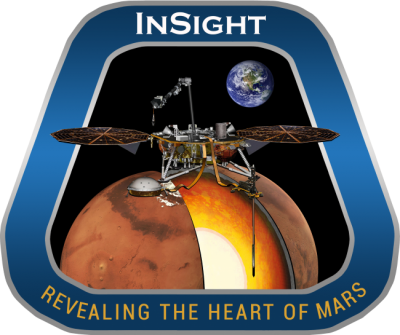 We hit the Martian atmosphere at 12,300 mph (19,800 km per hour), and the whole sequence to touching down on the surface took only 6 1/2 minutes. During that short span of time, InSight had to autonomously perform dozens of operations and do them flawlessly – and by all indications that is exactly what our spacecraft did.

Another big winner on Monday was the MarCO mission, embodied in two briefcase-sized CubeSats that launched on the same rocket as InSight and made the trip to Mars with it. When they reached Mars, after successfully carrying out a number of communications and in-flight navigation experiments, the twin MarCOs were set in position to receive transmissions from InSight during its entry, descent and landing. The MarCOs successfully received the landing signal from InSight and relayed it to NASA’s Jet Propulsion Laboratory in Pasadena, California. They are the first CubeSats sent into deep space. Joel Krajewski, MarCO project manager at JPL, said:

That’s one giant leap for our intrepid, briefcase-sized robotic explorers. I think CubeSats have a big future beyond Earth’s orbit, and the MarCO team is happy to trailblaze the way.

Totally agree. Copies of these sats could be built for a few hundred $K now, and soon will cost tens of $K. NASA Science is wisely investing in this exciting area. https://t.co/ephq4ia1Lz

InSight will begin to collect science data within the first week after landing, though the teams will focus mainly on preparing to set InSight’s instruments on the Martian ground. At least two days after touchdown, the engineering team will begin to deploy InSight’s 5.9-foot-long (1.8-meter-long) robotic arm so that it can take images of the landscape.

Landing was thrilling, but I’m looking forward to the drilling. When the first images come down, our engineering and science teams will hit the ground running, beginning to plan where to deploy our science instruments. Within two or three months, the arm will deploy the mission’s main science instruments, the Seismic Experiment for Interior Structure (SEIS) and Heat Flow and Physical Properties Package (HP3) instruments.

InSight is expected to operate on the surface for one Martian year, plus 40 Martian days, or sols, until at least November 24, 2020.

Here's a version of @NASAInSight's first #Mars image edited to remove the distracting debris from the lens cover and some barrel distortion. For aesthetic enjoyment only (and until we see a new version from the lander!) #MarsLanding pic.twitter.com/Kdf9yxwPvX