Scientists have created a recording of the eerie ‘song’ that Earth sings when it’s hit by a solar storm.

An international team of scientists, using data from ESA’s Cluster mission, have created the first recording of the eerie “song” that Earth makes when it’s hit by a solar storm.

The song comes from waves that are generated in the Earth’s magnetic field by the collision of the storm. The storm itself is the eruption of electrically charged particles from the sun’s atmosphere. The sun constantly sends out streams of charged particles, but Earth’s magnetic field prevents these particles from entering our atmosphere. However, explosions on the sun’s surface can send a huge clouds of particles and radiation out into space. If these solar storms are directed towards Earth, when they hit they can disrupt our satellite systems, cause widespread blackouts and affect GPS systems.

To create the recording, the team analyzed two decades of data from ESA’s Cluster mission, four spacecraft that have been orbiting Earth in formation since 2001, investigating our planet’s magnetic environment and its interaction with the solar wind.

As part of their orbits, the Cluster spacecraft repeatedly fly through the what’s called the foreshock, the first region that particles encounter when a solar storm hits our planet. The team found that in the early part of the mission, from 2001 to 2005, the spacecraft flew through six such collisions, recording the waves that were generated.

The new analysis shows that, during the collision, the foreshock releases magnetic waves that are much more complex than first thought.

When the frequencies of these magnetic waves are transformed into audible signals, they give rise to a psychedelic song more reminiscent of sound effects from a science fiction movie than from a natural phenomenon. 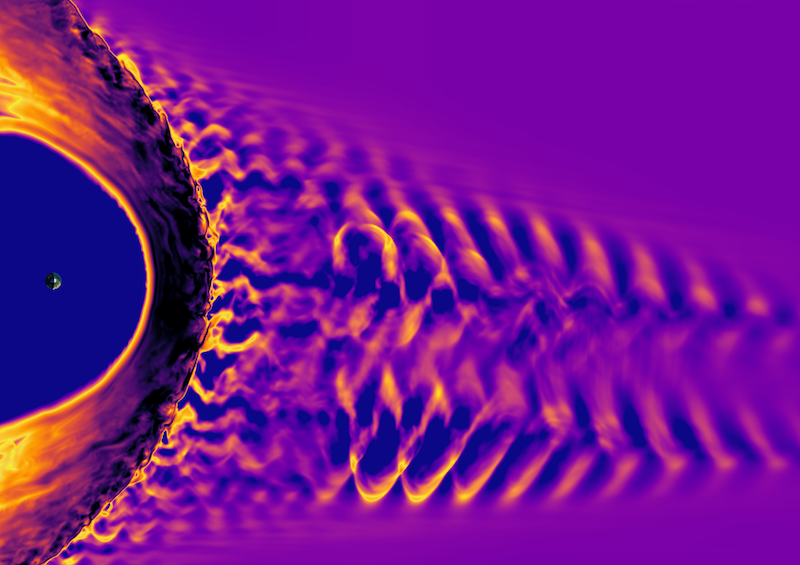 In this image – a computer simulation being developed at the University of Helsinki – you can see the intricate wave pattern that appears in Earth’s magnetic environment during solar storms. Earth is the tiny white dot at the left, within the dark blue half circle. The large arc around Earth represents our planet’s magnetic bow shock. The swirling pattern to the right is the foreshock region where the solar wind breaks into waves. Image via Vlasiator team/University of Helsinki/AGU.

In quiet times, when no solar storm is striking the Earth, the song is lower in pitch and less complex. But when a solar storm hits, the frequency of the wave is roughly doubled, depending on the strength of the magnetic field in the storm.

University of Helsinki astrophysicist Lucile Turc is lead author of the study, published November 18, 2019 in the peer-reviewed journal Geophysical Research Letters. She said in a statement:

It’s like the storm is changing the tuning of the foreshock.

The researchers said that not only does the frequency of the wave change, but it also becomes much more complicated than the single frequency of the quiet times. Once the storm hits the foreshock, the wave breaks into a complex network of different, higher frequencies. According to a statement about the research:

The changes in the foreshock have the power to affect the way the solar storm is propagated down to the Earth’s surface. Although it is still an open question exactly how this process works, it is clear that the energy generated by waves in the foreshock cannot escape back into space, as the waves are pushed towards Earth by the incoming solar storm.

Before they reach our atmosphere, however, the waves encounter another barrier, called the bow shock, which is the magnetic region of space that slows down solar wind particles before they collide with Earth’s magnetic field. The collision of the magnetic waves modifies the behavior of the bow shock, possibly changing the way it processes the energy of the incoming solar storm.

Behind the bow shock, the magnetic fields of Earth start to resonate at the frequency of the waves and this contributes to the transmission of the magnetic disturbance all the way to the ground. It is a fast process, taking around 10 minutes from the wave being generated at the foreshock to its energy reaching the ground.

Bottom line: Listen to an eerie song of Earth getting hit by a magnetic storm.

Source: First Observations of the Disruption of the Earth’s Foreshock Wave Field During Magnetic Clouds