You know how – when you’re standing at the front or bow of a moving boat – you can see a curved ridge of water moving out to either side of you? These are called bow waves, and objects in space create them, too. Unlike bow waves in water, which only occur on the water’s surface, cosmic bow shocks happen in three dimensions. NASA ScienceCasts posted a new video about them to YouTube on March 8, 2018. As the video points out:

There are bow shocks everywhere, even in space–and these cosmic bow shocks can tell scientists cosmic secrets.

Even the emptiest regions of space contain protons, electrons, atoms, molecules and other matter. When planets, stars, and the plasma clouds ejected from supernovae fly at a high speed through this surrounding medium, cosmic bow shocks are generated in that medium.

As mentioned in the video, Earth creates a bow shock, too, as we move in orbit around the sun. It happens when the solar wind (a stream of charged particles from the sun) meets Earth’s magnetosphere (the magnetic environment around Earth). Explanations of Earth’s bow shock get complicated and jargon-laden fast, but this Encyclopedia Britannica article about Earth’s magnetosphere provides a good picture of what’s happening, if you’re interested.

You’ll find a transcript of the NASA video here.

Also, if you’re interested in bow shocks, be sure to check out this cool article from 2011 about how the moon’s shadow creates waves in Earth’s atmosphere during a solar eclipse. The waves emanating from the moon shadow – as it penetrates the atmosphere and falls on Earth’s surface on eclipse day – happen much as a ship moving through the ocean creates waves at its bow and stern. 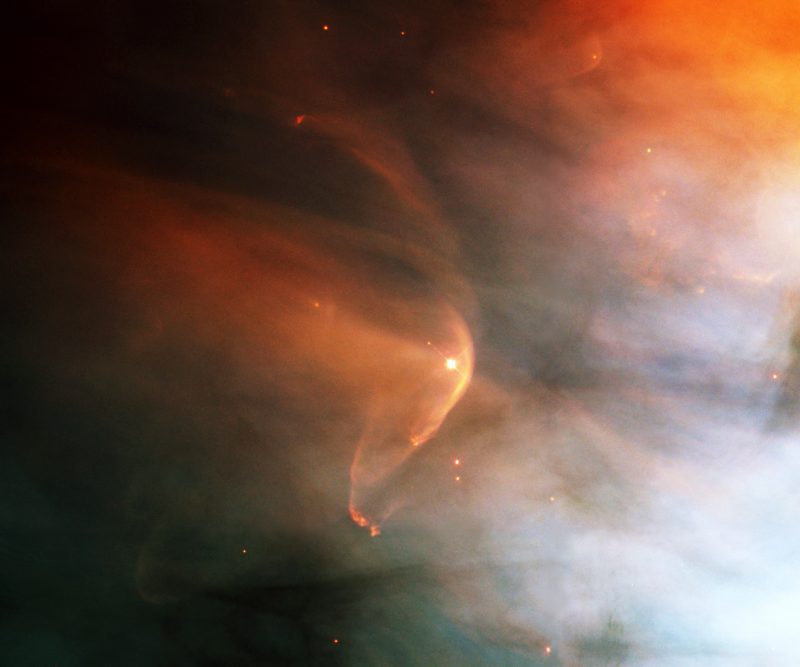 The Hubble Space Telescope obtained this beautiful image of a cosmic bow shock in February 1995. The bow shock – the arcing, graceful structure – is about half a light-year across, created from the wind from the star LL Orionis colliding with the general flow of gas and dust in the Orion Nebula. Image via Wikimedia Commons.

Bottom line: A new NASA ScienceCast about cosmic bow shocks, a word and a link about Earth’s bow shock, and a link to a story about the bow shock created by the moon’s shadow during a solar eclipse.