Thanks to the Kepler satellite, we now know of three planets orbiting in double star systems.

In early 2012, astronomers announced that the Kepler satellite has found two additional gas giant planets – which they’ve labeled Kepler-34b and Kepler-35b – orbiting binary or double star systems. The planets are approximately Saturn-sized. Only one other planet orbiting a double star – Kepler-16b – was previously observed; its discovery was announced in September, 2011. The Kepler collaboration reported the two most recent planets of double stars on January 11, 2012, in the journal Nature.

Kepler-34b orbits its two sun-like stars every 289 days, and the stars orbit one another every 28 days. Kepler-35b orbits its smaller and cooler host stars every 131 days, and the stellar pair orbit each other every 21 days. The planets reside too close to their parent stars to be in the “habitable zone”- the region where liquid water could exist on a planet’s surface.

Planets orbiting double stars were formerly the stuff of Issac Asimov novels and George Lucas films. But the authors of the Nature article estimate that for short-period binary systems – where two stars orbit each other on timescales similar to those mentioned above – at least 1% of them will host planets. This amounts to millions of systems, at least, not to mention the longer period double systems (some double stars take many years to orbit each other once) which the Nature article does not analyze.

As of this report, the Kepler satellite has currently located 2,326 candidate exoplanets, or planets orbiting stars other than our sun, but – other than the three planets mentioned above – all of these planets orbit single stars. Meanwhile, roughly one-third of all the star systems in the Milky Way are believed to be binary systems, where two gravitationally bound stars orbit each other. Only a handful of other systems are believed to be comprised of more than two stars, by the way. The star Castor in the constellation Gemini is believed to be a sextuple star system: three orbiting pairs of binaries!

The Kepler satellite, named in honor of the 17th century astronomer Johannes Kepler, was launched in 2009 with the precise mandate of locating Earth-like exoplanets, planets orbiting other stars. Prior to Kepler, while a few exoplanets had been discovered in the past, they were all very massive planets like Jupiter. Very massive planets, while relatively easy to detect, do not offer the possibility of Earth-like life. The Kepler satellite has offered us a look at the diverse planet landscape our galaxy offers.

The artist’s rendering depicts the multiple planet systems discovered by NASA’s Kepler mission. Out of hundreds of candidate planetary systems, scientists had previously verified six systems with multiple transiting planets (denoted here in red). Now, Kepler observations have verified planets (shown here in green) in 11 new planetary systems. Many of these systems contain additional planet candidates that are yet to be verified (shown here in dark purple). For reference, the eight planets of the solar system are shown in blue. Credit: NASA Ames/Jason Steffen, Fermilab Center for Particle Astrophysics

Astronomers detect binary star systems in a number of different ways. Some binaries are close enough to be resolved optically through telescopes. We can actually see the two separate stars! For star systems farther away, more clever methods must be employed.

Measuring the luminosity, or brightness, of distant points of light provides clues as to whether not not they might actually be double stars. The system Algol, the Demon Star, found in the constellation Perseus, was noticed by early stargazers to have a varying luminosity. It wasn’t until 1783 that early scientists recorded its brightness varying in a repetitive pattern, dimming about every three days for 10 hours. They proposed that Algol was actually a binary system with one star eclipsing the other for those 10 hours.

The frequencies of the emitted light from a star system are also utilized to determine the nature of the system. Stars, as our sun, produce electromagnetic radiation over a range of frequencies, or colors. Our sun actually produces mostly visible light, but also infrared and radio waves in the low frequency side of the spectrum, as well as ultraviolet and x-ray radiation in the upper frequency bands. These electromagnetic waves behave similarly to the sound waves we’re more familiar with. We’ve all noticed the Doppler effect as vehicles with sirens have passed us: the sound waves moving towards us become higher pitched, or higher frequency, the sound waves moving away from us become lower pitched. The same effect happens with the electromagnetic waves that are light. Astronomers can measure the light from these binary systems simultaneously become repetitively higher and lower ‘pitched,’ allowing us to ascertain that that there are in fact two stars simultaneously moving towards and away from us. 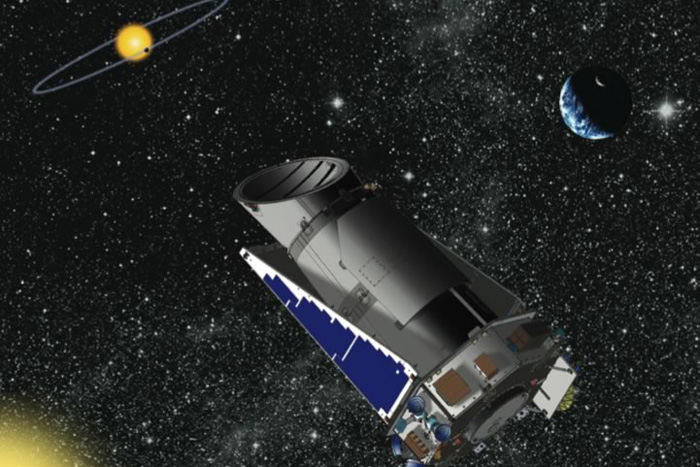 Nowadays, once astronomers find a double star system, the task may turn to detecting any possible planets in the system. The Kepler satellite utilizes a very similar method to the aforementioned luminosity measurement. Kepler maintains its camera on a particular section of the sky, towards the constellations Cygnus, Lyra, and Draco. It then patiently waits until one of the stars momentarily dip in luminosity. This is the signal of an exoplanet. This dimming is interpreted as a planet transiting across the face of the star. By measuring the amount of dimming and the frequency of occurrence, the characteristics of the planet, such as size and mass, can be ascertained. With this little bit of information, it is possible to determine if the planet is Earthlike or more similar to the giant gaseous planets in the outer reaches of our solar system, such as Jupiter.

Though its recent discovery of Earthlike planets as well as planets orbiting double stars, the Kepler satellite is offering us an unparalleled view into the diverse solar landscape.