Have you stood outside on a dark night and wondered how many of the countless stars have planets? Today, an international team of astronomers answered that question, and their answer is: most of them. They say our home galaxy, the Milky Way, is swarming with planets. Indeed, they say, most of the Milky Way’s 100 billion stars have planets similar to the earthlike worlds in our own solar system – Mercury, Venus, Earth and Mars. Their results are being published today (January 11, 2012) in the journal Nature.

If they’re right, it means there is a minimum of one planet for every star in the Milky Way, on average. It means that there should be a minimum of 1,500 planets within just 50 light-years of Earth.

These astronomers from around the globe are members of the PLANET (Probing Lensing Anomalies NETwork) collaboration. To learn how common planets might be in the Milky Way, they used gravitational microlensing – a powerful astronomical tool based on a natural phenomenon discovered in space in the past decades. That is, objects in space sometimes create a “lens” effect, almost like a magnifying glass, to reveal objects that would not otherwise be seen. The PLANET astronomers spent six years using this technique to survey millions of Milky Way stars, before concluding that planets are the rule rather than the exception. 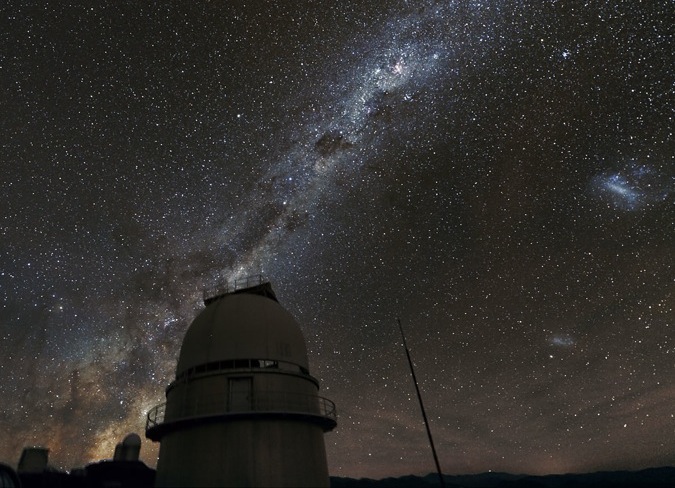 From our vantage point in the Milky Way galaxy, we see the galaxy’s edgewise disk full of stars as a starlit band across our sky. Image Credit: ESO/Z. Bardon, /ProjectSoft

Yet, only a couple of decades ago, astronomers were still desperately seeking planets orbiting other stars, and not quite finding them. They began finding them when their technology caught up with their desire. The first confirmed detection of an exoplanet orbiting a main-sequence star was made in 1995, when a giant planet was found in a four-day orbit around the nearby star 51 Pegasi. As of December 22, 2011, astronomers have found a total of 716 extrasolar planets – planets orbiting stars other than our sun.

They found most of the currently known exoplanets either by detecting the pull of the planet’s gravity on its host star, or by catching the planet as it passes in front of its star as seen from Earth, slightly dimming the star’s light as seen from our vantage point. Both of these techniques are more sensitive to finding planets that are either large and massive – or close to their stars – or both. So most known exoplanets are not earthlike. They are bigger – like Jupiter. 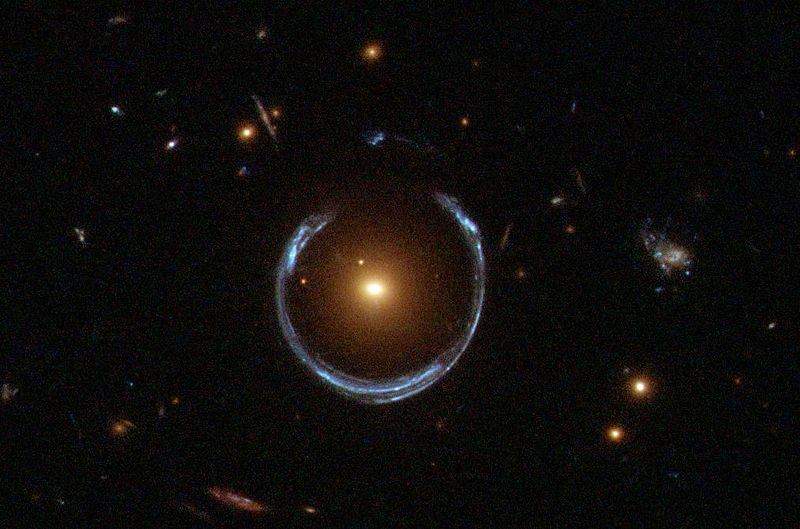 The blue ring in this image is a gravitational lens mirage. The gravity of a luminous red galaxy has gravitationally distorted the light from a much more distant blue galaxy. This lensing effect was predicted by Albert Einstein over 70 years ago, so rings like this are now known as Einstein Rings. The effect lets astronomers identify distant objects – either hugely massive ones like galaxies, or small mass objects like planets – which could not otherwise be seen. Image Credit: Wikimedia Commons

Enter gravitational microlensing, which is more sensitive to earthlike worlds in distant space.

But, they say, the technique requires special conditions to work. You need to have two stars that lie on a straight line in relation to us here on Earth. Then the light from the background star is amplified by the gravity of the foreground star, which thus acts as a magnifying glass, possibly revealing planets, if planets exist in that star system.

If you searched for them one by one, finding two planets that are passing by each other closely enough to create a microlens would be like finding a needle in a haystack. However wide-field survey campaigns such as OGLE (Optical Gravitational Lensing Experiment) and MOA (Microlensing Observations in Astrophysics) cover millions of stars every clear night in order to identify and alert stellar microlensing events as early as possible. Follow-up collaborations, such as PLANET, monitor selected candidates more frequently, 24 hours a day, using a round-the-world network of telescopes. 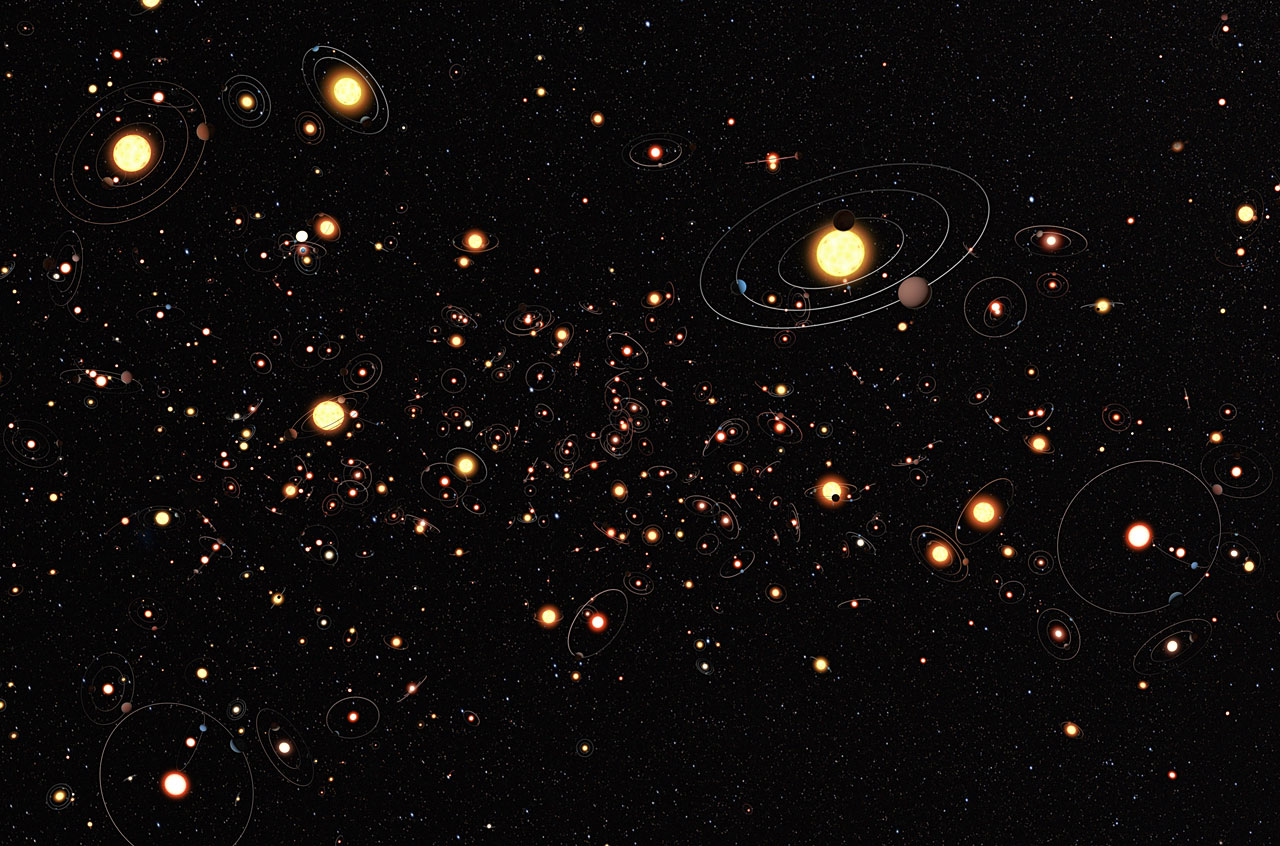 Using a statistical analysis, the team concluded that one in six of the stars studied hosts a planet of similar mass to Jupiter, half have Neptune-mass planets and two-thirds of the stars have Earth-mass planets. The survey was sensitive to planets between 75 million kilometers and 1.5 billion kilometers from their stars (in the solar system this range would include all the planets from Venus to Saturn) and with masses ranging from five times the Earth up to 10 times Jupiter.

We have searched for evidence for exoplanets in six years of microlensing observations. Remarkably, these data show that planets are more common than stars in our galaxy. We also found that lighter planets, such as super-Earths or cool Neptunes, must be more common than heavier ones.

Bottom line: An international team of astronomers has used gravitational microlensing to conclude that the the Milky Way has some 100 billion planets, at least. That means a minimum of one planet for every star in the Milky Way, on average. It means that there should be a minimum of 1,500 planets within just 50 light-years of Earth. The journal Nature is publishing their results on January 12, 2012.