Earthlike moons might exist in the habitable zones around double star systems, according to astronomers from the University of Texas at Arlington.

Remember Tatooine, the wholly fictional desert world mentioned or appearing in every Star Wars film – site of that dramatic double sunset that let movie-watchers know, early in the film and early in the film series (1977), that Star Wars had some very cool special effects? Astrophysicists from The University of Texas at Arlington suggest that an Earthlike moon, reminiscent of the fictional Tatooine, could in fact exist in a double-star system. They’re presenting their results this week at the American Astronomical Society winter meeting, which began today (January 9, 2012) in Austin, Texas.

The researchers point to a real-life double-star system – Kepler-16 – which made headlines in September 2011. That was when researchers at NASA’s Kepler space telescope mission announced Kepler-16b, a distinctly un-earthlike planet – cold, gaseous – orbiting both stars. 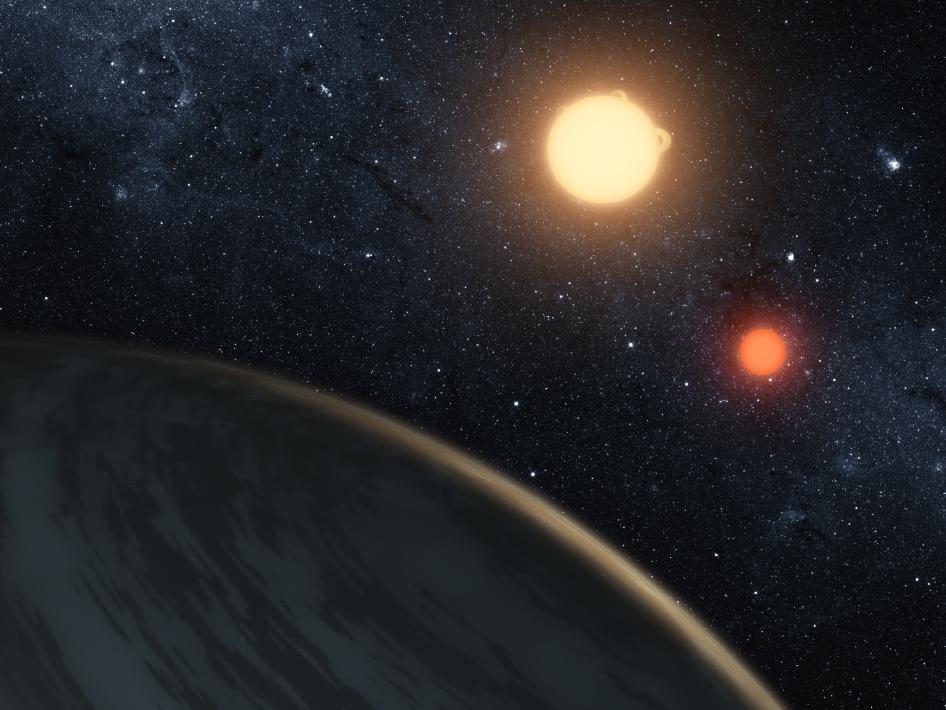 So far, no earthlike planet has been discovered in the Kepler-16 double-star system. But the team from UT Arlington thinks one might exist in the system’s habitable zone, as an exomoon – or extrasolar moon, a natural satellite – orbiting Kepler-16b. 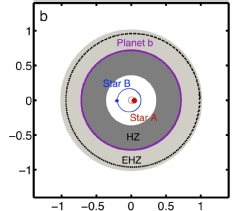 An illustration of the habitable zone and extended habitable zone in the Kepler-16 System. The axes are given in Astronomical Units (A.U.), with one A.U. equalling the distance between our own Earth and sun. Via University of Arlington

No extrasolar moons have yet been observed yet in the Kepler-16 system, or anywhere else, but that doesn’t keep astronomers from wondering about them. In fact, they might be common, since exoplanets – now that we have sufficient technology to detect them – seem to be all around us.

The UT Arlington astronomers think an extended habitable zone might exist outside the orbit of the gaseous planet Kepler-16b, under certain conditions. To host life in that zone, a terrestrial planet orbiting the two stars would need to have high levels of warming greenhouse gases in its atmosphere such as carbon monoxide or methane, they said.

Bottom line: Researchers at University of Texas at Arlington suggest that Kepler-16b – a cold, gaseous planet known to orbit the double-star Kepler-16 – could conceivably have a moon in the double-star’s habitable zone. They announced their results this week at the winter meeting of the American Astronomical Society, which began January 9, 2012.

Read more via University of Texas at Arlington