Saturday’s heartbreaking loss of contact with the Vikram lander – part of the Chandrayaan-2 mission to the moon – hasn’t changed the upbeat tone of India’s space science. Here’s what we know so far. 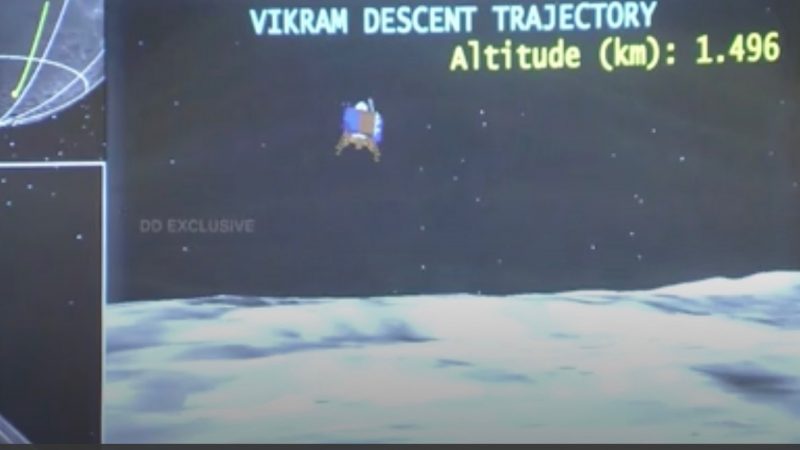 This was the view on computer screens at the Chandrayaan-2 mission control center in Bengaluru, India, just minutes before space scientists lost communications with the Vikram lander on Saturday. Image via ISRO/Space.com.

Only three nations of Earth – the former Soviet Union, the U.S. and, as of this year, China – have successfully landed spacecraft on the moon. On September 7, 2019, India hoped to become the fourth nation to soft land on the moon successfully, with the Vikram lander in its Chandrayaan-2 mission. But, only minutes before touchdown, something happened; communications with the lander were lost.

K. Sivan, chief of the Indian Space Research Organization (ISRO), said in his first TV interview after the attempted landing:

Powered descent included four stages. The first three phases were executed nicely, but the last one was not executed in a nice way and we lost the link with the lander.

He also described the mission as 90% to 95% successful so far.

Throughout the day on Saturday, there were the inevitable comparisons of Vikram’s situation with the crash landing on the moon of Israel’s Beresheet spacecraft in April 2019. For example, in an article posted Saturday at PlanetarySociety.org, Jason Davis mentioned Israel’s attempt as he described the scene at Chandrayaan-2’s mission control center in Bengaluru, India:

Just moments before landing, telemetry screens at the Indian Space Research Organisation (ISRO) mission control center froze, in a scene eerily reminiscent to the crash of Israel’s Beresheet lander in April. Those screens reported the spacecraft was traveling at a horizontal speed of about 48 meters per second and a vertical speed of about 60 meters per second, just over 1 kilometer from the landing site. A flight controller said communications with NASA’s Deep Space Network in Madrid had stopped. Several minutes later, K. Sivan said that Vikram’s descent was nominal until an altitude of 2.1 kilometers, and communications were lost shortly thereafter.

When Israel’s Beresheet lander crashed in April, the reason was said to be that its gyroscopes had failed, causing its main engine to shut down and resulting in a crash to the lunar surface.

But what happened to Vikram?

At this writing, we do not know. In fact, ISRO is still trying to contact the lander. Hindustantimes.com reported that these efforts will continue during the next 14 Earth-days (one period of lunar daylight).

#Chandrayaan2 mission was a highly complex mission, which represented a significant technological leap compared to the previous missions of #ISRO to explore the unexplored south pole of the Moon.

It’s possible, in other words, that Vikram did not crash, that the problem is simply one of communications. Former ISRO Director D. Sasikumar sounded upbeat on Saturday when he told ANINews:

ISRO’s Chandrayaan-2 mission update page also posted information on September 7, pointing out that the mission’s orbiter is still there, still orbiting the moon, and still able to gather date. In fact, the update said, the orbiter is expected to explore the moon’s surface from above for the coming seven years, in contrast to its original mission timeline of one year:

Chandrayaan-2 mission [is] a highly complex mission, which represented a significant technological leap compared to the previous missions of ISRO, which brought together an orbiter, lander and rover to explore the unexplored south pole of the moon.

Since the launch of Chandrayaan-2 on July 22, 2019, not only India but the whole world watched its progress from one phase to the next with great expectations and excitement. This was a unique mission which aimed at studying not just one area of the moon but all the areas combining the exosphere, the surface as well as the sub-surface of the moon in a single mission.

The orbiter has already been placed in its intended orbit around the moon and shall enrich our understanding of the moon’s evolution and mapping of the minerals and water molecules in the polar regions, using its eight state-of-the-art scientific instruments. The orbiter camera is the highest resolution camera (0.3m) in any lunar mission so far and shall provide high resolution images which will be immensely useful to the global scientific community. The precise launch and mission management has ensured a long life of almost seven years instead of the planned one year.

The Vikram lander followed the planned descent trajectory from its orbit of 35 km to just below 2 km above the surface. All the systems and sensors of the lander functioned excellently until this point and proved many new technologies such as variable thrust propulsion technology used in the lander. The success criteria was defined for each and every phase of the mission and to date 90 to 95% of the mission objectives have been accomplished and will continue contribute to lunar science , notwithstanding the loss of communication with the lander.

It’s also likely that ISRO will use the Chandrayaan-2 orbiter to view Vikram’s proposed landing site to gather more information about the fate of the lander.

Before and after comparison of the proposed touchdown site of Israel’s Beresheet moon lander, which crashed while attempting landing last April. This image is from NASA’s Lunar Reconnaissance Orbiter. India is likely to attempt to use its own Chandrayaan-2 orbiter to view Vikram’s proposed landing site, to determine if the lander crashed, or if it is intact but with communications lost. Read more about this image.

Bottom line: The Vikram lander of the Chandrayaan-2 mission was scheduled to touch down on the moon on September 7, 2019. As of now, communications with the lander have been lost; however, India’s space scientists remain upbeat.