NASA released before and after images of the spot on the moon where Israel’s Beresheet spacecraft crash-landed on April 11.

Before and after comparison of the landing site. Date in lower left indicates when the image was taken. It appears the spacecraft landed from the north on the rim of a small crater, about a few meters wide, leaving a dark “smudge” on Mare Serenitatis that’s elongated towards the south. Image via NASA/GSFC/Arizona State University.

Last week (May 15, 2019) NASA released a series of photographs that show the impact site of Israel’s Beresheet moon lander. The washing machine-sized probe crashed into the moon on April 11, 2019, after a malfunction caused its descent engine to shut down during its attempt to land.

The photos were taken by NASA’s Lunar Reconnaissance Orbiter (LRO). The “after” image of the impact site – on an ancient lunar volcanic field called the Sea of Serenity (Mare Serenitatis) – was captured on April 22, 11 days after the crash, as soon as LRO’s orbit placed it over the spacecraft’s attempted landing site. In the image, you can see a dark smudge where Beresheet landed. No smudge is visible in a “before” photo (taken in 2016). 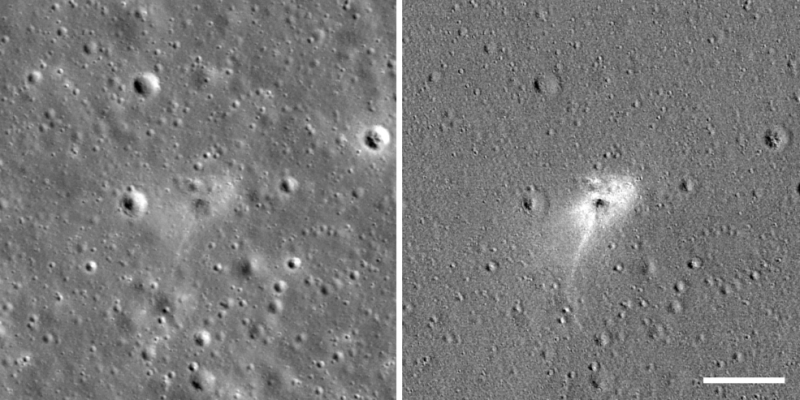 Left: Beresheet impact site. Right: An image processed to highlight changes near the landing site among photos taken before and after the landing, revealing a white impact halo. Other craters are visible in the right image because there is a slight change in lighting conditions among the before and after images. Image via NASA/GSFC/Arizona State University.

LRO took these images from 56 miles (90 km) above the surface. The cameras captured a dark smudge, about 33 feet (10 meters) wide, that indicates the point of impact. The dark tone suggests a surface roughened by the hard landing, NASA said, which is less reflective than a clean, smooth surface.

When it hit, Beresheet was going more than 2,200 miles per hour, or about 1,000 meters per second, faster than intended, according to Mark Robinson, a geologist at Arizona State University and the principal investigator of LRO’s imaging system.

From so far away, LROC could not detect whether Beresheet formed a surface crater upon impact. It’s possible the crater is just too small to show up in photos. Another possibility is that Beresheet formed a small indent instead of a crater, given its low angle of approach (around 8.4 degrees relative to the surface), light mass (compared to a dense meteoroid of the same size), and low velocity (again, relative to a meteoroid of the same size; Beresheet’s speed was still faster than most speeding bullets).

The light halo around the smudge could have formed from gas associated with the impact or from fine soil particles blown outward during Beresheet’s descent, which smoothed out the soil around the landing site, making it highly reflective.

Bottom line: Before and after images of the crash site on the moon of Israel’s Beresheet spacecraft.