Icy heart of Comet Hartley 2 is tumbling, at a changing rate

Astronomers from the Planetary Science Institute say the discovery of the changing rate of rotation of the nucleus of Comet Hartley 2 is a first.

Comet Hartley 2’s nucleus – the solid, central part of a comet, sometimes called a dirty snowball – is tumbling at a rate that changes over time. This discovery of the changing rotation rate of a cometary nucleus is a first, according to the Planetary Science Institute which posted a press release about it on May 16, 2011.

A Planetary Science Institute senior scientist, Nalin H. Samarasinha, described the changing rotation rate of the nucleus of this small comet – which orbits the sun every 6.46 years – in a paper titled Rotation of Comet 103P/Hartley 2 from Structures in the Coma that appears in Astrophysical Journal Letters. 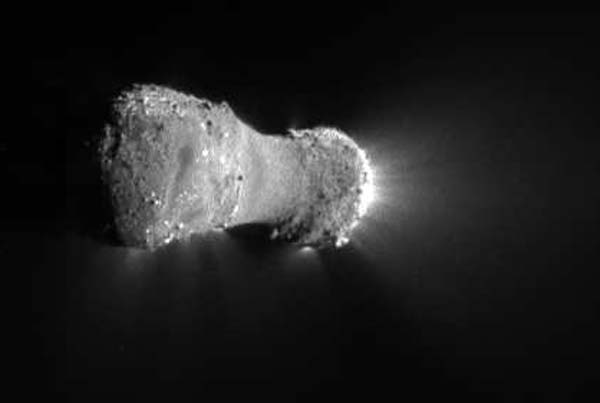 These findings, as well as information gleaned from a recent NASA EPOXI spacecraft flyby of Comet 103P/Hartley 2, are expected to offer new insights as researchers try to understand comets and the role they might play in aiding human exploration of our solar system. Moreover, the astronomers conducting this research say that information such as this on Hartley 2 could offer the early tools researchers need to determine the best way to deal with a comet on a collision course with Earth. Samarasinha said:

Although extremely rare, comets can collide with Earth. This could cause regional or global damage to the environment and to life on Earth. However, fortunately, for the first time we are on the threshold of our technical know-how to mitigate such a hazardous impact. In order to do that we need to know the material properties of comets. The most appropriate mitigation strategy for a strong rigid body is different from that for a weakly bound agglomerate.

Understanding the makeup of comets has immediate relevance to planetary explorations efforts. Small bodies of the solar system such as asteroids and comets could potentially act as way stations, as well as to supply needed resources, for the human exploration of the solar system. For this purpose, it is necessary to know the properties and the character of these objects to maximize our investment.

The research team analyzed images of Comet Hartley 2 as it tumbled while traveling in its orbit around the sun. Astronomers took the images across 20 nights between September 1 and December 15, 2010 using the 2.1-meter telescope at Kitt Peak National Observatory near Tucson, Arizona.

The astronomers used a blue filter that isolates the light emitted by cyanogen (CN) molecules to observe cyanogen in Comet Hartley 2’s coma, which is a dusty atmosphere surrounding the comet’s tiny nucleus. The coma is much, much larger than the nucleus, which, in Comet Hartley 2’s case, is only 2 kilometers – or less than a mile – in length. The observations showed clear variations in the amount of cyanogen in Hartley 2’s coma over time scales ranging from a few hours to more than several days. Samarasinha said:

The rotational state of a comet’s nucleus is a basic physical parameter needed to accurately interpret other observations of the nucleus and coma. Analysis of these cyanogen features indicates that the nucleus is spinning down and suggests that it is in a state of a dynamically excited rotation. Our observations have clearly shown that the effective rotation period has increased during the observation window.

Hartley 2, a relatively small comet with a 2-kilometer long nucleus, is highly active for its size, he said. It is experiencing rotational changes due to torque caused by jets of gases emitting from the icy body.

Bottom line: Planetary Science Institute senior scientist Nalin H. Samarasinha has determined that Comet Hartley 2 is tumbling through space as it orbits the sun, at a rate that changes over time. Astronomers used the 2.1-meter telescope at Kitt Peak National Observatory near Tucson, Arizona between September 1 and December 15, 2010 to take blue-filter photos of the comet’s coma. These images revealed changing levels of cyanogen in the coma. Information from a November 2010 flyby of Comet 103P/Hartley 2 by NASA’s EPOXI spacecraft is also contributing to our knowledge of this comet.

Don Yeomans with the truth about Comet Elenin