Don Yeomans with the truth about Comet Elenin

Comet Elenin will sweep past Earth in late 2011. NASA’s Don Yeomans says its passage is nothing unusual and no dramatic events are expected.

You might have heard of Comet Elenin, which will sweep into the inner solar system in the northern hemisphere fall of 2011.

For some reason astronomers don’t understand, this comet has been associated by doomsdayers with various prophecies (“Thirst and famine when the comet will pass.” – Nostradamus: Century 2, Quatrain 62). Yet it is only an ordinary comet after all. At its closest point, Elenin will pass 35 million kilometers (22 million miles) from us, or nearly 100 times the moon’s distance, according to Don Yeomans of NASA’s Near-Earth Object Program Office at NASA’s Jet Propulsion Laboratory in Pasadena, California. He said:

That is what happens with these long-period comets that come in from way outside our planetary system. They make these long, majestic, speedy arcs through our solar system, and sometimes they put on a great show.

Yeomans said that Elenin might not put on a great show, however, and that, at present, it looks “kind of wimpy.” Comet Elenin should be at its brightest shortly before the time of its closest approach to Earth on October 16, 2011. 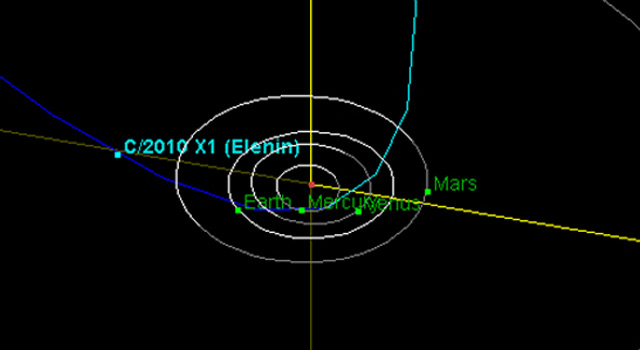 Leonid Elenin, an observer in Lyubertsy, Russia, first spotted Comet Elenin on Dec. 10, 2010. He made the discovery remotely – that is, by using a telescope in another part of the world, in this case the ISON-NM observatory near Mayhill, New Mexico.

At the time of the discovery, the comet was about 647 million kilometers (401 million miles) from Earth. Over the past four and a half months, the comet has – as comets do – closed the distance to Earth’s vicinity as it makes its way closer to perihelion (its closest point to the sun). As of May 4, 2011, Elenin’s distance was about 274 million kilometers (170 million miles).

Why does Yeomans think this comet might turn out to be “wimpy,” after all?

We’re talking about how a comet looks as it safely flies past us. Some cometary visitors arriving from beyond the planetary region – like Hale-Bopp in 1997 – have really lit up the night sky where you can see them easily with the naked eye as they safely transit the inner solar system. But Elenin is trending toward the other end of the spectrum. You’ll probably need a good pair of binoculars, clear skies, and a dark, secluded location to see it even on its brightest night.

Comet Elenin on May 5, 2011 when it was 170 million miles (274 million kilometers) from Earth. Each picture is a combination of frames taken through green, red, and infrared filters. The stars appear as 3 separate images because the comet moved between each frame. Via astronomers Paul Weissman, Michael Hicks, and James Somers. Hicks and Somers were using the 24-inch (0.6-meter) AstroMechanics Telescope and CCD camera at JPL’s Table Mountain Observatory.

How about the stories circulating on the Internet about Elenin? Can this icy interloper influence us from where it is or where it will be in the future? What about this celestial object inspiring some shifting of the tides or even tectonic plates here on Earth? There have been some incorrect Internet speculations that external forces could cause Comet Elenin to come closer. Yeomans disagrees.

Comet Elenin will not encounter any dark bodies that could perturb its orbit, nor will it influence us in any way here on Earth. It will get no closer to Earth than 35 million kilometers [about 22 million miles].

Comet Elenin will not only be far away, it is also on the small side for comets. And comets are not the most densely-packed objects out there. They usually have the density of something akin to loosely packed icy dirt. So you’ve got a modest-sized icy dirtball that is getting no closer than 35 million kilometers. It will have an immeasurably miniscule influence on our planet. By comparison, my subcompact automobile exerts a greater influence on the ocean’s tides than comet Elenin ever will.

Yeomans did have one final thought on Comet Elenin:

This comet may not put on a great show. Just as certainly, it will not cause any disruptions here on Earth. But there is a cause to marvel. This intrepid little traveler will offer astronomers a chance to study a relatively young comet that came here from well beyond our solar system’s planetary region. After a short while, it will be headed back out again, and we will not see or hear from Elenin for thousands of years. That’s pretty cool.

NASA detects, tracks, and characterizes asteroids and comets passing relatively close to Earth using both ground- and space-based telescopes. The Near-Earth Object Observations Program, commonly called “Spaceguard,” discovers these objects, characterizes a subset of them, and predicts their paths to determine if any could be potentially hazardous to our planet.

Bottom line: Comet Elenin will be at its brightest right before coming closest to Earth – 22 million miles away – on October 16, 2011. Don Yeomans of NASA’s Near-Earth Object Program Office at NASA’s Jet Propulsion Laboratory in Pasadena, California, said it will have an “immeasurably miniscule influence” on Earth, but will provide astronomers the opportunity to study a relatively young comet.

Don Yeomans with the truth about close-passing asteroid Apophis