Will the IAU democratize the way it names space objects?

The International Astronomical Union’s decision to demote Pluto from full planet status was unpopular. Will these astronomers change the way they do things?

Exoplanet discovery has been big business in recent years. There are 861 known exoplanets – planets orbiting distant stars – as of March 25, 2013 according to exoplanet.eu. Some astronomers estimate that our Milky Way galaxy might contain a 100 billion expoplanets. Meanwhile, the IAU – the international body of astronomers that, since its inaugural meeting in 1922, has taken upon itself the responsibility for standardizing, designating and naming space objects, has waffled about whether it will give proper names to planets orbiting other suns. In late March, I noticed the IAU had changed its mind again about how to do this. Since other groups of astronomers have recently used a system of popular voting to suggest names for space objects, showing the awesome power of crowdsourcing, I suspect the IAU may be feeling the heat to democratize the naming of space objects in general, and exoplanets in particular. 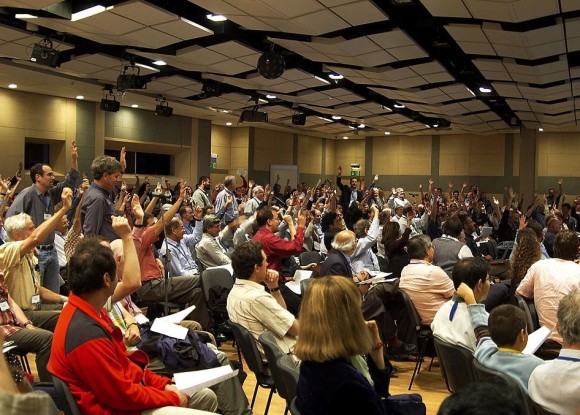 IAU astronomers, voting at a meeting.

Here are some facts. In 2006, an IAU committee voted to demote Pluto from full planet status. That was an extremely unpopular decision among many members of the general public (and among some astronomers). Even today, if you mention Pluto’s loss of full planet status on a social media page such as EarthSky’s Facebook page, you’ll receive back an outpouring of emotion.

In 2009, the IAU says a committee of its Commission 53 Extrasolar Planets discussed the possibility of giving popular names to exoplanets in addition to their existing catalogue designations (for example, Alpha Centauri Bb). No consensus was reached, but the majority on the committee of astronomers who discussed the idea was not in favour of this possibility at that time. That remained true as late as last week, when I happened to check the IAU’s exoplanet page while writing about Uwingu’s campaign to name Alpha Centauri Bb. On March 21, 2013, on its website, the IAU said it was developing:

… a system for clear and unambiguous scientific designation of [exoplanets] at all stages during their study, from tentative identification to fully-characterized objects …

In response to frequent questions about plans to assign actual names to extra-solar planets, the IAU sees no need and has no plan to assign names to these objects at the present stage of our knowledge. Indeed, if planets are found to occur very frequently in the universe, a system of individual names for planets might well rapidly be found equally impracticable as it is for stars, as planet discoveries progress.

… considering the ever increasing interest of the general public in being involved in the discovery and understanding of the universe, the IAU decided in 2013 to restart the discussion of the naming procedure for exoplanets and asses the need to have popular names as well. In 2013 the members of Commission 53 will be consulted in this respect and the result of this will be made public on this page. 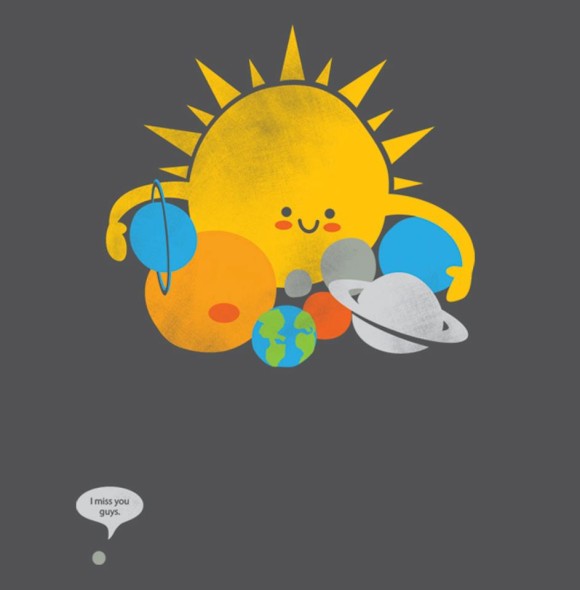 The IAU’s decision to demote Pluto from full planet status was unpopular and has led other organizations to lead the way toward crowdsourced names for space objects. Image via IF…ingLoveScience on Facebook.

Two newly discovery moons of the planet Pluto may received names voted on in a contest organized by the SETI Institute. The names are Vulcan and Cerberus.

What changed the IAU’s mind? In late February 2013, the SETI Institute in Mountain View, California, conducted a contest to suggest names for newly discovered moons of Pluto. Now, Pluto’s newest moon might be called Vulcan, a name suggested by actor William Shatner, who played Captain Kirk in the original Star Trek TV series, following an online campaign by the show’s fans. Vulcan received nearly 200,000 votes among the 450,000 cast during a two-week contest. The second recently-discovered moon will be called Cerberus, after the three-headed dog that guarded the gates of the underworld, which received 100,000 votes. In media reports, it’s said the SETI Institute is now waiting for IAU approval of these names.

Then, in March, the space company Uwingu announced another people’s choice competition for naming the newly found planet orbiting Alpha Centauri B. When asked for a comment on the IAU’s change of mind this morning, Uwingu CEO – planetary scientist and former NASA science boss Dr. Alan Stern – told EarthSky:

I’m encouraged. I just hope the IAU recognizes that in this 21st century world of Internets, social networks, and flattened, more democratized publishing, that the members of the IAU – who are small in number – have no greater authority than what large numbers of people think.

Uwingu is leading the charge toward crowdsourced names of exoplanets. Artist’s image via Uwingu.

When asked why Uwingu was organizing its efforts as a vote to name Alpha Centauri Bb, Stern also said:

Why do we believe it’s time to democratize? First, there’s no reason not to. It increases public interest in astronomy by personally involving people. It’s a great way to increase interest in schools too, and we just can’t find any good reason for elite, behind-closed-doors committees to appoint themselves any longer to be the gatekeepers on astronomical names.

By the way, Stern also said that examples of suggested names so far for Alpha Centauri Bb are “all over the map” and include names of politicians, scifi heros, Greek gods, personal/family names, sports teams.

One person even nominated EarthSky. Hey, thanks Ellen Butler! Check out and vote: https://www.uwingu.com/vote-on-planet-names/ You can sort the list various ways. And vote for us!

Bottom line: As recently as March 21, 2013, the International Astronomical Union (IAU) said it had no plans to give proper names to exoplanets. But on March 25, 2013, the IAU’s website stated that it “decided in 2013 to restart the discussion of the naming procedure for exoplanets and asses the need to have popular names as well.” The likely reason are recent campaigns by groups of astronomers, including the SETI Institute and the space company Uwingu, which have organized their own campaigns for creating popular names of objects in space.