The Hubble Space Telescope has peered in the direction of a strange, glowing green cloud of gas – called by the Dutch name Hanny’s Voorwerp – to find that it is lit up by the bright light of a nearby quasar, and shows signs of ongoing star formation.

You can see the whole story in pictures, below: 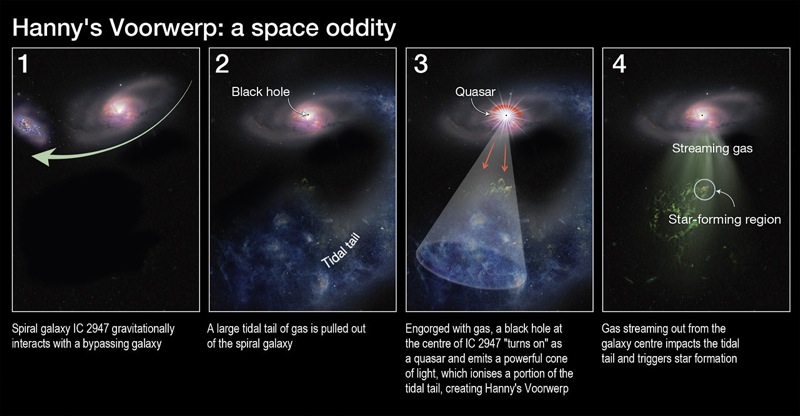 Astronomers have called this crazy green cloud a “space oddity” and “one of the strangest space objects ever seen.” It’s located located about 650 million light-years from Earth and faces the spiral galaxy IC 2497. It’s about the size of our entire Milky Way galaxy, or about 100 thousand light-years across.

Hanny’s Voorwerp – which means simply “Hanny’s Object” in Dutch – was named after Hanny van Arkel, a Dutch schoolteacher who discovered it in 2007 while participating in the online Galaxy Zoo project. Galaxy Zoo and Galaxy Zoo Hubble, by the way, are very cool projects that enlist the public to help classify more than a million galaxies cataloged in the Sloan Digital Sky Survey, plus tens of thousands of galaxies in deep imagery from the Hubble Space Telescope.

Plus clever people like Shireen Gonzaga, who wrote a post on photographing snowflakes for us, have learned to use the Galaxy Zoo to write their name in galaxies.

Back to Hanny’s Voorwerp. I’m beginning to love saying that name. The new Hubble images reveal that gas in the nearby galaxy IC 2497 is interacting with a small region of Hanny’s Voorwerp, which is collapsing and forming stars. The youngest stars are a couple of million years old.

Also, it turns out the Voorwerp is visible because a searchlight beam of light from the galaxy’s core has illuminated it. This beam came from a quasar — a bright, energetic object that is powered by a black hole. The quasar is thought to have turned off less than 200 000 years ago.

So that’s the latest from the Hubble Space Telescope on the green cloud of gas known as Hanny’s Voorwerp. The cloud now appears to be lit up by the bright light of a nearby quasar, and shows signs of ongoing star formation.

Thank you! Your submission has been received!
Oops! Something went wrong while submitting the form.
END_OF_DOCUMENT_TOKEN_TO_BE_REPLACED