Top 10 tips for seeing the supernova

A cosmic explosion – a supernova – from 21 million light-years away has been in the news. To see it, find a star party and experienced observers.

UPDATE THURSDAY, SEPTEMBER 8, 2011 The moon is now waxing toward full. It’ll be the northern hemisphere’s Harvest Moon, one of the most beloved full moons of the year – but not beloved by supernova watchers, since its light will drown faint stars – and the galaxy containing Supernova 2011fe – from view.

Supernova 2011fe brightens from nothing in these early images taken with the 48-inch (1.2-m) Schmidt telescope at Palomar Observatory on the evenings of August 22, 23, and 24, 2011. As of August 29, the supernova had become brighter than the galaxy’s nucleus in amateur telescopes. The supernova might have peaked in brightness on September 5, says Skyandtelescope.com. (Peter Nugent / Palomar Transient Factory)

And be sure of this. By ordinary standards, this supernova is also very faint. And yet, according to AstroBob, it is the 6th brightest supernova ever seen outside the Milky Way system. Both Bob and Skyandtelescope.com agree that Supernova 2011fe might have peaked in brightness around September 5 at magnitude 10.2. That means it has never been bright enough to see with the eye – and it is even too faint to see with ordinary binoculars.

Your best bet for seeing the supernova is to find an astronomy club near you! Notice the NASA Night Sky Network widget on the right side of this page. Maybe it can help you find a “star party,” where experienced observers with telescopes can point out M101 – the galaxy in which the supernova resides. How will you know which star is the supernova? At this point, to see the supernova, you need an experienced amateur astronomer with a telescope to help you. If you do locate a club in your area, call them to find out if they’re holding impromptu supernova viewings this month.

UPDATE SUNDAY, SEPTEMBER 4, 2011. Despite the video at the bottom of this post, in which an astronomer says the supernova can be seen in “decent-sized” binoculars, experts are now saying the supernova will be around 10th magnitude in brightness. That is very faint. You will need a very large pair of binoculars (AstroBob says to try 80mm binoculars) – mounted on a tripod – to see a 10th magnitude object. You could also use nearly any small telescope. With the moon waxing in the evening sky, casting more and more of its light into the sky and drowning fainter stars, tonight might be your last good chance to see this, assuming you have enough optical aid.

FRIDAY, SEPTEMBER 3, 2011 On the weekend of September 3-4, 2011 – if you live in the northern hemisphere, and if you have patience and a good pair of binoculars – you’ll have an opportunity to witness what the ancients might have thought was a “new” star – a star that pops into view suddenly where no star was before. We today know it as an exploding star, or supernova.

Astronomers believe it might become the brightest Type 1a supernova of the last 30 years. 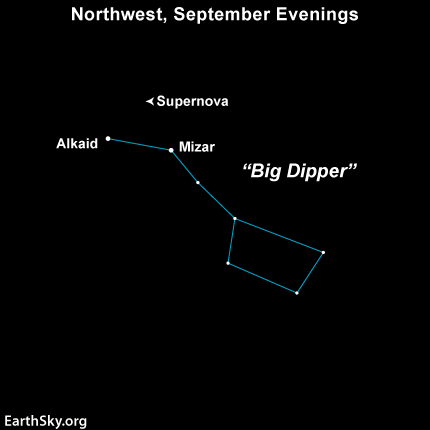 Notice the last two stars in the handle of the Big Dipper. These stars are Mizar and Alkaid. Make an even-sided triangle with these two stars to find the supernova.

1. Which way do I look? The supernova – called Supernova 2011fe by astronomers – is located near the familiar Big Dipper pattern in our skies. At this time of year, the Big Dipper can be found in the northwestern sky in the hours after sunset.

2. What time of night? Don’t wait too late at night, or the Big Dipper will have set below your northwestern horizon.

3. How do I recognize the Big Dipper? The Big Dipper consists of seven fairly bright stars in a dipper pattern. Notice that the Dipper has two parts – a bowl and a handle.

4. How do I find the supernova in the Big Dipper? You want to be looking at the last two stars in the handle of the Dipper. These stars are Mizar and Alkaid. Pretend you are drawing an equilateral, or even-sided, triangle on the sky, using Mizar and Alkaid to mark two points of the triangle. The supernova will be located at the third point of your imaginary triangle.

See how Mizar appears as two stars close together? That fact will help you be sure you’re seeing the right stars. Use this chart to ‘star hop’ from Mizar to the supernova. This beautiful chart is via AstroBob. Thanks to John for showing it to us!

8. Can I use my telescope to see the supernova? Yes. Skyandtelescope.com says the supernova should be within the limits for a 4-inch or larger ‘scope.

10. Can I see the supernova from my backyard? Maybe. A tip from veteran skywatchers: pack up a picnic supper, grab the family and head out to the country to see the supernova. State parks are a great place to set up. You’ll have a much better chance of seeing it, and you’ll enjoy the view so much more.

Astronomers say the supernova will remain visible with binoculars in our sky for about a week to 10 days – say, the first 10 days of September. Are they right? Only time will tell.

The supernova’s light comes to us from the Pinwheel Galaxy, also known as M101. Will you see the supernova in front of the galaxy? Maybe, if your sky is dark enough. The galaxy will look like a hazy patch. Image Credit: BJ Fulton, LCOGT

Scientists at Lawrence Berkeley National Laboratory (Berkeley Lab) and the University of California, Berkeley caught this supernova just hours after its explosion, a rare feat made possible with an automatic survey telescope and state-of-the-art computational tools. The brightness of this Type 1a supernova has been steadily increasing since the telescope first caught sight of it on August 24, 2011. Berkeley Lab’s Peter Nugent explains more in the video below.

This supernova is a mere 21 million light-years away from Earth, a relatively small distance by astronomical standards. It actually exploded 21 million years ago. The light from the explosion took 21 million years to reach Earth.

One last thing – that old bugaboo – the moon. The moon is waxing now, getting brighter, casting more light in the sky and obscuring fainter stars. How long will you be able to see the supernova in the light of the moon? It depends on how bright it gets. Again, no one really knows for sure how bright the supernova will become – although astronomers have a pretty good idea, based on the behavior of other objects of this type. Best to look for it as soon as possible, though, before the moon gets too bright.

Bottom line: By September 8, 2011 Supernova 2011fe had become too faint for casual observers to find, but experienced amateur astronomers – with telescopes – can still see it. Best bet for seeing it is to find a “star party” in your area. To find one, notice the NASA Night Sky Network widget on the right side of EarthSky’s Tonight page. Even if you don’t see the supernova, you’ll have fun and enjoy standing out under the night sky.

A powerful supernova explodes relatively near to Earth

More info about seeing the supernova from Skyandtelescope.com

More info about seeing the supernova from AstroBob