A powerful supernova explodes relatively near to Earth

A supernova which exploded on August 24 is getting brighter. Scientists believe that in about seven to 10 days, it will be visible from Earth with binoculars.

A dying star’s explosion in a galaxy that is relatively close to Earth (some 21 million light-years away) was photographed by an automatic U.S. telescope a few hours after the fact, prompting astronomers all over the world to point their telescopes towards the event. The brightness of this Type 1a supernova is steadily increasing and may be visible with binoculars in about seven to 10 days. Astronomers believe it may become the brightest Type 1a supernova of the last 30 years.

On August 24, 2011 an automatic telescope from the Palomar Observatory at Caltech captured the new supernova in the Pinwheel spiral galaxy (M101). The computers analyzing the data from the telescope automatically identified the event as a supernova and disseminated the information to a worldwide network of observatories in order to track it better. The supernova was named PTF 11kly. Through light analysis, Peter Nugent and his team at the University of California at Berkeley were able to determine that this is, in fact, a supernova Type 1a.

Visit EarthSky Tonight – what to see in the night sky – updated daily!

This type of explosion happens when a massive star, much larger than our sun, has consumed all of its hydrogen fuel. Its internal nuclear furnace collapses because it can no longer contain the star’s gravity, triggering an explosion that is briefly brighter than the star’s entire galaxy.

The fact that the explosion was captured a few hours after it occurred is very important for astronomers, not only because they’ll be able to watch all its phases, but also because scientists will be able to see fragments of the broken star and find out what kind of star it was before the explosion occurred. Andrew Howelly from the University of California at Santa Barbara puts it this way: “We’re finding new clues to solve the supernova mysteries that have baffled us for the past 70 years. Even though I’ve studied thousands of supernovas, I’ve never seen something like this.” 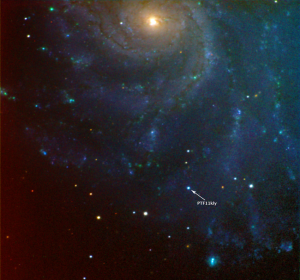 Luis Castilla, Lead Producer and On-Air Host (Spanish), came from Mexico City in fall 2010 especially to work with EarthSky en Español. He oversees the production of our Spanish videos, leads our Spanish-speaking communities on Facebook and Twitter, provides a voice for our Spanish radio shows and interviews scientists in Spanish. Luis has had extensive experience in the broadcast world, having produced for a wide range of clients, including the Office of the President of Mexico. His experience in post-production includes commercials and audience analysis for major networks like Televisa and Grupo Siete. Luis taught Radio and Television courses at Universidad del Nuevo Mundo and voiced radio and television ads for major companies such as Ford and SEGOB. Having lived in the U.S. and Canada for extended periods of time, Luis is empowered with a full bilingual and bicultural experience that enables him to better understand the complex needs of the EarthSky en Español audience.