Posted by Eleanor Imster and Deborah Byrd in Space | July 3, 2016

In late June, as Juno crossed into Jupiter’s magnetic field, an instrument aboard the craft recorded the bow shock. Hear it here.

On July 4, 2016 – at 8:18 p.m. PDT (July 5 at 0318 UTC) – NASA’s solar-powered Juno spacecraft will begin moving into orbit around Jupiter. One of the mission goals is to understand Jupiter’s enormous magnetosphere, the magnetic environment surrounding the planet.

Juno crossed the boundary into Jupiter’s immense magnetic field on June 24, 2016. The craft’s Waves instrument recorded the encounter with the bow shock over the course of about two hours. Bow shock – analogous to a sonic boom on Earth – is where the supersonic solar wind is heated and slowed by Jupiter’s magnetosphere.

Wait for the bass drop. Hear the roar of #Jupiter from when I entered the planet’s magnetic field https://t.co/bLn0rKT2s1

The next day, June 25, 2016, the Waves instrument witnessed the crossing of the magnetopause. In the video above, trapped continuum radiation refers to waves trapped in a low-density cavity in Jupiter’s magnetosphere.

Planets’ magnetic environments don’t exist in isolation. They’re the result of a collision between a planet’s intrinsic magnetic field and the supersonic solar wind. NASA said :

As Juno orbits Jupiter in the coming months and years, we’ll learn more!

Read about Juno and Jupiter’s magnetosphere from NASA 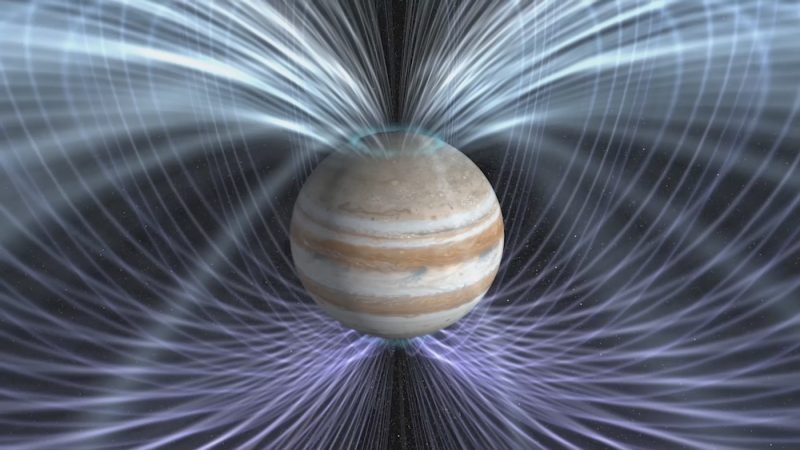 Scientists will use twin magnetometers aboard the Juno spacecraft to learn how Jupiter’s magnetic field is generated. Image via NASA Goddard Space Flight Center

Bottom line: NASA video discusses how the Juno mission, arriving at Jupiter on July 4, 2016, will explore the planet’s massive magnetosphere.