After a 5-year voyage, Juno performed a successful braking maneuver on July 4. First spacecraft to enter Jupiter orbit since Galileo in the 1990s.

UPDATE JULY 5, 2016 AT 4:45 A.M. (0945 UTC): NASA’s Juno spacecraft successfully went into orbit around Jupiter last night. A sequence of tones transmitted from the spacecraft, confirming the braking maneuver had gone as planned and that the spacecraft had slowed enough to enter Jupiter orbit, was accompanied by wild cheering from the team at NASA’s Jet Propulsion Laboratory in Pasadena, California. Juno launched from Earth in August, 2011.

Soon after the burn was completed, Juno turned so that the sun’s rays could once again reach the 18,698 individual solar cells that give Juno its energy. Rick Nybakken, Juno project manager from JPL, said:

The spacecraft worked perfectly, which is always nice when you’re driving a vehicle with 1.7 billion miles on the odometer. Jupiter orbit insertion was a big step and the most challenging remaining in our mission plan, but there are others that have to occur before we can give the science team members the mission they are looking for.

Over the next few months, Juno’s mission and science teams will perform final testing on the spacecraft’s subsystems, final calibration of science instruments and some science collection.

The official science collection phase begins in October, but scientists say they’ve figured out a way to collect data a lot earlier than that. Stay tuned! 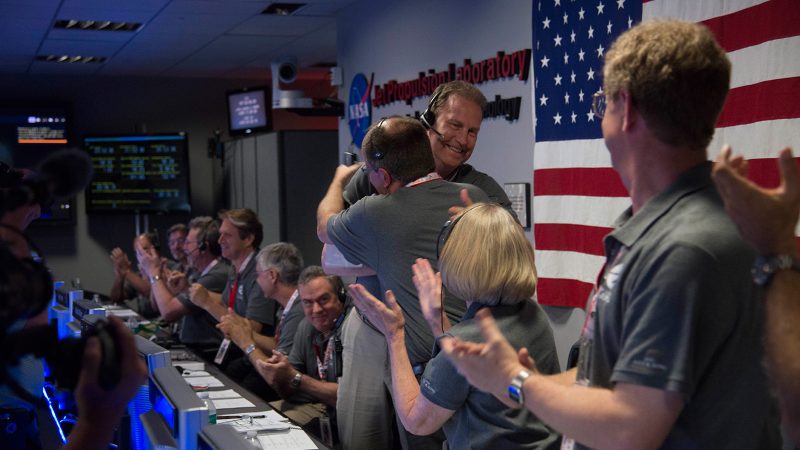 The Juno team at JPL celebrates, after receiving data indicating that the Juno mission entered orbit around Jupiter. Image via NASA/JPL-Caltech.

ORIGINAL ARTICLE BEGINS HERE. On Monday – July 4, 2016 – NASA’s Juno spacecraft will fire its main engine for 35 minutes, slowing the craft and moving it from its beeline through space into orbit around Jupiter. Launched from Cape Canaveral in 2011, after traveling through space for five years, the solar-powered Juno craft will begin the maneuver – called Jupiter Orbit Insertion – as Independence Day fireworks are streaming through U.S. skies on July 4 at 8:18 p.m. PDT (July 5 at 0318 UTC; translate to your time zone). Juno will become the first craft to enter Jupiter orbit since Galileo, which arrived in 1995 and spent eight years moving around the giant planet.

To follow along as Juno makes its journey into Jupiter orbit, watch NASA TV live coverage beginning July 4 at 7:30 p.m. PDT (July 5 at 0230 UTC; translate to your time zone).

For a mission countdown, images, facts about Jupiter and Juno and other resources, visit NASA’s Solar System Exploration website.

Juno crossed the boundary into Jupiter’s immense magnetic field on June 24, 2016. The craft’s Waves instrument recorded the encounter with the bow shock over the course of about two hours. Bow shock – analogous to a sonic boom on Earth – is where the supersonic solar wind is heated and slowed by Jupiter’s magnetosphere. Want to hear the boom? Check out the video below.

Wait for the bass drop. Hear the roar of #Jupiter from when I entered the planet’s magnetic field https://t.co/bLn0rKT2s1

Juno has 37 close approaches to Jupiter planned. At its closest, Juno will fly within 2,900 miles (4,667 km) of the cloud tops of Jupiter, closer than any spacecraft has been before. According to NASA scientists, getting this close to Jupiter comes with a price – one that will be paid each time Juno’s orbit carries it close to the planet’s cloud cover. Scott Bolton, Juno principal investigator, said:

The source of the potential trouble is found inside Jupiter itself. According to NASA:

Well below the planet’s cloud tops is a layer of hydrogen that is under such incredible pressure that it acts as an electrical conductor. Scientists believe that the combination of this metallic hydrogen along with Jupiter’s fast rotation – one day on Jupiter is only 10 hours long – generates a powerful magnetic field that surrounds the planet with electrons, protons and ions traveling at nearly the speed of light.

The endgame for any spacecraft that enters this doughnut-shaped field of high-energy particles is an encounter with the harshest radiation environment in the solar system.

Over the life of the mission, Juno will be exposed to the equivalent of over 100 million dental X-rays. But, we’re ready. We designed an orbit around Jupiter that minimizes exposure to Jupiter’s harsh radiation environment. This orbit allows us to survive long enough to obtain the tantalizing science data that we have traveled so far to get.

@OddSigma The radiation is mostly confined to the equator. So the polar orbit helps avoid most of the radiation belt. #askNASA

@BP_Hutch It is approximately a two year mission, and will purposefully end in 2018. #askNASA

Going to a party this #FourthofJuly? Take @NASA with you! Stream live as I get to #Jupiter. https://t.co/illSYqwGol pic.twitter.com/vyx3aq24cT

Bottom line: On July 4, 2016, NASA’s solar-powered Juno spacecraft will enter orbit around Jupiter. It’ll be the first craft to orbit Jupiter since Galileo. Links to online view of the orbit insertion, and more, here.