Astronomers say a newly discovered planet might have Goldilocks-like conditions – neither too hot nor too cold – for water and possibly life.

European astronomers announced a newly discovered planet 36 light-years away with an environment possibly as hot as a steam bath and potentially supportive of life. The researchers say the planet, called HD 85512 b, holds Goldilocks-like conditions – not too hot nor too cold – for liquid water on its surface and possibly life.

Astronomers call the newly found planet a “super-Earth” because it has about 3.6 times the mass of our Earth. This potentially Earth-like world is one of 50 new planets found by astronomers using the High Accuracy Radial velocity Planet Searcher (HARPS). HARPS is a spectrograph instrument on the European Southern Observatory’s 3.6 meter telescope at the La Silla Observatory in Chile. 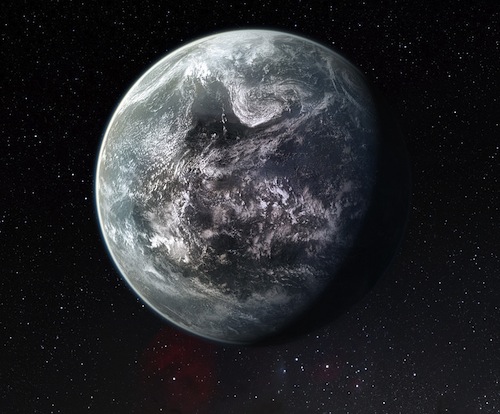 Artist’s conception of a newly discovered Earth-like planet with the potential for water and life. Image Credit: ESO

We were asking not many years ago whether or not there were planets out there like our Earth. And right now, we’re making these first steps. We’re finding the first targets that could be another Earth. We don’t know yet. But we’re already finding those targets. Give it hopefully ten or fifteen years more, and we’ll be able to get space telescopes or ground-based telescopes to actually get light from these planets. So our generation is making these first steps finding these potentially other rocky worlds out there, close to our own sun, that we can point our telescopes at. And hopefully we’ll get a pleasant surprise.

Telescopic close-up of the sky around the star HD 85512.

The planet was discovered by looking at stars and checking with incredible precision whether or not they move towards us or away from us. This is called radial velocity. That movement appears as a minute shift in the frequency of starlight to blue when the star moves towards us, or red if away. The star’s movement comes from the gravitational pull of planets that orbit it. The smaller the movement, the smaller the planet. Astronomers can determine the mass of the planet using this technique. But in order to get the diameter of an alien world, astronomers need to see it transit in front of its parent star. And to see whether there are signs of life such as oxygen in the planet’s atmosphere, starlight that travels through its atmosphere must be collected.

Kaltenegger used computer modeling and knowledge about the mass and orbital distance of HD 85512 b from its star to determine that it could theoretically hold water. She explained:

What we actually did was, we took a model where we assume the best-case scenario. We assume that the planet is rocky and it has water. We basically put a bigger Earth there, 3.6 times the Earth’s mass, with a composition like our own atmosphere with water on its surface. And we have a look whether or not the planet would lose its water in no time or whether it would maintain it. We think it needs to maintain its water to be a habitat as well. Just think about Venus. Venus doesn’t have water on its surface. A lot of CO2 in its atmosphere, extremely hot. Not a habitat. You want to avoid that.

And the interesting thing about this planet is that it’s very close to the equivalent distance that Venus is from our own sun. But it’s a bit further out. So it’s between Venus and the Earth. It only gets about three percent less flux – stellar heat or stellar energy – than Venus does in our own system. But we think that if it has more than 50 to 60 percent of cloud coverage – in comparison the Earth has about 50 to 60 – then it could actually maintain liquid water on its surface, assuming it had it in the first place. So this is a very, very exciting planet.

Bottom Line: European astronomers discovered a planet 36 light-years away, possibly as hot as a steam bath and suitable to support life. The researchers say the planet, called HD 85512 b, holds Goldilocks-like conditions, not too hot nor too cold for liquid water on its surface – and therefore life. They see it as a hopeful sign that there might be life outside our solar system.

Alan Boss says universe could be crowded with Earth-like planets