A gigantic storm raging on the surface of this brown dwarf might be like Jupiter’s red spot – but even grander in scale.

Astronomers meeting in Jackson Hole, Wyoming today (September 12, 2011) will be talking about a nearby brown dwarf whose observed brightness changes might indicate a storm grander than storms yet seen on any planet. This storm might be similar to Jupiter’s red spot – but grander in scale. Led by University of Toronto astronomers, the team says this finding could shed new light on weather phenomena of extra-solar planets, because old brown dwarfs and giant planets are thought to have similar atmospheres.

The astronomers are presenting a paper (PDF) about this finding at the Extreme Solar Systems II conference, which started today in Jackson Hole. 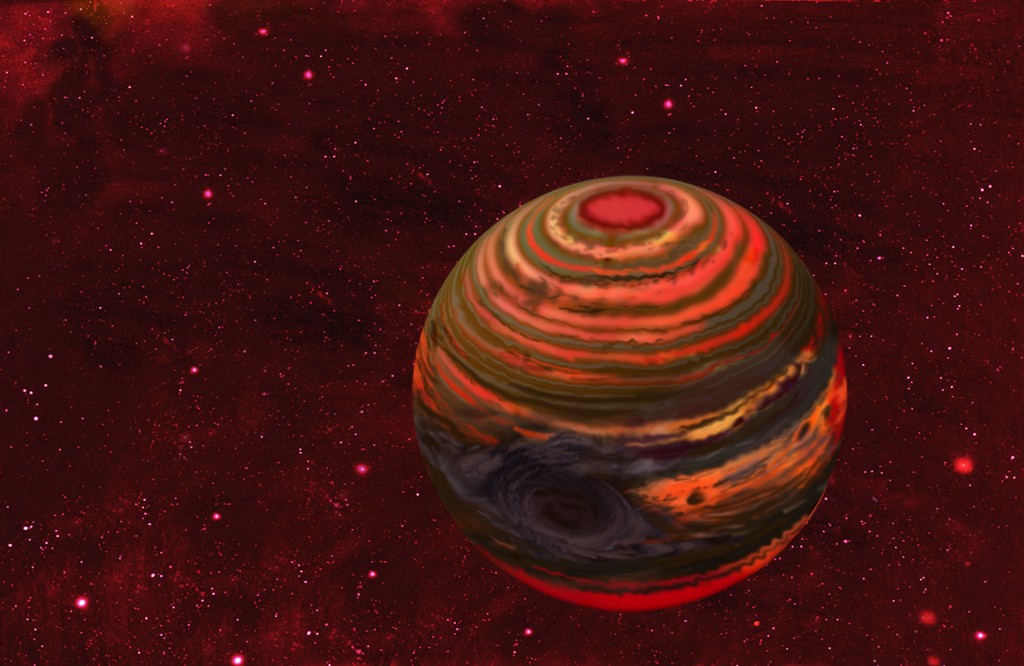 Astronomers have observed extreme brightness changes on a nearby brown dwarf that may indicate a storm grander than any yet seen on a planet. This finding could shed new light on the atmospheres and weather on extra-solar planets. Image Credit: Art by Jon Lomberg

The astronomers made this discovery as part of a large survey of nearby brown dwarfs – objects with more mass than giant planets, but not enough mass to “burn” hydrogen in their interiors and so be categorized as true stars. The scientists used an infrared camera on the 2.5 m telescope at Las Campanas Observatory in Chile to capture repeated images of a brown dwarf dubbed 2MASS J21392676+0220226 (or 2MASS 2139, for short) over several hours. In that short time span, they recorded the largest variations in brightness ever seen on a cool brown dwarf.

We found that our target’s brightness changed by a whopping 30 percent in just under eight hours. The best explanation is that brighter and darker patches of its atmosphere are coming into our view as the brown dwarf spins on its axis.

Co-author Ray Jayawardhana, of the University of Toronto and author of the recent book Strange New Worlds: The Search for Alien Planets and Life beyond Our Solar System, said:

We might be looking at a gigantic storm raging on this brown dwarf, perhaps a grander version of the Great Red Spot on Jupiter in our own solar system, or we may be seeing the hotter, deeper layers of its atmosphere through big holes in the cloud deck.

According to theoretical models, clouds form in brown dwarf and giant planet atmospheres when tiny dust grains made of silicates and metals condense. The depth and profile of the brightness variations of 2MASS 2139 changed over weeks and months, suggesting that cloud patterns in its atmosphere are evolving with time.

Bottom line: Jacqueline Radigan, University of Toronto, and her team of astronomers have discovered extreme brightness changes on a nearby brown dwarf – 2MASS 2139. This may indicate a storm grander than storms yet seen on any planet. The astronomers are presenting their findings the week of September 12, 2011, at the Extreme Solar Systems II conference in Jackson Hole, Wyoming.

Stars are hot, right? Not this star.