Stars are hot, right? Not this star.

Astronomers have found the coolest star – temperature-wise. This star is cooler than the human body.

Astronomers have found the coolest star – temperature-wise, that is – although some would argue it should not be called a star. It is approximately 40 light-years away, in the direction of the constellation Lyra the Harp.

Using data from the WISE satellite, scientists located a Y-class brown dwarf star with a temperature of 80 degrees Fahrenheit (25 degrees Celsius). In other words, although we think of stars as blazing hot, this star is cooler than the human body. Or as Geekologie said: 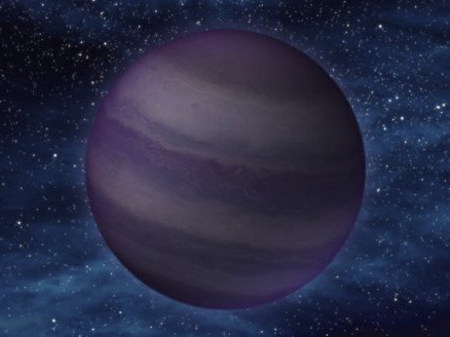 Does this object look too dark to be a star? That’s because it’s so cool. Artist’s concept of WISE 1828+2650. Image Credit: NASA/JPL-Caltech

The coolest star, called WISE 1828+2650, was one of six Y-dwarfs recently found by astronomers in their analysis of data collected by NASA’s Wide-field Infrared Survey Explorer (WISE) satellite. Y-dwarfs are the coolest category of brown dwarf stars.

Davy Kirkpatrick is a WISE science team member at the Infrared Processing and Analysis Center at the California Institute of Technology in Pasadena, California. He said in a press release:

The brown dwarfs we were turning up before this discovery were more like the temperature of your oven. With the discovery of Y dwarfs, we’ve moved out of the kitchen and into the cooler parts of the house.

Brown dwarfs have been called “failed” stars. They lack the mass to start the nuclear reactions that make a star shine. So far, WISE scientists have found 100 brown dwarf stars and expect to find many more. Scientists hope to develop a deeper understanding of how stars form through the study of brown dwarfs. 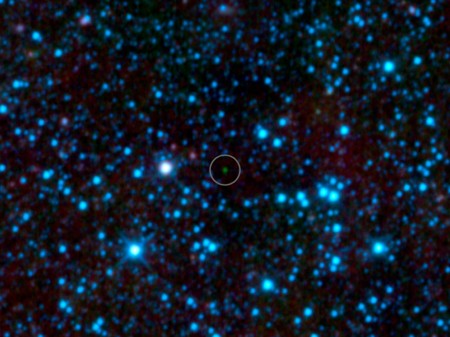 The coolest star doesn’t stand out in a crowd. Image Credit: NASA/JPL-Caltech/UCLA

Finding brown dwarfs near our sun is like discovering there’s a hidden house on your block that you didn’t know about. It’s thrilling to me to know we’ve got neighbors out there yet to be discovered. With WISE, we may even find a brown dwarf closer to us than our closest known star. 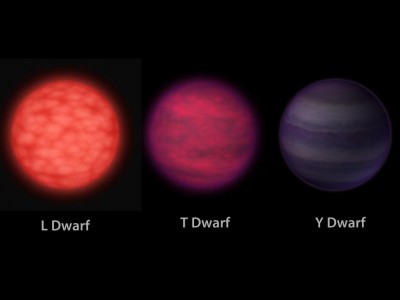 The WISE satellite, launched December 2009, imaged the sky through February 2011, using an infrared telescope. Some of the mission’s objectives were to find the coolest and nearest stars and to look for near-Earth asteroids. By using infrared technology, WISE has been able to detect objects with temperature ranges between roughly minus 330 degrees Fahrenheit (minus 200 degrees Celsius) to 1300 degrees Fahrenheit (700 degrees Celsius). Infrared also allows detection of objects through dust clouds. In July 2011 astronomers using WISE data announced the discovery of Earth’s own Trojan asteroid.

For now WISE 1828+2650 is the coolest star known. Scientists are sure to announce more discoveries from WISE data, possibly even the discovery of a cooler or nearer star.