The star is a white dwarf, a cool, dead, dense star like our sun some 6 billion years from now. The planet fragment – made of heavy metals – survived a system-wide cataclysm that followed the star’s death. 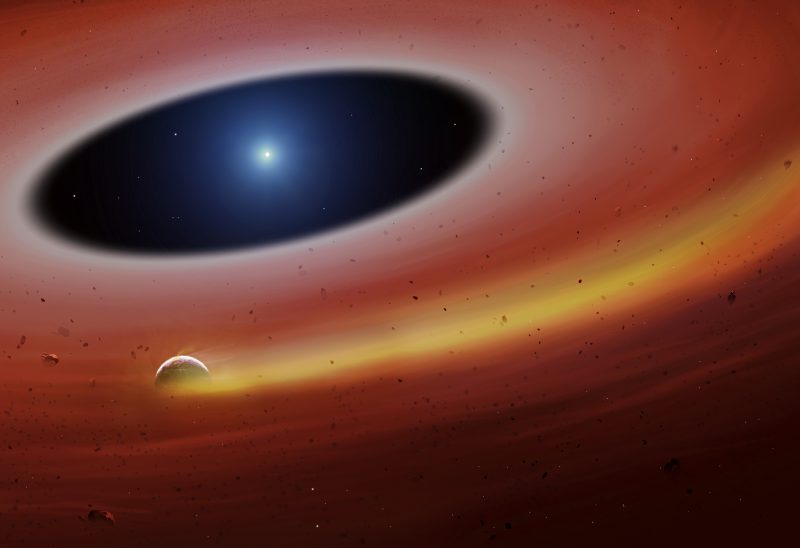 Artist’s concept of planetary fragment orbiting the star SDSS J122859.93+104032.9, leaving a tail of gas in its wake. Image via University of Warwick/Mark Garlick.

Astronomers from University of Warwick in Coventry, England, said on April 4, 2019, that they’ve detected
a relatively large fragment from a former planet, orbiting in a disk of debris encircling a dead star. The star is a white dwarf, and it’s located 410 light-years away. The white dwarf should have destroyed its solar system in a system-wide cataclysm that followed its death. But the newly discovered planet fragment is thought to be rich in heavy metals – iron and nickel – which helped it survive destruction. The astronomers said the fragment is orbiting the white dwarf:

… closer than we would expect to find anything still alive.

They also said the planet fragment has a “comet-like tail” of gas, creating a ring within the debris disk. And they said this system offers us a hint as to the future of our own solar system, 6 billion years from now. The discovery was reported in the peer-reviewed journal Science on April 4. These astronomers’ statement explained:

The iron and nickel rich planetesimal survived a system-wide cataclysm that followed the death of its host star, SDSS J122859.93+104032.9. Believed to have once been part of a larger planet, its survival is all the more astonishing as it orbits closer to its star than previously thought possible, going around it once every two hours.

This is the second time astronomers have found a solid planetesimal in a tight orbit around a white dwarf. It’s the first time that scientists have used spectroscopy for this sort of discovery. These astronomers used the Gran Telescopio Canarias in La Palma in Spain’s Canary Island. They examined:

… the debris disk orbiting the white dwarf, formed by the disruption of rocky bodies composed of elements such as iron, magnesium, silicon, and oxygen – the four key building blocks of the Earth and most rocky bodies. Within that disk they discovered a ring of gas streaming from a solid body, like a comet’s tail. This gas could either be generated by the body itself or by evaporating dust as it collides with small debris within the disk.

The astronomers estimate that this body has to be at least a kilometer (.6 miles) in size, but could be as large as a few hundred kilometers in diameter, comparable to the largest asteroids known in our solar system. 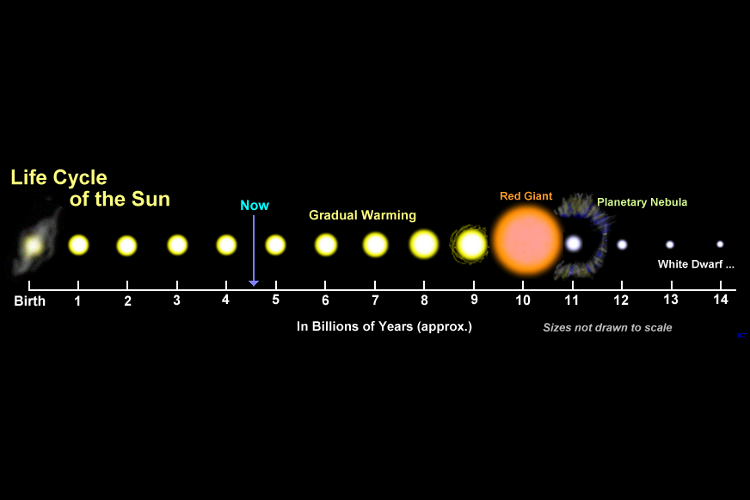 Life cycle of our sun, via ScienceLearningHub in New Zealand.

According to astronomers’ theories, our sun will become a white dwarf when it has burnt all the thermonuclear fuel (especially the light elements hydrogen and helium) that now enables it to shine. When this happens, our sun is expected to shed its outer layers, these astronomers said, leaving behind a white dwarf:

… a dense core which slowly cools over time. This particular star has shrunk so dramatically that the planetesimal orbits within its sun’s original radius. Evidence suggests that it was once part of a larger body further out in its solar system and is likely to have been a planet torn apart as the star began its cooling process.

Lead author Christopher Manser, a Research Fellow in the Department of Physics, said in the statement:

The star would have originally been about two solar masses, but now the white dwarf is only 70 percent of the mass of our sun. It is also very small – roughly the size of the Earth – and this makes the star, and in general all white dwarfs, extremely dense.

The white dwarf’s gravity is so strong — about 100,000 times that of the Earth’s — that a typical asteroid will be ripped apart by gravitational forces if it passes too close to the white dwarf.

The planetesimal we have discovered is deep into the gravitational well of the white dwarf, much closer to it than we would expect to find anything still alive. That is only possible because it must be very dense and/or very likely to have internal strength that holds it together, so we propose that it is composed largely of iron and nickel.

If it was pure iron it could survive where it lives now, but equally it could be a body that is rich in iron but with internal strength to hold it together, which is consistent with the planetesimal being a fairly massive fragment of a planet core. If correct, the original body was at least hundreds of kilometers in diameter because it is only at that point planets begin to differentiate – like oil on water – and have heavier elements sink to form a metallic core.

The discovery offers a glimpse into the future of our own solar system. Manser said:

As stars age they grow into red giants, which ‘clean out’ much of the inner part of their planetary system. In our solar system, the Sun will expand up to where the Earth currently orbits, and will wipe out Earth, Mercury, and Venus. Mars and beyond will survive and will move further out.

The general consensus is that 5 to 6 billion years from now, our solar system will be a white dwarf in place of the sun, orbited by Mars, Jupiter, Saturn, the outer planets, as well as asteroids and comets. Gravitational interactions are likely to happen in such remnants of planetary systems, meaning the bigger planets can easily nudge the smaller bodies onto an orbit that takes them close to the white dwarf, where they get shredded by its enormous gravity. 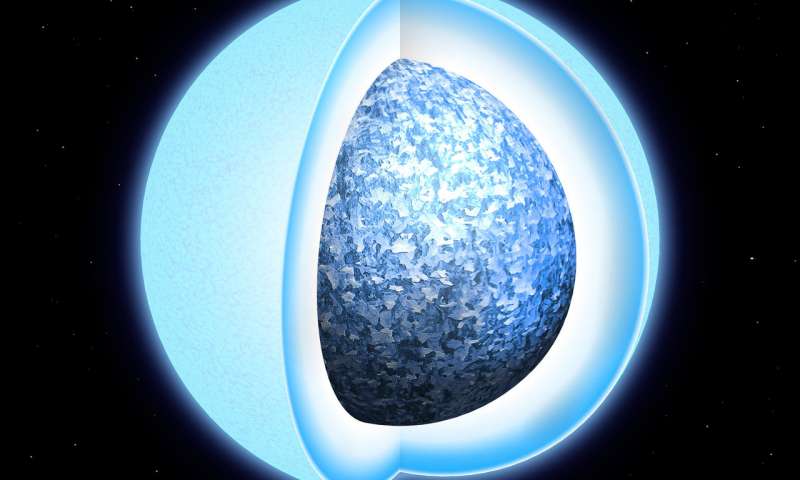 Bottom line: Astronomers have identified a heavy metal planet fragment orbiting the white dwarf star SDSS J122859.93+104032.9. The system may give us a glimpse of what our solar system will become 6 billion years from now.

Source: A Planetesimal Orbiting Within the Debris Disc Around a White Dwarf Star