Thousands of stars, including our sun, destined to turn into crystals

Posted by Eleanor Imster and Deborah Byrd in Space | January 12, 2019

Astronomers now have the 1st direct evidence that white dwarf stars form crystal cores. Our sun is destined to become a crystal white dwarf in about 10 billion years. 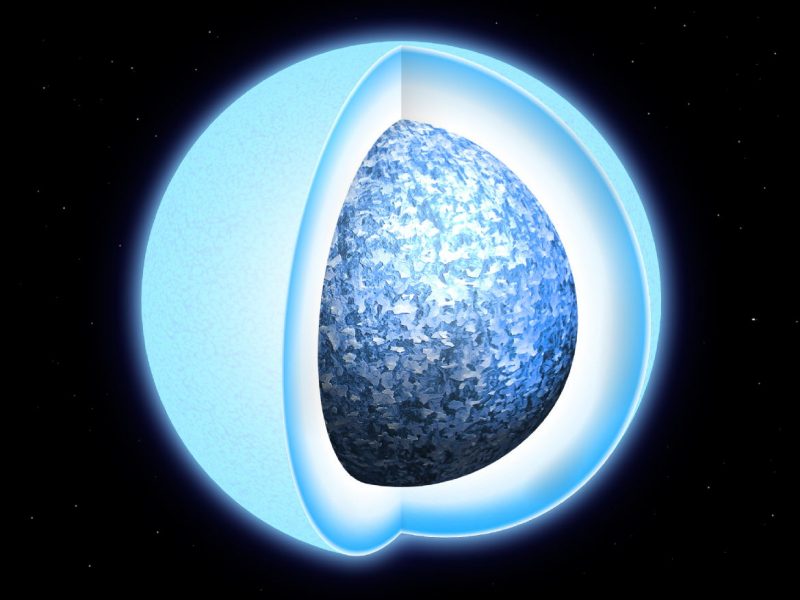 Artist’s concept of an evolved star – called white a dwarf – in the process of solidifying into a crystal. Image via University of Warwick/Mark Garlick.

Astronomers at the University of Warwick said this week they now have the first direct evidence that white dwarf stars – stars in an advanced stage of their evolution – ultimately solidify into crystals. That idea has been around for decades, but now new observations back it up. The astronomers who conducted this study say our skies must be filled with these crystal white dwarfs. They also point out that – long after it has swollen up as a red giant and swallowed the Earth – our sun is destined to become a crystal white dwarf, too, billions of years from now.

The new study – led by Pier-Emmanuel Tremblay – was published January 9, 2019, in the peer-reviewed journal Nature.

Current models of our home galaxy, the Milky Way, suggest that our galaxy alone currently contains about 10 billion white dwarfs. They are the hot, dense remnants of long-dead stars, essentially stellar cores, left behind after a star has exhausted its fuel supply and blown its bulk of gas and dust into space.

These exotic objects mark the final stage of evolution for most stars in the universe, including our sun.

According to the new study, the oldest white dwarfs, nearly the age of the Milky Way galaxy itself, are likely to be almost fully crystal already.

The astronomers selected 15,000 white dwarf candidates within around 300 light-years of Earth from observations made by the European Space Agency’s Gaia satellite. They then analyzed Gaia’s data on the stars’ luminosities and colors. The analysis showed that white dwarfs have a core of solid oxygen and carbon. This is due, the astronomers say, to a phase transition during their lifecycle similar to water turning into ice but at much higher temperatures.

The work showed these white dwarfs are likely older than previously believed. The astronomers’ statement explained:

They identified a pile-up, an excess in the number of stars at specific colors and luminosities that do not correspond to any single mass or age. When compared to evolutionary models of stars, the pile-up strongly coincides to the phase in their development in which latent heat is predicted to be released in large amounts, resulting in a slowing down of their cooling process. It is estimated that in some cases these stars have slowed down their aging by as much as 2 billion years, or 15 percent of the age of our galaxy.

This is the first direct evidence that white dwarfs crystallize, or transition from liquid to solid. It was predicted 50 years ago that we should observe a pile-up in the number of white dwarfs at certain luminosities and colors due to crystallization and only now this has been observed.

All white dwarfs will crystallize at some point in their evolution, although more massive white dwarfs go through the process sooner. This means that billions of white dwarfs in our galaxy have already completed the process and are essentially crystal spheres in the sky.

The sun itself will become a crystal white dwarf in about 10 billion years.

Source: Core crystallization and pile-up in the cooling sequence of evolving white dwarfs