What are gamma ray bursts?

Only the most powerful explosions in the universe. 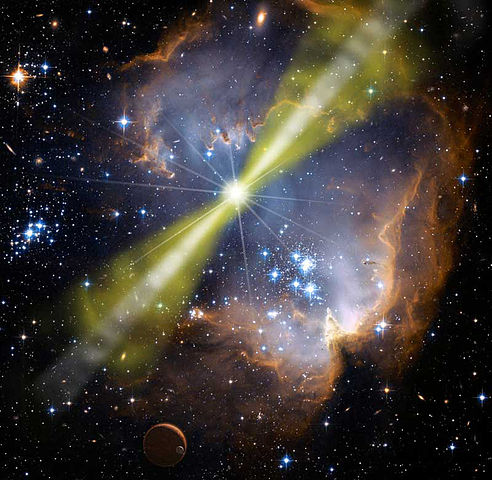 Artist’s concept of a gamma ray burst focusing the energy of the exploding star along two polar jets. We see these bursts when one of the jets is pointed towards Earth. Image via NASA/ Swift/ Mary Pat Hrybyk-Keith/ John Jones/ Wikipedia.

If your eyes could detect gamma rays, you would see brilliant bursts of light in the sky about once per day. The flashes would be so brilliant, they would momentarily outshine everything, including the sun. These gamma ray bursts (GRBs) are the most powerful singular events in the universe. They’re thought to be messages from the beginning of time when the most massive stars in existence violently collapsed.

GRBs were discovered by accident while looking for a very different kind of electromagnetic outburst. In the early 1970s, military satellites monitored our planet for violations of the Nuclear Test Ban Treaty. Rogue nuclear tests would show up as gamma ray flashes coming up from the ground. While flashes were detected, they did not originate on Earth!

Hundreds of bursts were recorded for decades but their nature remained a mystery. Because gamma rays are very difficult to focus, it was impossible to pinpoint their locations on the sky. Also, their ephemeral nature made them maddeningly tricky to investigate. By the time a telescope could be pointed in the direction of a flash, it was too late.

Some researchers speculated they might be engineered by advanced civilizations! 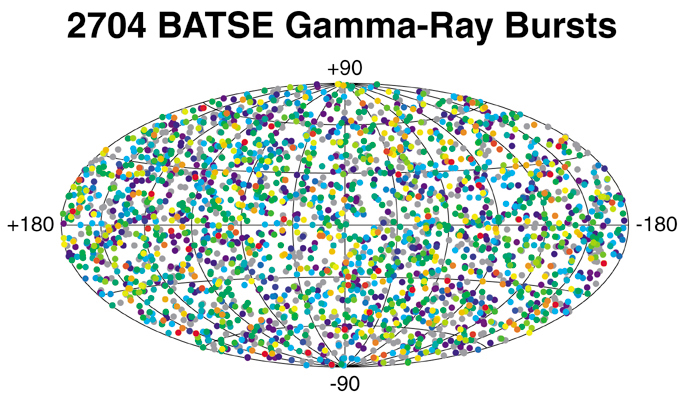 From 1991 to 2000, the Burst and Transient Source Experiment (BATSE) on board the Compton Gamma Ray Observatory detected over 2700 gamma ray bursts. This map shows the locations of all these on the sky. The fact that they are not confined to the plane of our galaxy tells astronomers that GRBs must be extragalactic in nature. The colors differentiate the brightness of the bursts. Credit: NASA

With the advent of more advanced telescopes, GRBs started to reveal more about themselves in the 1990s. They were definitely not local. GRBs in the Milky Way would have been seen mostly in the thin plane of our galaxy—the Compton X-Ray Observatory found that they came from all over the sky. Astronomers realized they must be extragalactic. Better telescopes which quickly pinpointed the precise location of a GRB led to the detection of faint afterglows all across the electromagnetic spectrum. In every case, the GRB came from the same direction as a very distant galaxy. These galaxies tended to be young, active stellar nurseries – the perfect place to build very massive stars.

The afterglow light revealed a lot more. By measuring how much the light had been redshifted by the expansion of the universe, astronomers could estimate their distances. And they were most definitely not local. The light from GRBs had been traveling for over half the age of the universe—they were among the most distant objects ever seen. But to be so far away and still be the brightest thing in the sky meant an unimaginable amount of energy had to be producing these flashes.

In fact, the amount of energy needed was equivalent to converting all the mass in the sun to pure radiation in a matter of seconds. Not even a supernova can do that. You would need something even more powerful—a hypernova!

An extraordinarly massive dying star can collapse its core into a black hole without triggering a supernova. With the sudden removal of the stellar core, the upper layers of the star come crashing down to fill in the cavity. If the star is spinning rapidly, the infalling material is whipped up into a swirling frenzy. A disk forms deep inside the star. In the ensuing vortex, superheated plasma is ensnared by highly twisted magnetic fields. Like an electromagnetic cannon, jets of gas blast through the poles of the star and erupt into space. The tunnel through the star forces the plasma streams into narrow cones, tightly focusing the energy of the collapse.

If one of these jets is pointed towards Earth, we see it as a brilliant flash of gamma ray light that fades after only a few seconds.

So it seems that most gamma ray bursts originate in a narrow beam of intense radiation released during a supernova or hypernova as a rapidly rotating, high-mass star collapses to form a neutron star, quark star, or black hole.

Meanwhile, subclass of gamma ray bursts (the “short” bursts) – events with a duration of less than about two seconds – appear to originate from a different process: the merger of binary neutron stars (or a neutron star and a black hole).

An artist’s rendition of a gamma ray burst focusing the energy of the exploding star along two polar jets. We see these bursts when one of the jets is pointed towards Earth. Credit: NASA/Swift/Mary Pat Hrybyk-Keith and John Jones (via Wikipedia)

GRBs hold many records in astronomy. The most distant object seen by astronomers is a burst whose light has been traveling for nearly the age of the universe. The stellar behemoth that produced it exploded shortly after the age of the first stars! Another GRB is the most energetic event known: 2.5 million times brighter than the brightest supernova. And supernovae, for the record, typically outshine entire galaxies. For 30 seconds in 2008, it was the most distant object visible to the naked eye – 7.5 billion light-years.

Luckily, all the GRBs have been at very safe distances from Earth. The closest, detected in 2003, is still over a billion light-years away. Were a GRB to go off in our own galaxy, though, it could be troubling for humanity. A nearby GRB pointed right at Earth could quite possibly trigger a mass extinction or even sterilize the planet.

Fortunately, GRBs are incredibly rare. Any given galaxy may only see one every few million years. Still, that’s enough time for Earth to have been blasted more than once in its long history. There is, in fact, evidence to suggest that one extinction event, 450 million years ago, may have been the result of a nearby GRB. 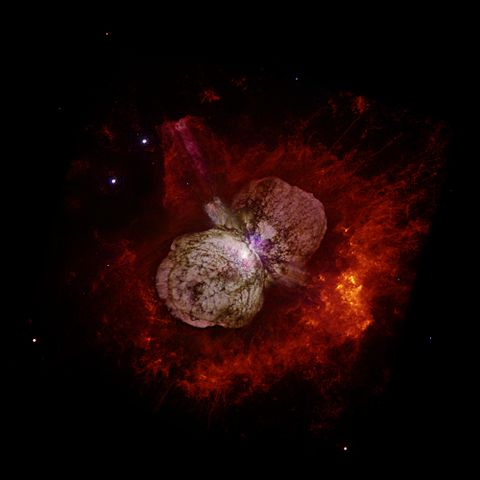 The star Eta Carinae, located 8000 light-years away in the constellation Carina, is an extraordinarily massive star. Containing the mass of 150 suns, it lives in a cocoon of dust and gas that is blown off the star by intense stellar winds. Because of its extreme mass, astronomers consider Eta Carinae a candidate for a nearby gamma ray burst in the not-too-distant future. Because the rotation axis does not point towards us, Earth would most likely be safe when this star explodes. Credit: Nathan Smith (University of California, Berkeley), and NASA (via Wikipedia)

Gamma ray bursts call to us from across the cosmos. They are echoes from the beginning of time, beacons from the violent implosion of stellar giants. And though the night sky is routinely bathed in their glow, we did not know they were there until very recently. Our eyes can only detect a tiny sliver of all the information racing through the cosmos. Without advanced detectors and telescopes, much of the universe would remain forever hidden. What else has been hiding from humanity through all our history? And what new secrets will we uncover tomorrow?