The work could provide insights into the workings of black-hole jets and help us understand the rate of the expansion of the universe. 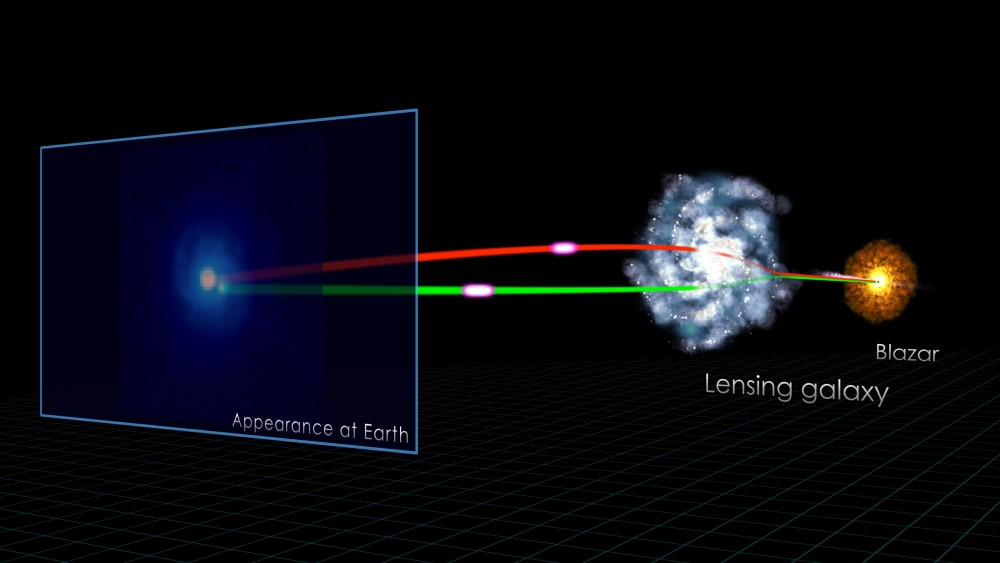 Components of the gravitational lens system B0218+357. Different sight lines to a background blazar result in two images that show outbursts at slightly different times. NASA’s Fermi made the first gamma-ray measurements of this delay in a lens system. Image via NASA’s Goddard Space Flight Center.

Gamma rays are a form of radiation billions of times more energetic than the light that’s visible to our eyes. Some of the most energetic and exotic objects in space are thought to produce gamma rays. Since gamma rays don’t penetrate Earth’s atmosphere, astronomers have launched spacecraft to study the universe as it looks in gamma rays. Now astronomers using NASA’s Fermi gamma ray observatory have made the first-ever gamma-ray measurements of a gravitational lens. They are reporting on their results this week at the 223rd meeting of the American Astronomical Society in Washington D.C.

In September 2012, Fermi’s Large Area Telescope (LAT) detected a series of bright gamma-ray flares from a source known as B0218+357, located 4.35 billion light-years from Earth in the direction of the constellation Triangulum. These powerful flares, in a known gravitational lens system, provided the key to making the lens measurement.

Astronomers classify B0218+357 as a blazar. It is a type of active galaxy noted for its intense emissions and unpredictable behavior. At the blazar’s heart is a billion-solar-mass black hole. The gamma rays are produced as matter spirals toward the hole, via jets of particles blasting outward, traveling near the speed of light in opposite directions.

It so happens that there is a face-on spiral galaxy between us and the blazar B0218+357. The spiral galaxy creates the gravitational lens effect, bending radiation from the blazar into different paths. As a result, astronomers see the background blazar as dual images. 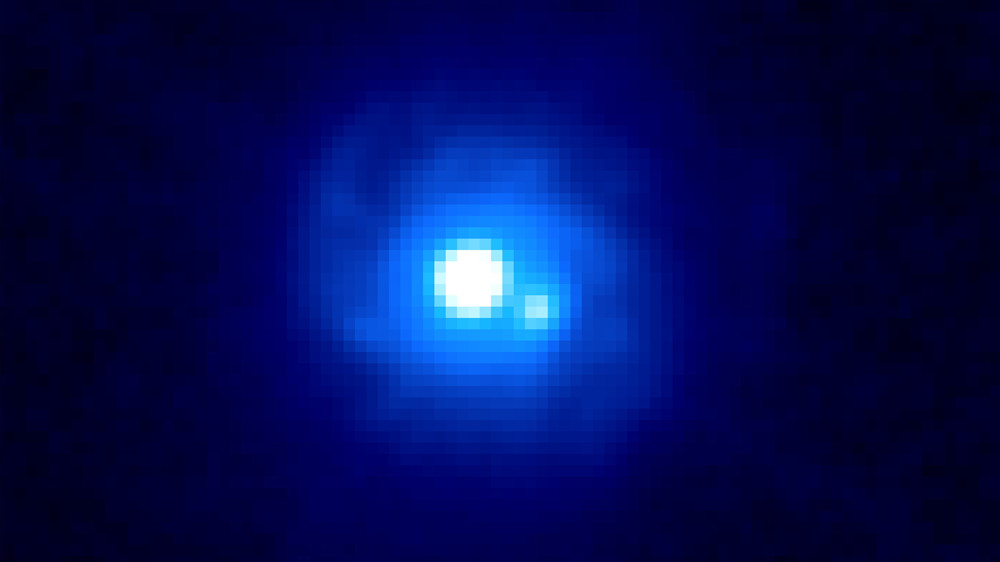 This Hubble image looks like two bright sources. But each bright dot is an image of a single background blazar, called B0218+357. In this image, you can also see faint spiral arms belonging to the intervening spiral galaxy, which is creating the lens effect. B0218+357 boasts the smallest separation of lensed images currently known. Image via NASA/ESA and the Hubble Legacy Archive. 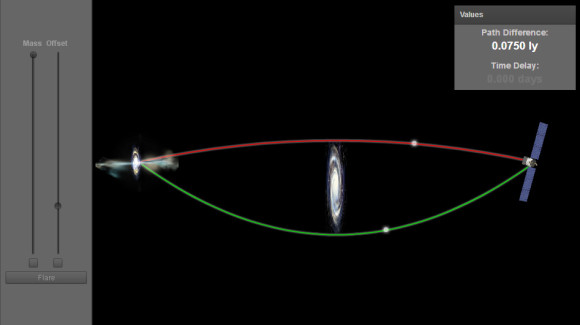 This image illustrates an intervening galaxy can act as a lens, to create a pair of images from a single object. Image via NASA’s Goddard Space Flight Center.

One light path is slightly longer than the other, so when we detect flares in one image we can try to catch them days later when they replay in the other image.

Over the course of a day, one of these flares can brighten the blazar by 10 times in gamma rays but only 10 percent in visible light and radio, which tells us that the region emitting gamma rays is very small compared to those emitting at lower energies.

The scientists say that comparing radio and gamma-ray observations of additional lens systems could help provide new insights into the workings of powerful black-hole jets like those in B0218+357.

The work may also establish new constraints on important cosmological quantities like the Hubble constant, which describes the rate of the expansion of the universe.

Bottom line: Astronomers using the Fermi gamma ray telescope have made the first study of a gravitational lens in gamma rays. They studied a blazar called B0218+357. The gamma rays from this object are thought to be produced when matter spirals toward a billion-solar-mass black hole, creating powerful jets of matter from the hole, moving in opposite directions. The lens effect is created by a spiral galaxy between us and B0218+357. Astronomers say this work should help provide new insights into black hole jets.

Read more about the study at NASA.gov

Read more from this week’s AAS meeting in Washington D.C.:

Images of a supernova’s dust factory