Astronomers have pinned down masses and orbits of three stars in a unique system. Next, they’ll use the system to study details in Einstein’s theory of General Relativity. 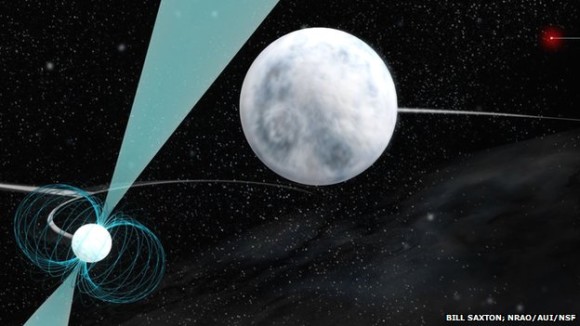 PSR?J0337+1715 is a millisecond pulsar, the first to be found in a triple system with two other stars. In this artist’s illustration, you see the pulsar (left) orbited by a hot white dwarf star (center), both of which are orbited by a cooler, distant white dwarf (right).

Astronomers are excited about a millisecond pulsar at the heart of a triple star system. It’s the first time they’ve found a triple system containing a pulsar, and the discovery team says it will use the pulsar’s clock-like properties to help unlock the secrets of gravity. These astronomers are presenting details of this unique star system today (January 6, 2014) at the 223rd meeting of the American Astronomical Society in Washington D.C.

The millisecond pulsar, PSR J0337+1715, spins nearly 366 times per second. Like a lighthouse, it emits beams of radio waves with each spin. One of the other two stars in the system is a white dwarf star in a 1.6-day orbit. The other star is also a white dwarf in a much-larger 327-day orbit. The entire system – 4,200 light-years from Earth – is packed into a space smaller than Earth’s orbit of our sun.

Astronomers speak of these systems as clocks because they spin with such clocklike regularity. Because it’s in a triple system, this millisecond pulsar will be used by astronomers for powerful studies of gravity. According to Scott Ransom of the National Radio Astronomy Observatory (NRAO), first author on a paper published in Nature yesterday (January 5, 2014):

This triple star system gives us the best-ever cosmic laboratory for learning how such three-body systems work, and potentially for detecting problems with General Relativity, which some physicists expect to see under such extreme conditions.

In particular, these astronomers want to study what is called the Strong Equivalence Principle of Einstein’s General Relativity theory. 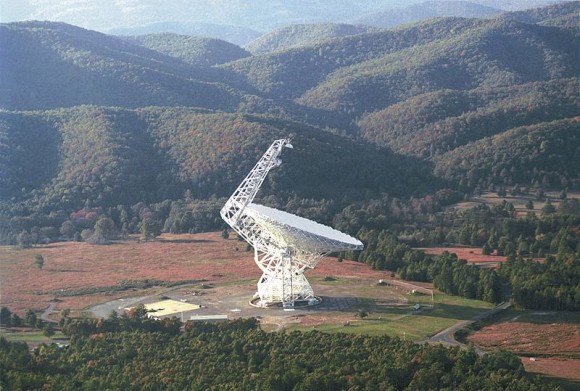 This is the Green Bank Telescope, one of several telescopes used to study the millisecond pulsar system. This telescope is about 100 yards wide and 485 feet tall, nearly as tall as the nearby mountains. It’s in a valley of the Allegheny mountains to shield the observations from radio interference. Image via Wikimedia Commons.

To start using the pulsar as a gravity probe, the astronomers had to record as many of its pulses as possible. They conducted what they called a “monumental” observing campaign with the Green Bank Telescope in West Virginia, the Arecibo radio telescope in Puerto Rico, and ASTRON’s Westerbork Synthesis Radio Telescope in the Netherlands. The ASTRON observations were led by astronomer Jason Hessels, who said

For a time we were observing this pulsar every single day, just so we could make sense of the complicated way in which it was moving around its two companion stars.

By measuring how the “tick of the pulsar clock” varied with time, they were able to determine the orbital geometry and the masses of the three stars.

Moving forward, these astronomers said in a press release:

… the system gives the scientists the best opportunity yet to discover a violation of a concept called the Strong Equivalence Principle. This principle is an important aspect of the theory of General Relativity, and states that the effect of gravity on a body does not depend on the nature or internal structure of that body.

Two famous illustrations of the equivalence principle are Galileo’s reputed dropping of two balls of different weights from the Leaning Tower of Pisa (possibly an apocryphal story) and Apollo 15 Commander Dave Scott’s dropping of a hammer and a falcon feather while standing on the airless surface of the moon in 1971. Lunar laser ranging measurements, using mirrors left on the moon by the Apollo astronauts, currently provide the strongest constraints on the validity of the equivalence principle. Here the experimental masses are the stars themselves, and their different masses and gravitational binding energies will serve to check whether they all fall towards each other according to the Strong Equivalence Principle, or not.

Bottom line: Astronomers are excited about a triple star system containing a millesecond pulsar and two white dwarfs. A long observing campaign enabled them to pin down the masses and orbits of the three stars. Now they intend to use the system to study the strong equivalence principle of Einstein’s General Relativity theory. They are presenting their results this week at the 223rd meeting of the American Astronomical Society in Washington D.C.