A new study focuses on the axial tilt of Earthlike exoplanets in binary or double star systems. It boosts hope for complex life elsewhere … although not, these astronomers say, within the star system closest to our sun. 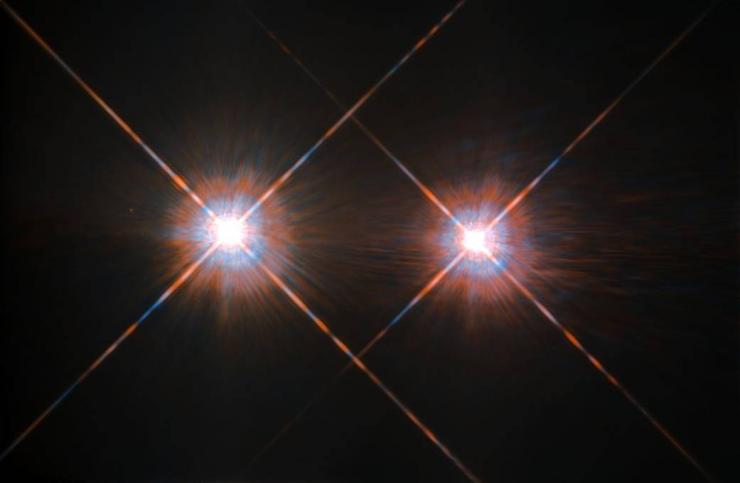 Alpha Centauri A and Alpha Centauri B, the 2 stars in the Alpha Centauri system, just 4.2 light-years away. This system is our nearest neighbor among the stars. An additional faint red dwarf star, Alpha Centauri C, or Proxima Centauri, is also nearby. Many have hoped to find an exoplanet – perhaps capable of harboring advanced life – in this system. But a new study lowers those expectations while raising them for the rest of the universe. Image via NASA/ESA Hubble Space Telescope/Georgia Tech.

Are we alone, or are there other intelligent civilizations in our Milky Way galaxy? In recent years, astronomers have discovered thousands of exoplanets, or worlds orbiting distant suns, some of which are potentially habitable. The growing consensus seems to be that we probably aren’t all by ourselves. Now a new study – announced by astronomers at the Georgia Institute of Technology (aka Georgia Tech) on November 20, 2019 – focuses on the axial tilt of Earthlike exoplanets in binary or double star systems. It also boosts hope for complex life elsewhere … although not, these astronomers say, within the star system closest to our sun.

The new peer-reviewed study was published in The Astrophysical Journal on November 19.

The researchers found that if a theoretical twin of Earth were placed into a binary star system – where two stars orbit each other – up to 87% of them should tilt on their axes in a way similar to Earth’s. What’s more, the tilt should be as stable as Earth’s: not perfectly stable, but not wildly unstable, either. This result is significant, since Earth’s relatively steady tilt on its axis helps our world maintain a stable climate, needed for complex life to evolve.

Astronomer Gongjie Li at Georgia Tech said in a statement:

Multiple-star systems are common, and about 50% of stars have binary companion stars. So, this study can be applied to a large number of solar systems.

Do the results mean that all exoEarths in double star systems have steady and stable axial tilts, along with a greater potential for complex life? Unfortunately, no. We need only look as far as the next-nearest star system to find a counter-example. 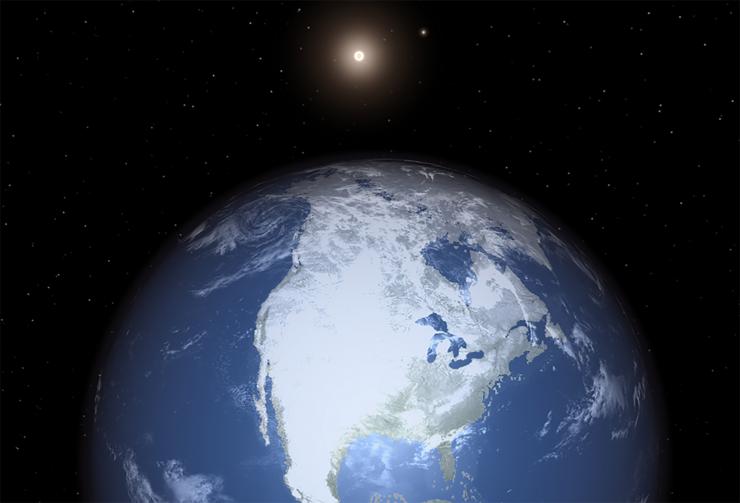 Artist’s illustration of an exoEarth modeled into the Alpha Centauri star system. The planet is hypothetically in the habitable zone of Alpha Centauri B, but is icy and not very hospitable for complex life. Image via Georgia Tech/Billy Quarles using Universe Sandbox.

That is, the researchers modeled an example of an Earthlike world within the habitable zones of the two primary stars in the Alpha Centauri system, only 4.2 light-years away. Their statement explained:

Alpha Centauri A actually didn’t look bad, but the outlook for mild axis dynamics on an exo-Earth modeled around star B was wretched. This may douse some hopes because Alpha Centauri AB is 4 light-years away, and a mission named Starshot with big-name backers plans to launch a space probe to examine the system, including for signs of advanced life.

So far, no actual exoplanets have yet been detected around either Alpha Centauri A or B. On the other hand, a planet is thought to orbit Proxima Centauri, a red dwarf star and technically our sun’s nearest neighbor (although no one knows for sure if Proxima is gravitationally bound to the A-B stars). This planet – called Proxima b – isn’t thought to be habitable, though. According to the new study’s principal investigator Billy Quarles, also of Georgia Tech:

We simulated what it would be like around other binaries with multiple variations of the stars’ masses, orbital qualities, and so on. The overall message was positive, but not for our nearest neighbor. 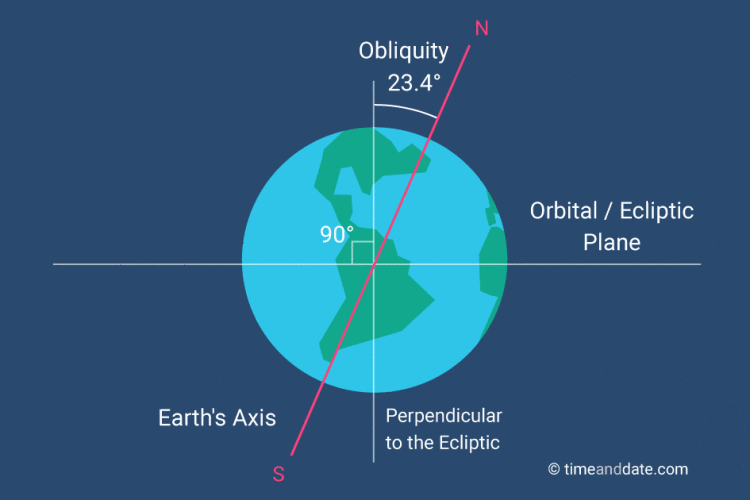 Earth’s axial tilt varies between 22.1 and 24.5 degrees every 41,000 years. This is mild enough for the planet to maintain a stable enough climate for complex life to evolve. Image via timeanddate.com.

A world’s axial tilt is important to the question of whether it can produce and sustain complex life. That’s because, for example, Earth’s axial tilt has a huge effect on our planet’s climate.

Earth’s tilt doesn’t vary much – only between 22.1 and 24.5 degrees every 41,000 years – and that fact has helped the planet maintain a stable climate over hundreds of millions of years, these astronomers say. In turn, the stable climate has allowed evolution to proceed and produce more complex lifeforms.

Plus Earth has a stable orbit around the sun, another factor in how well our planet can maintain a climate stable enough for complex life.

If a planet has large variations in its axial tilt – as our neighboring planet Mars does for example – it’s harder for the planet’s climate to stay stable. Mars’ axis is much more variable than Earth’s, precessing between 10 degrees and 60 degrees every 2 million years. According to Quarles:

If we didn’t have the moon, Earth’s tilt could vary by about 60 degrees. We’d look maybe like Mars, and the precession of its axis appears to have contributed to a loss of atmosphere.

On Mars, this has significant effects; at 10 degrees tilt, the atmosphere condenses at the poles, creating caps that lock up a lot of the carbon dioxide atmosphere in ice. At 60 degrees, the planet could actually develop an ice belt around its equator. There is a lot of ice underground on Mars today, even near the equator, but not on the surface of the planet except at the poles.

The researchers also found that – in a double star system – for example, for Alpha Centauri B, an Earth-like planet would actually have a more stable climate without a moon. According to Quarles:

But even without a moon, a planet orbiting Alpha Centauri B would have a difficult time maintaining a stable climate. Quarles said:

The biggest effect you would see is differences in the climate cycles related to how elongated the orbit is. Instead of having ice ages every 100,000 years like on Earth, they may come every 1 million years, be worse, and last much longer. 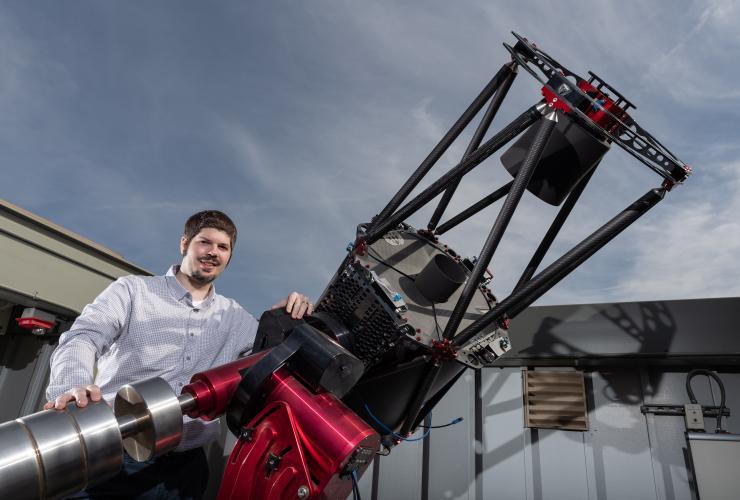 But, Quarles noted, there’s also a sweet spot in their model, albeit a small one:

Planetary orbit and spin need to precess just right relative to the binary orbit. There is this tiny sweet spot.

The potential for habitable climates on Earth-like worlds in the galaxy and the universe in general, however, seems quite positive, according to Li:

In general, the separation between the stars is larger in binary systems, and then the second star has less of an effect on the model of Earth. The planet’s own motion dynamics dominate other influences, and obliquity usually has a smaller variation. So, this is quite optimistic.

This is great news for the search for life elsewhere. About half the stars in our galaxy exist in double star systems, and the new results suggest that many exoEarths in those systems should have stable climate systems, suitable for complex life to evolve.

Even if not right next door.

Bottom line: A new study of exoplanet axial tilts from Georgia Tech shows that many Earth-sized worlds, even in binary star systems, could have stable enough climates for complex life to evolve.

Via Georgia Institute of Technology