First exoplanet with evidence of tectonics

A new study reveals a distant exoplanet with one hemisphere pulsing with volcanic activity and the other hemisphere quietly providing the fuel. 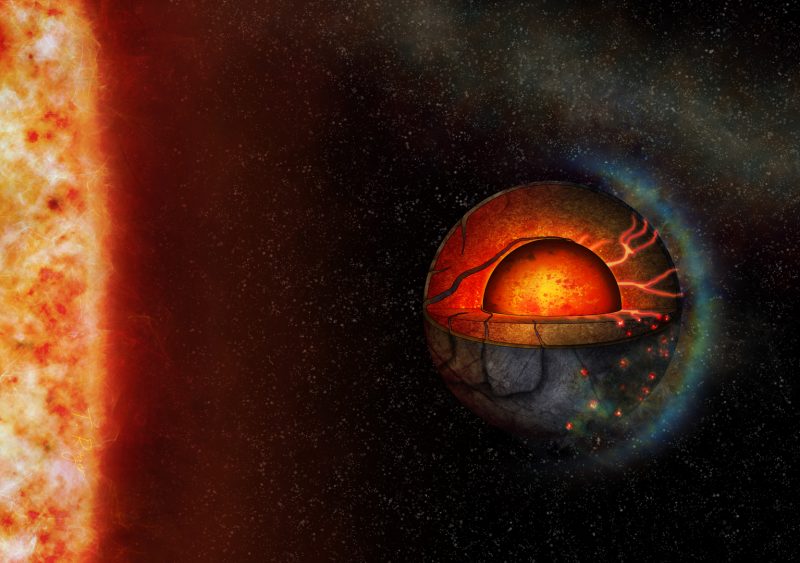 Artist’s concept of possible interior dynamics of the rocky exoplanet LHS 3844b. This cross section shows how material from one hemisphere flows into the planet and contributes to the upwelling on the opposite hemisphere. Image via University of Bern.

For the first time, scientists have found evidence of global tectonic activity – the movement of plates of a planet’s crust that happens due to heat inside the planet – on a world beyond our solar system. The new study, published February 24, 2021, in the peer-reviewed journal The Astrophysical Journal Letters, found that the distant exoplanet, 45 light-years from Earth, named LHS 3844b, has volcanic material that flows inside the planet from one hemisphere to the other.

LHS 3844b tightly orbits a red dwarf star, and is an exoplanet that is rocky and a bit larger than Earth. LHS 3844b is so near its parent star and zips around it so quickly that the planet’s year is just 11 hours long. Similar to Mercury, the closest planet to the sun in our solar system, LHS 3844b also lacks an atmosphere. This feature was helpful in discovering what was going on under the planet’s surface, said University of Bern’s Tobias Meier, who led the study. Meier said in a statement:

Observing signs of tectonic activity is very difficult, because they are usually hidden beneath an atmosphere.

This video from the BBC explains how plate tectonics work here on Earth.

Planet LHS 3844b’s closeness to its parent star resulted in it becoming tidally locked with the star – similar to the way that our moon is tidally locked with Earth – with the same side always facing the object it orbits. Therefore, the heat from the star bombards one side of the planet, causing its day side to register a scorching 800 degrees Celsius (about 1,500 degrees Fahrenheit). On the always-night side of the planet, temperatures drop to around -250 degrees C (-400 F).

The scientists suspected that the drastic temperature difference on the surface of the planet could impact what was happening inside. As Meier put it:

We thought that this severe temperature contrast might affect material flow in the planet’s interior.

On Earth, plate tectonics lifts mountains and tears apart the crust in earthquakes, while volcanoes spew out molten material from deep inside, renewing the Earth’s surface. The outgassing of volcanoes and rich volcanic soil have had consequences, both good and bad, for life here on Earth. Therefore, scientist consider tectonics an important feature when studying the habitability of distant worlds.

This initially counterintuitive result is due to the change in viscosity with temperature: cold material is stiffer and therefore doesn’t want to bend, break or subduct into the interior. Warm material, however, is less viscous – so even solid rock becomes more mobile when heated – and can readily flow towards the planet’s interior.

Whether the flow is eventually resolved to be day-to-night or night-to-day, the curious conditions of its hemispheres are the same: one side of this planet is pockmarked with volcanism while the other side has virtually none.

Bottom line: A team of scientists has created computer simulations that show a planet around a red dwarf star that might have material flowing internally from one side to the other, creating a volcanic hemisphere and a hemisphere with almost no volcanic activity.

Source: Hemispheric Tectonics on LHS 3844b