The solar eclipse of March 9, 2016 brought together students from around the world – and EarthSky helped to make it happen. 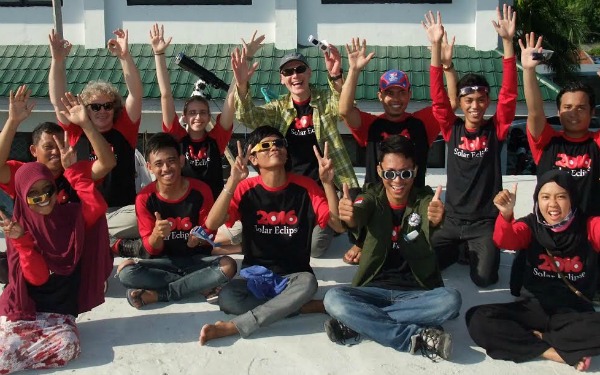 By Graham Jones of www.tensentences.com

“So where exactly is the moon right now?”

We were outside a cafe in Palu, on the Indonesian island of Sulawesi, two days before the total solar eclipse of March 9, 2016. I was sitting with my new friends, a group of friendly and inquisitive locals that had formed the moment I sat down – and had been growing ever since.

It was the middle of the afternoon, so I waved my hand in the direction of the sun and said:

Well, the moon is over there, getting closer and closer to the sun.

Yes, but where EXACTLY is the moon right now?

Wow, I thought, that’s a good question, and promptly began to have a minor panic about how difficult this cross-examination might become. I was already feeling a bit discombobulated after picking up a leaflet about the eclipse at the airport in Jakarta on my way to Palu. It was an excellent publication from the Ministry of Tourism, and included a list of timings for the eclipse at various locations across the Indonesian archipelago. At the bottom, however, was an ominous note: “This schedule is subject to change without prior notice.”

Hmm, that didn’t sound good. I was due to take part in an international seminar about eclipses at Tadulako University (Untad) on March 8. Other speakers included Thomas Djamaluddin, the chairman of Indonesia’s national space agency, and Miquel Serra-Ricart, from the Instituto de Astrofísica de Canarias in Spain. It would be embarrassing if we were standing there talking about the elegant certainty of Newtonian physics when everything suddenly went dark outside the window.

Back at the cafe, after much drawing of shapes in the air, we agreed that we were dealing with a waning crescent moon, which travels across the sky from east to west ahead of the sun. Eventually, we worked out that the moon would be somewhere between the sun and the western horizon, where it would soon be setting, lost in the bright glare of the sun. 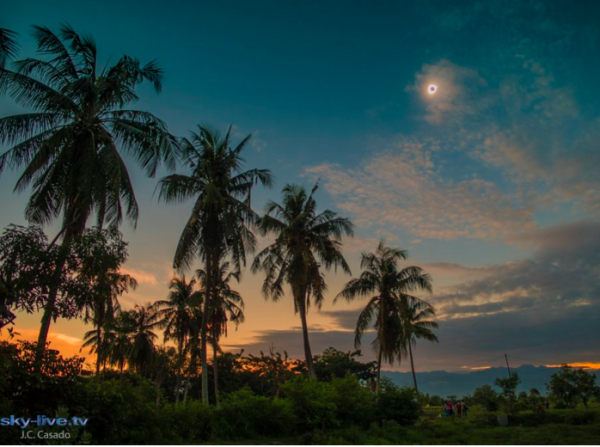 For me, this conversation underlined three things. One, eclipses are social events – they have a unique power for bringing people together around a shared experience. Two, eclipses can provide us with all kinds of teachable moments – they are a tremendous opportunity to think more about science and nature. Three, eclipses truly are global phenomena that add a wonderful dose of serendipity to life – were it not for the quirk of fate that sent the moon’s shadow this way, I would never have discovered that Palu is home to the warmest and most welcoming people you could ever hope to meet.

Nor would I have had the opportunity to find out about some of the extraordinary work that is going at Untad, whose beautiful campus offers stunning views across Palu Bay. Darmawati Darwis runs the university’s Centre for Organic Electronics (COE), a sister organization of the pioneering COE founded by Paul Dastoor at Newcastle University in Australia. Dr Darwis’s interdisciplinary team is helping to develop a new range of organic solar cells; in a rapidly developing country of 260 million people that is blessed by year-round sunshine but plagued by power cuts, this is some of the most exciting and important research going on in Indonesia today.

On the subject of serendipity (although this is, in fact, more an example of sagacity!) enormous thanks must go to EarthSky for helping to bring about a fantastic collaboration between Tadulako University and Western Kentucky University (WKU) in the USA. Last November, EarthSky published an article about a series of workshops I was organizing with Untad. These workshops were a part of a project I run called Global Communication and Science, which aims to help students improve their English-language skills, gain a deeper appreciation of the wonders of science, and connect with students in other countries. (This project has been generously supported by the airline Garuda Indonesia as part of its community development program.)

The article was seen by Richard Gelderman, a professor of physics and astronomy at WKU, who contacted me to say he would be taking a team to Palu as part of CATE, a citizen-science project that is aiming to collect 90 minutes’ worth of data on the solar corona during next year’s coast-to-coast eclipse across the continental USA. Within a few weeks, a cross-border team of students from Untad and WKU were working together online to select a site in Palu for the CATE telescope. Shortly after that, our team was approached by NASA’s Earth Science Division to ask if we could test some experiments during the eclipse for its GLOBE environmental program.

Overall this became a story of science, teamwork, friendship and – of course – the drama of totality itself. In an interview with sky-live.tv shortly before the eclipse, Dr. Gelderman said:

I’m hoping that the moment the sun disappears in the middle of the morning, my body will react in a very primal, caveman way. Not the type of logical thinking that I’m used to as a scientist, but a purely artistic, emotional feeling of, holy cow, the sun just disappeared.

For anyone looking for an excuse to visit Palu – which has rightly been described as “a piece of paradise on the equator”, and is home to the most delicious fried banana known to mankind – please note that there are only 15 years to go until the city’s next big astronomical extravaganza. Palu will be right on the center line for the annular eclipse of May 21, 2031…

Bottom line: The solar eclipse of March 9, 2016 brought students from around the world to Palu, Indonsia.