Asteroid Itokawa gives up its secrets

Itokawa is the 1st asteroid from which samples were obtained and returned to Earth. From these samples, scientists have figured out Itokawa’s true age and geologic history. 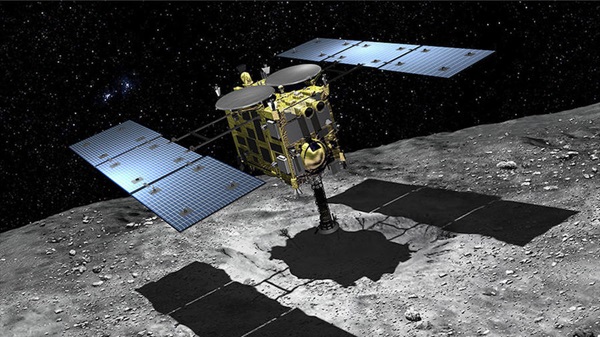 Artist’s concept of the Hayabusa spacecraft at asteroid Itokawa in 2005. Image via JAXA.

Back in 2005, the first asteroid sample-return mission – Japan’s Hayabusa spacecraft – reached its target, the asteroid Itokawa. In 2010, Hayabusa (Japanese for “peregrine falcon”) arrived back at Earth with its precious cargo of dust samples from the asteroid. In the years since, scientists have been busy studying those samples, to better understand the origin and geologic history of Itokawa. Now, a new peer-reviewed study, published in the journal Scientific Reports on August 7, 2018, details new findings about Itokawa’s age and origin for the first time.

The asteroid – basically a “rubble pile” held together by gravity – is 4.6 billion years old, about the same age as the solar system itself. But it didn’t always look the way it does now; the scientists determined that the “original” Itokawa had collided with another asteroid around 1.5 billion years ago, and was almost destroyed. The resulting debris, however, re-assembled back into the “rubble pile” we see today. Also, it seems that Itokawa inhabited the main asteroid belt up until only the past couple hundred thousand years or so. It now resides in a different orbit as a Near Earth Asteroid (NEA) or Earth-crossing asteroid, which may result in a collision with Earth within the next million years or so, according to scientists. That possibility is based on a previous study which simulated 39 nearly identical orbits of the asteroid. It’s also possible that Itokawa will break apart within that time. 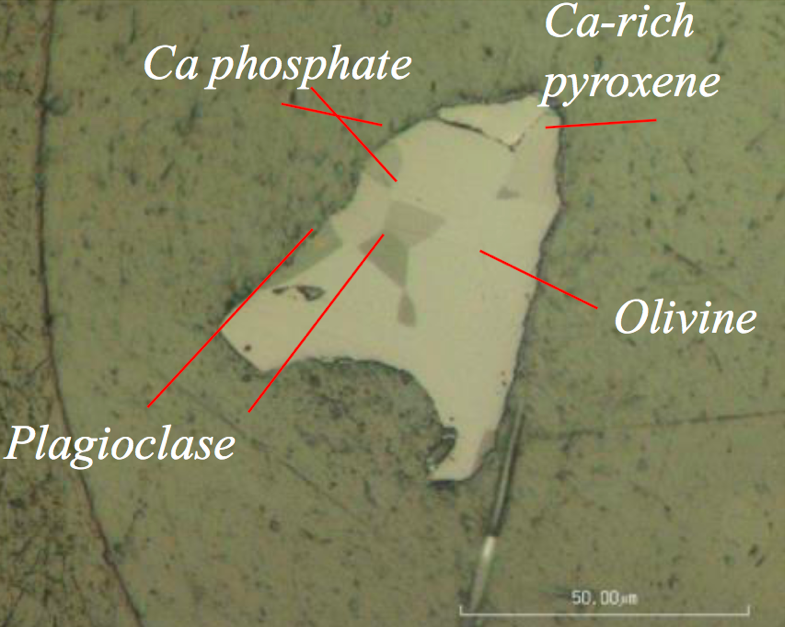 Close-up view of one of the microscopic dust particles from asteroid Itokawa, with various compositional elements noted. Image via Osaka University. 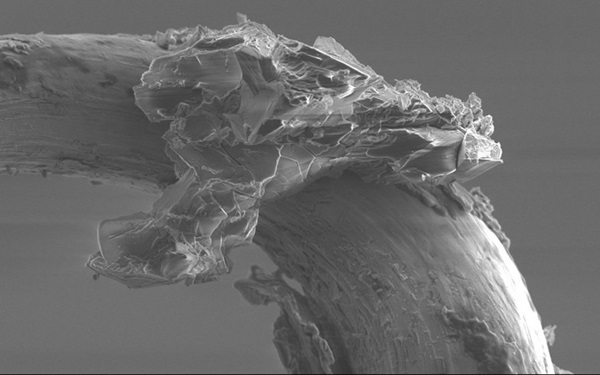 Another dust grain from Itokawa, showing incredible detail under a scanning electron microscope. Image via ESA.

This view of a dust grain shows the complex structure in fine detail. Image via JAXA.

As stated in the study:

The results indicate that an Earth impact of [Itokawa] is likely within a million years.

Hayabusa collected over 1,000 tiny dust grains altogether from Itokawa. A few of those grains are microscopic phosphate minerals. The researchers measured how much uranium within the phosphate grains had decayed into lead. Uranium decays at a known rate, so this helped to determine the specific age of the asteroid – 4.64 billion years old, give or take 180 million years. The researchers were also able to analyze different uranium and lead isotopes in the samples, which provided evidence that Itokawa collided with another asteroid about 1.51 billion years ago. There is more leeway with this age however – the collision could have been as “recent” as 660 million years ago, or as far back as 2.36 billion years ago. 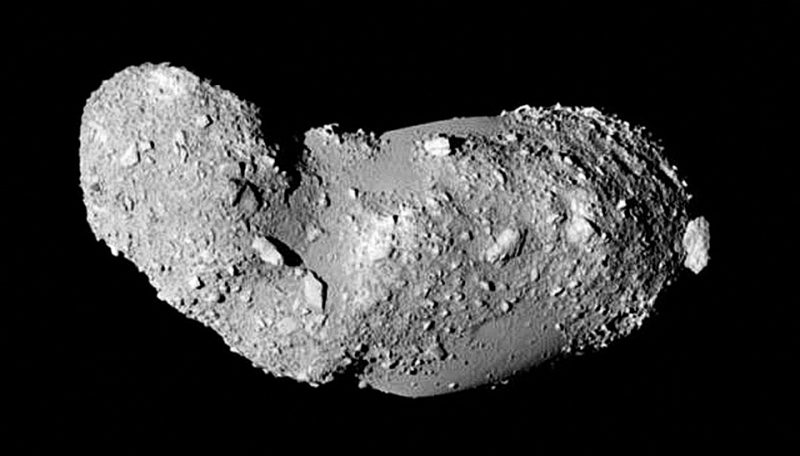 Itokawa, as seen by the Japanese spacecraft Hayabusa in 2005. The asteroid is basically a “rubble pile” of material held together by gravity. Image via JAXA/ISAS.

The mineralogy and geochemistry of the dust particles were also found to be similar to chondrite meteorites, which fall to Earth regularly. The researchers determined, however, that Itokawa had a different evolutionary timeline than whatever parent body the chondrite meteorites originally came from.

The Hayabusa mission was incredibly successful in bringing the first samples from an asteroid back to Earth, but it did have its problems as well. The spacecraft was hit by a solar flare not long after launch, but was still able to continue its journey, reaching Itokawa in 2005. A small lander included in the mission was lost after deployment and never reached the asteroid. The main spacecraft itself, however, was able to “touch down” briefly, collecting the needed dust samples. Those samples were finally returned to Earth on June 13, 2010, landing inside their heat-shielded capsule.

The Japanese space agency JAXA followed up the success of Hayabusa with Hayabusa2, which is currently examining the asteroid Ryugu – about a half-mile across with a rough diamond shape. Like the first mission, Hayabusa2 will ultimately return samples back to Earth for further study by scientists. Hayabusa2 arrived at Ryugu on June 27, 2018, and as previously reported in EarthSky, the mission team just picked a landing site for its onboard lander, called called the Mobile Asteroid Surface Scout (MASCOT). Hayabusa2 will leave Ryugu in December 2019, bringing its samples back to Earth for further analysis and study, in December 2020. 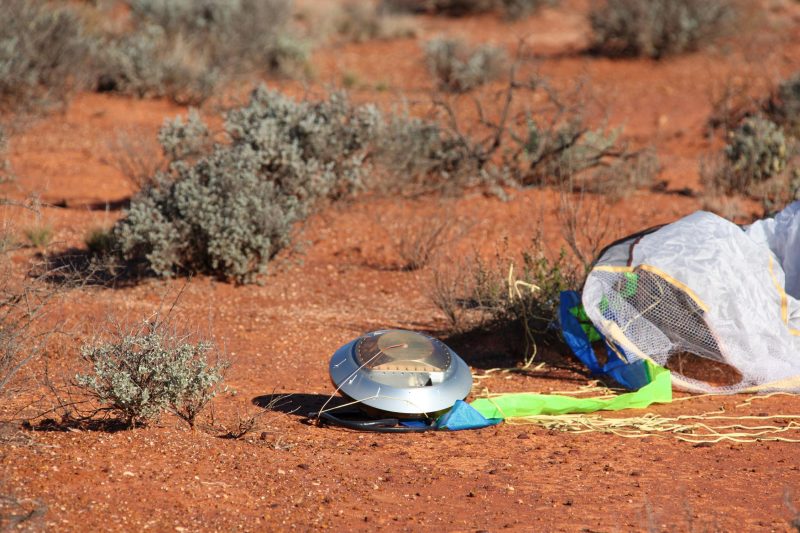 The return capsule which carried the dust grain samples of Itokawa back to Earth on June 30, 2010. Image via JAXA.

NASA’s Origins, Spectral Interpretation, Resource Identification, Security-Regolith Explorer (OSIRIS-REx) is also currently on final approach to asteroid Bennu, due to arrive this December. OSIRIS-REx will take samples as well, which will arrive back on Earth in September 2023. OSIRIS-REx just returned its first distant images of Bennu on August 17, 2018.

Bottom line: Itokawa was the first asteroid from which samples were obtained and returned to Earth. Study of those samples reveals the age and geologic history of the asteroid, while also providing valuable insight about the formation of asteroids in general.