We’ve got a landing site on asteroid Ryugu

The lander for Hayabusa2 mission at asteroid Ryugu is due to touch down on October 3. Now the site has been chosen! This Japanese mission will collect samples from the asteroid and bring them back to Earth. 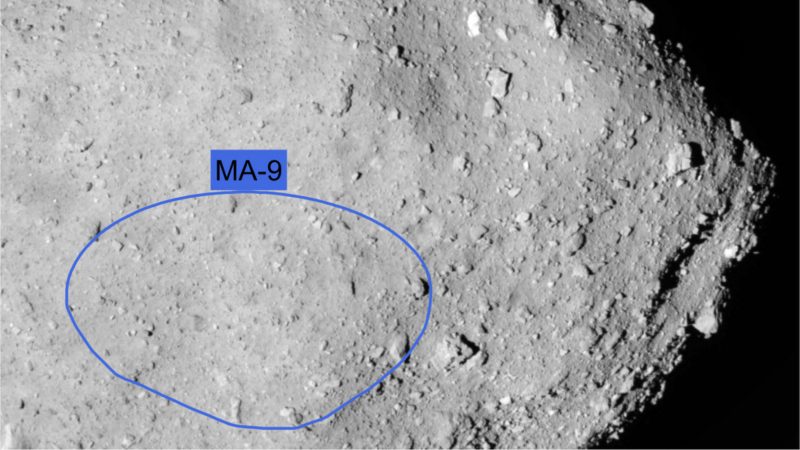 The MA-9 landing site on Ryugu for MASCOT, which will land on October 3, 2018. Image via AXA/DLR.

Ever since the Japanese Hayabusa2 spacecraft arrived at asteroid Ryugu on June 27, 2018, mission controllers have been busy looking for an ideal landing site. The lander – called the Mobile Asteroid Surface Scout (MASCOT) – is due to touch down on October 3, 2018. It’s clearly one of the most important parts of this sample-return mission. The landing site has now been determined, after consultation with 100 international and national partners, the German Aerospace Center (DLR) announced on August 23, 2018. DLR operates MASCOT, along with support from the French space agency CNES (Centre National d’Etudes Spatiales). MASCOT will land in a spot called MA-9 in the southern hemisphere of the 3,117-foot (950-meter) diameter asteroid. MA-9 was deemed to be the best candidate in terms of both science and accessibility. As explained by MASCOT project manager Tra-Mi Ho, of the DLR Institute of Space Systems:

From our perspective, the selected landing site means that we engineers can guide MASCOT to the asteroid’s surface in the safest way possible, while the scientists can use their various instruments in the best possible way. For the operation of our lander, the chosen landing site was among the favorites from the very start. 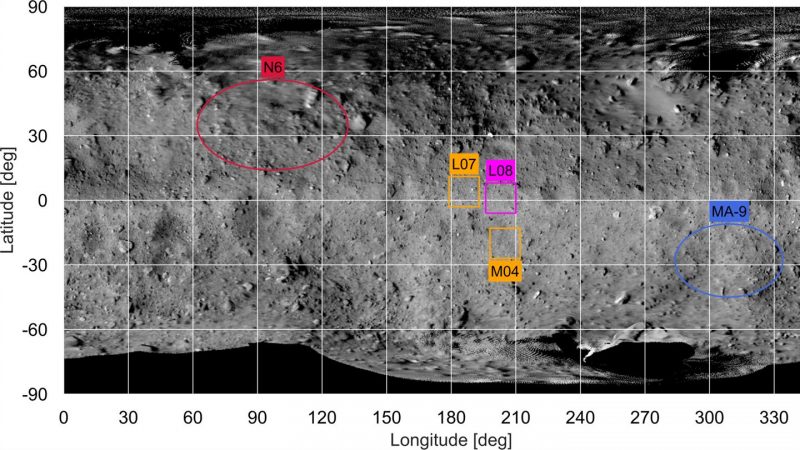 A larger view of the surface of Ryugu. MASCOT will land at MA-9, while Hayabusa2 itself will approach the surface at L07 (L08 and M04 are backup sites). The MINERVA rovers will land at the L6 location. Image via DLR.

The final landing site was chosen from 10 possible candidates, and is located at approximately 315 degrees east and 30 degrees south. Temperatures at the location range from 117 degrees Fahrenheit (47 degrees Celsius) during the day to -81 degrees Fahrenheit (-63 degrees Celsius) at night. Large boulders, up to 98 feet (30 meters) tall, are near the landing site but not right on it. The site is also some distance away from where Hayabusa2 itself will descend to the surface to take samples for return to Earth.

Instruments on MASCOT include the MicrOmega infrared hyperspectral microscope, the MAG magnetometer, the MasCam camera and the MARA radiometer. The landing site was determined to be favorable for both the lander and the instruments on board. 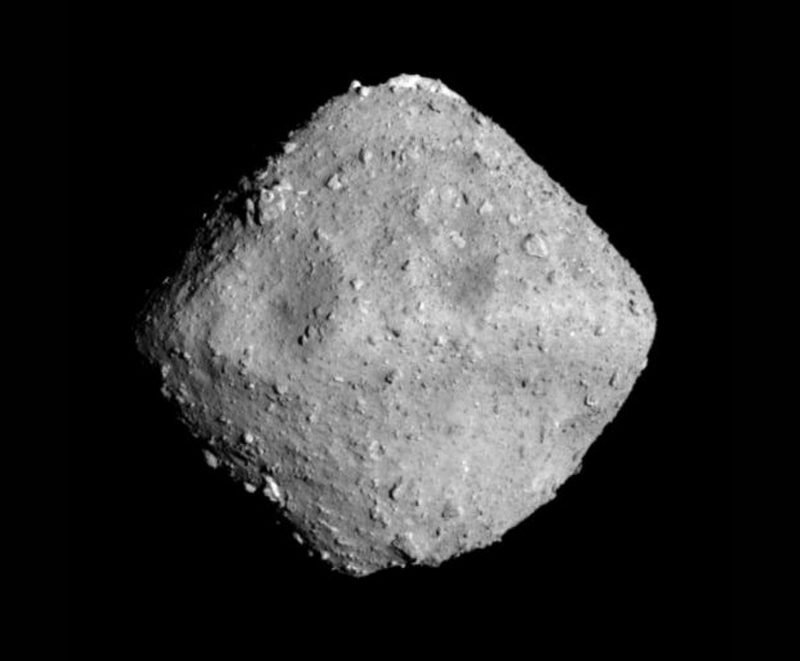 So what made MA-9 an ideal landing location? First, it features relatively pristine material on the surface which hasn’t been exposed to cosmic radiation for as long as some other areas. It also doesn’t have as many boulders, which could be a potential hazard for the lander, but caution is still warranted. As Ho noted:

But we are also aware: There seem to be large boulders across most of Ryugu’s surface and barely [any] surfaces with flat regolith. Although scientifically very interesting, this is also a challenge for a small lander and for sampling.

NASA’s OSIRIS-REx spacecraft has also just sent back its first distant images of asteroid Bennu, which it will reach on December 3, 2018. Image via NASA/Goddard/University of Arizona.

Hayabusa2 will leave Ryugu in December 2019, bringing back its precious samples to Earth for further analysis and study in December 2020. Those samples will help scientists understand how asteroids formed in the early solar system.

Ryugu was discovered on May 10, 1999, and orbits the sun at a distance of 0.96 to 1.41 AU once every 16 months. It is a near-Earth object and a potentially hazardous asteroid in the Apollo group of asteroids. It has a rare spectral type Cg, with qualities of both a C-type asteroid and a G-type asteroid.

Hayabusa2 also isn’t the only asteroid sample-return mission – NASA’s Origins, Spectral Interpretation, Resource Identification, Security, Regolith Explorer (OSIRIS-REx) is now currently on final approach to asteroid Bennu, due to arrive this December. The samples taken by OSIRIS-REx will arrive back on Earth in September 2023. OSIRIS-REx just returned its first distant images of Bennu on August 17, 2018.

Bottom line: A landing spot has now been chosen for the Mobile Asteroid Surface Scout (MASCOT) lander on asteroid Ryugu. The MASCOT lander is part of Japan’s Hayabusa2 mission to the asteroid, which will bring samples back to Earth in 2019.