After more than a month orbiting on Ceres’ dark side, Dawn has captured enough images to make this animation of the dwarf planet’s north pole.

This animation is made from the highest resolution images to date of the dwarf planet Ceres. The Dawn spacecraft – which arrived at Ceres on March 6, 2015 and has spent more than a month in orbit on the dwarf planet’s dark side – captured the images to make this animation of Ceres’ sunlit north pole on April 10. At the time, the spacecraft was descending toward its first planned science orbit – labeled RC3 in the diagram below – which will be 8,400 miles (13,500 kilometers) above Ceres’ surface. Dawn was at a distance of 21,000 miles (33,000 kilometers) when its framing camera took these images. It’ll reach the orbit RC3 on April 23.

Ceres is a tiny world – formerly labeled an asteroid, orbiting in the asteroid belt between Mars and Jupiter – with an average diameter of about 590 miles (950 kilometers).

Dawn’s visit to Ceres marks the first time an earthly spacecraft has orbited a dwarf planet. Of course, Ceres was not always called a dwarf planet. When Giuseppe Piazzi in Palermo discovered this body in 1801, it was thought by many to be the missing planet that had been proposed to lie between Mars and Jupiter. Later, when more bodies began to be discovered in the area between Mars and Jupiter, Ceres was labeled an asteroid. The International Astronomical Union decided to call it a dwarf planet in 2006, during the debate surrounding Pluto.

Before coming to Ceres, the Dawn spacecraft explored the giant asteroid Vesta for 14 months from 2011 to 2012.

Thus Dawn has the distinction of being the only spacecraft to orbit two worlds in space.

The spacecraft will remain at the RC3 orbit until May 9. Afterward, it will make its way to lower orbits. 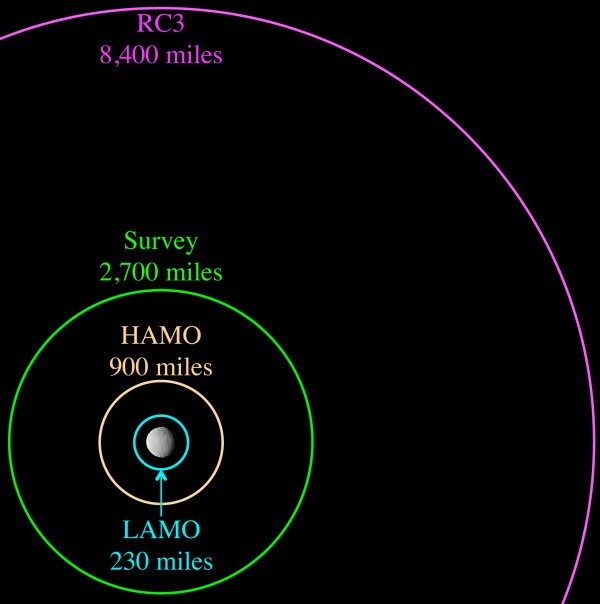 Here’s the image that has everyone intrigued about the dwarf planet Ceres. What are the two mysterious bright spots here? They’re not the only bright spots on Ceres, but these two – collected labled Spot 5 by scientists – are the most interesting. The Dawn spacecraft captured this image of dwarf planet Ceres on February 19, as it approached the planet, from a distance of nearly 29,000 miles (46,000 kilometers). Scientists speculate they might be an icy plume from Ceres’ surface. Image via NASA/JPL-Caltech/UCLA/MPS/DLR/IDA

Bottom line: Dawn has been orbiting on Ceres’ dark side, but it’s beginning to see the dwarf planet’s sunlit side as it descends toward its first science orbit, labeled RC3 in the diagram above – 8,400 miles (13,500 kilometers) above Ceres’ surface. In the meantime, on April 10, it captured images to make this animation of Ceres’ north pole.