Are moons forming around this distant gas giant planet?

After many years of searching, astronomers have finally found what appears to be a circumplanetary disk – that is, a disk of gas and dust – surrounding a young exoplanet. Evidence suggests that moons may be forming there. 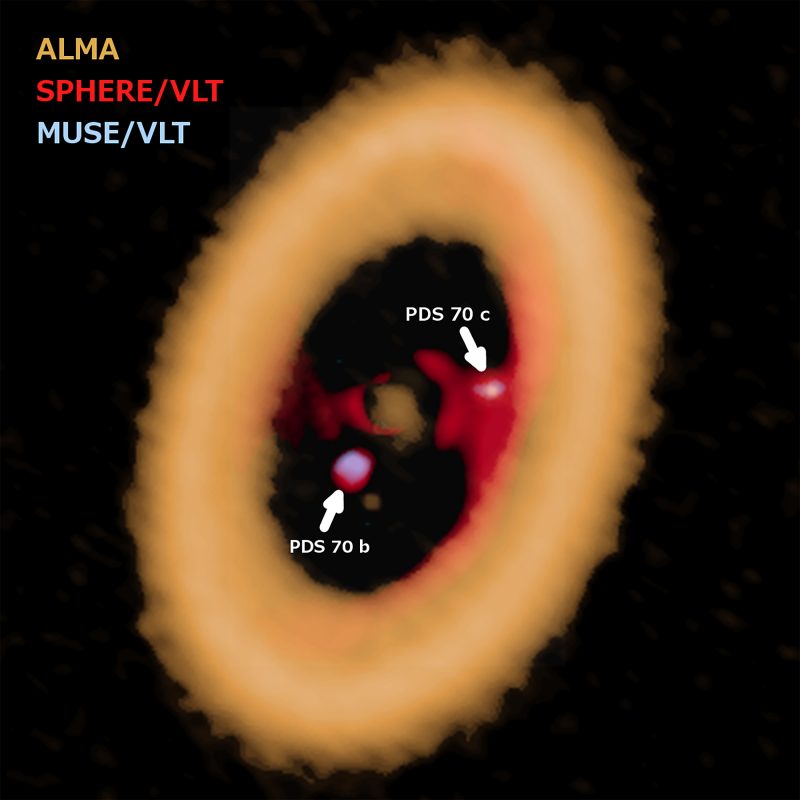 Composite image of a disk around the young star PDS 70, 370 light-years away. The system’s 2 planets are marked. Astronomers have found that the young planet designated PDS 70 c has a circumplanetary disk, a possible birthplace of exomoons. Image via ALMA (ESO/NAOJ/NRAO)/A. Isella/ESO.

It’s well-known that planets are born in circumstellar disks of gas and dust that surround young stars, and many of these have been observed by astronomers. Likewise, moons are thought to form in similar disks surrounding planets, but these have been more difficult to find. This month (July 11, 2019), astronomers announced the discovery of just such a disk surrounding a young gas giant planet in the PDS 70 star system, 370 light-years away. It’s the first-ever observation of the kind of circumplanetary disk that is believed to have given birth to the moons of Jupiter in our solar system more than 4 billion years ago.

The peer-reviewed discovery paper was published in The Astrophysical Journal Letters on July 11.

Scientists think it is similar to the kind of disk that once surrounded Jupiter and gave birth to its many moons because it surrounds a still-developing young gas giant planet, called PDS 70 c. As astronomer Andrea Isella from Rice University explained:

Planets form from disks of gas and dust around newly forming stars, and if a planet is large enough, it can form its own disk as it gathers material in its orbit around the star. Jupiter and its moons are a little planetary system within our solar system, for example, and it’s believed Jupiter’s moons formed from a circumplanetary disk when Jupiter was very young.

As Isella also noted in an article for the National Radio Astronomy Observatory (NRAO):

For the first time, we can conclusively see the telltale signs of a circumplanetary disk, which helps to support many of the current theories of planet formation. By comparing our observations to the high-resolution infrared and optical images, we can clearly see that an otherwise enigmatic concentration of tiny dust particles is actually a planet-girding disk of dust, the first such feature ever conclusively observed. 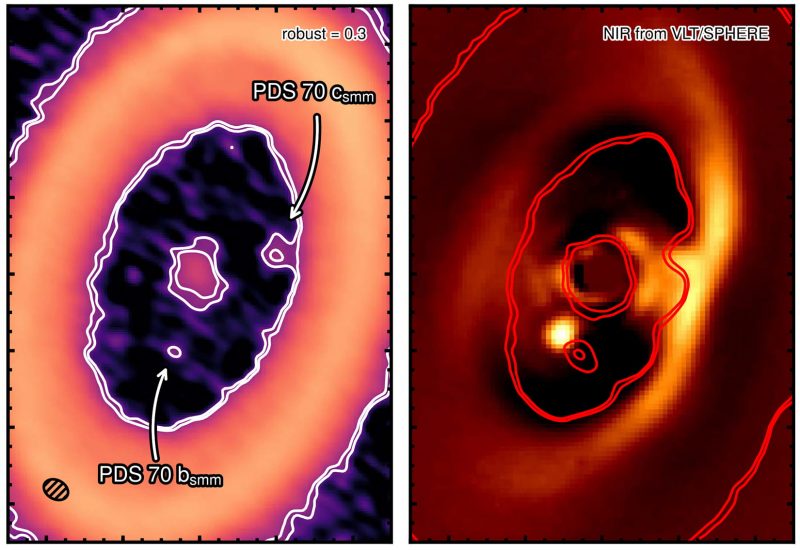 Comparison of the circumplanetary disk and PDS 70 c, as seen by ALMA (left) and earlier by VLT (right). The infrared image from VLT showed the second planet PDS 70 b, but not PDS 70 c or the disk. Image via A. Isella/ALMA (ESO/NAOJ/NRAO)/Rice University.

These kinds of circumplanetary disks are thought to not last very long, about 10 million years at most, so to find them astronomers need to look at very young star systems, where planets are still forming. Only a few candidate planets have been found before. According to Isella:

There are a handful of candidate planets that have been detected in disks, but this is a very new field, and they are all still debated. (PDS 70 b and PDS 70 c) are among the most robust because there have been independent observations with different instruments and techniques.

The astronomers made the discovery using the huge 66-antenna Atacama Large Millimeter/submillimeter Array (ALMA) in Chile; millimeter wave radio signals revealed the presence of dust grains where PDS 70 c and its sister planet, PDS 70 b, are still forming in the larger circumstellar disk.

PDS 70 b had first been observed in 2018 by the SPHERE instrument on the European Southern Observatory’s Very Large Telescope (VLT). SPHERE used infrared light to see the forming planets in the dust disk. In June of this year, astronomers used a different VLT instrument called MUSE, which observes in a visible wavelength of light called H-alpha. This wavelength is emitted when hydrogen falls onto a star or planet and becomes ionized. This was even better for confirming that the planets really were there, as Isella explained:

H-alpha gives us more confidence that these are planets because it suggests they are still drawing in gas and dust and growing. 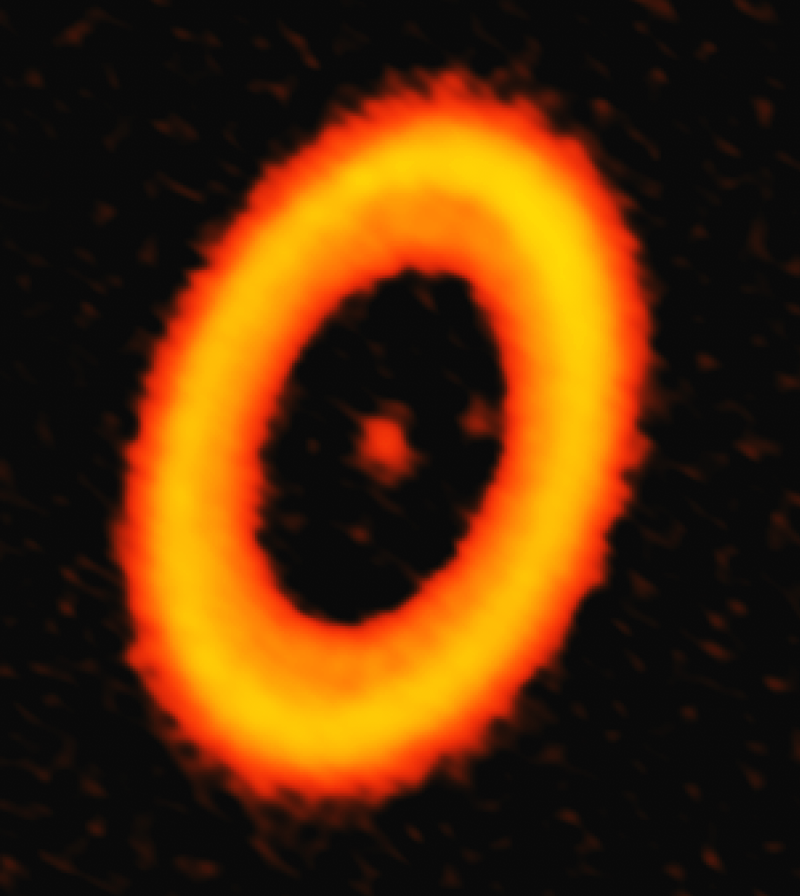 The new ALMA observations add to this previous evidence, showing that not only are the planets real, but they have the kind of disks surrounding them that should eventually form moons. Isella added:

It’s complementary to the optical data and provides completely independent confirmation that there is something there.

The ALMA observations are valuable since they are less limited than those of VLT. As Isella explained:

This means we’ll be able to come back to this system at different time periods and more easily map the orbit of the planets and the concentration of dust in the system. This will give us unique insights into the orbital properties of solar systems in their very earliest stages of development.

The newer ALMA data also shows that there are distinct differences between the two planets. The innermost, PDS 70 b, is about the same distance from its star as Uranus is from our sun, and has a tail-like mass of dust behind it. According to Isella:

What this is and what it means for this planetary system is not yet known. The only conclusive thing we can say is that it is far enough from the planet to be an independent feature.

PDS 70 c, the outermost of the two planets, shines brightly in the infrared and hydrogen bands of light. This means it is likely pretty much a fully-formed planet, although additional nearby gas is still being siphoned onto the planet’s surface. PDS 70 c lies about the same distance from its star as Neptune is from our sun, and its mass is estimated to be anywhere from 1-10 times that of Jupiter. If it is on the larger end of that scale, it could have planet-sized moons, according to Isella:

If the planet is on the larger end of that estimate, it’s quite possible there might be planet-size moons in formation around it. 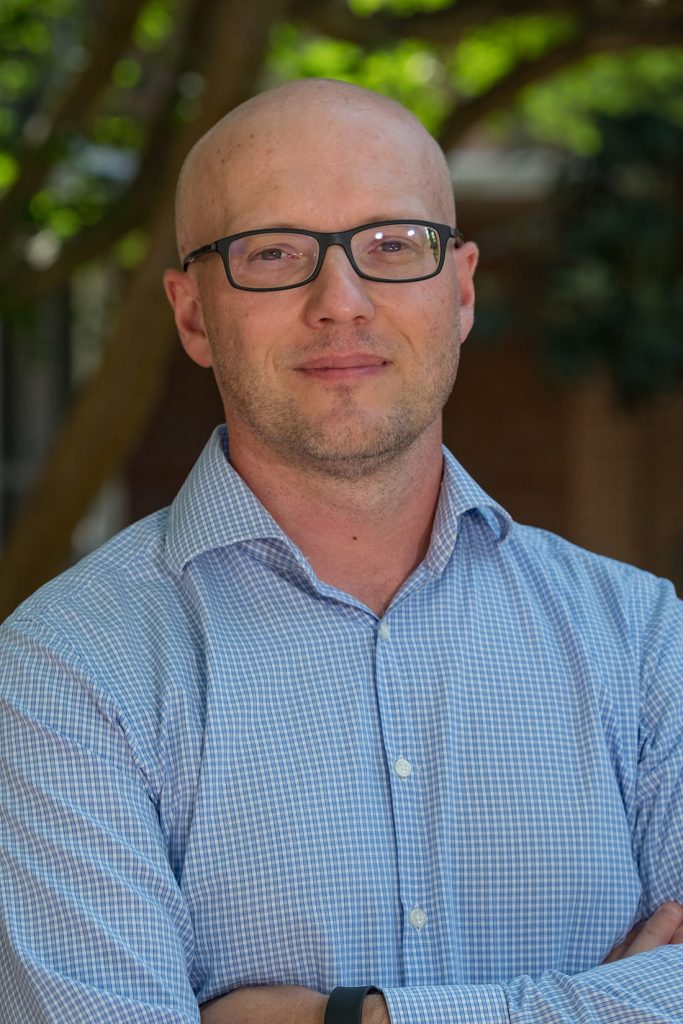 One possible planet-sized moon has – maybe –  already been found, orbiting the gas giant planet Kepler-1625b, 8,000 light-years away. This moon, if real, is about the size of Neptune, something unheard of in our solar system. This potential discovery is still a subject of much debate, however, and has not been confirmed yet.

These findings are exciting because planetary scientists have long thought that planets in other solar systems should have moons, just like in our own solar system. But finding them is difficult, and none have been confirmed yet, because they are much smaller than their host planets. If circumplanetary disks like the one surrounding PDS 70 c are common, then that would mean that moons are probably common as well. Some, or perhaps even many, of those might be ocean moons like Europa and Enceladus in our solar system, where life could conceivably exist.

There’s much that we don’t understand about how planets form, and we now finally have the instruments to make direct observations and begin answering questions about how our solar system formed and how other planets might form. 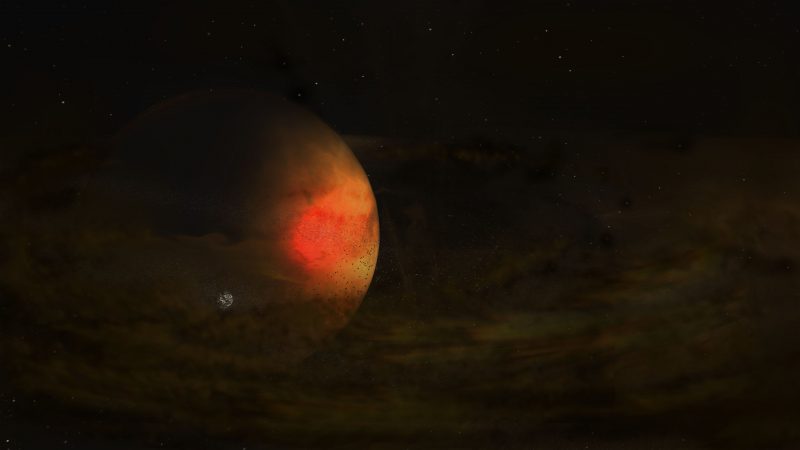 Artist’s concept of the circumplanetary disk of gas and dust surrounding the young gas giant planet PDS 70 c. Evidence suggests there may be moons forming in this disk. Image via NRAO/AUI/NSF/S. Dagnello.

Bottom line: For the first time, astronomers have confirmed a circumplanetary disk of gas and dust around a young gas giant planet, where alien moons might be forming.