Did the Hubble telescope find the 1st exomoon?

Astronomers have tantalizing new evidence for a possible Neptune-sized moon orbiting the gas-giant planet Kepler-1625b, some 8,000 light-years away.

Astronomers recognize eight major planets in our solar system, with 200 orbiting moons known so far. Much farther away, they’ve discovered nearly 4,000 exoplanets orbiting other stars, but, to date, no exomoons have conclusively been found, despite some earlier possibilities. On Wednesday, however – October 3, 2018 – astronomers announced new evidence for what could be the first true discovery of an exomoon. It appears to orbit the planet Kepler-1625b, 8,000 light-years away, in the direction of the constellation Cygnus the Swan, high in the west on October evenings.

Astronomers David Kipping and Alex Teachey, both of Columbia University, used data from both the planet-hunting Kepler spacecraft and the Hubble Space Telescope to discover the possible exomoon. It’s a saga that’s been unfolding for these astronomers over several years, and the final results still aren’t in … but the new evidence is tantalizing. If an exomoon does indeed orbit Kepler-1625b, Kipping said:

The closest analog would be picking up Neptune and putting it around Jupiter.

If it can be confirmed, this first known exomoon also presents astronomers with a riddle. Such large moons don’t exist in our own solar system. This discovery might require experts to revisit their theories of how moons form around planets. Thomas Zurbuchen at NASA headquarters in Washington, D.C., commented:

If confirmed, this finding could completely shake up our understanding of how moons are formed and what they can be made of.

The scientific study of a possible exomoon for Kepler-1625b was published Wednesday in the peer-reviewed journal Science Advances.

Just as most planets outside our solar system have never been seen directly, we don’t have a direct image of this possible exomoon. 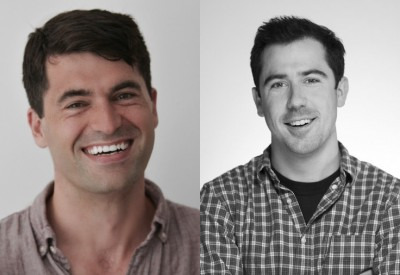 “It was definitely a shocking moment to see that Hubble light curve, my heart started beating a little faster … ” said astronomer David Kipping (left). He and Alex Teachey (right), both of Columbia University, may be co-discovers of the 1st exomoon.

Instead, astronomers have discovered most known exoplanets – and this exomoon – during their passages in front of their stars. Such an event is called a transit, and it causes a tiny dip in the star’s light. The transit method has been used to detect most of the known exoplanets cataloged to date.

David Kipping has spent about a decade of his career looking for exomoons. In 2017, he and his team analyzed data from 284 exoplanets discovered by the planet-hunting Kepler spacecraft. They looked at exoplanets in comparatively wide orbits, longer than 30 days, around their host stars. The researchers found one instance, in Kepler-1625b, of a transit signature with intriguing anomalies, suggesting the presence of a moon. Kipping said:

We saw little deviations and wobbles in the light curve that caught our attention.

Kipping then requested time on the Hubble Space Telescope. The new Hubble results – though inconclusive – appear to confirm the earlier finding of an exomoon for Kepler-1625b. The announcement of the discovery at HubbleSite explained:

Based upon their findings, the team spent 40 hours making the observations with Hubble to study the planet intensively — also using the transit method — obtaining more precise data on the dips of light. Scientists monitored the planet before and during its 19-hour transit across the face of the star. After the transit ended, Hubble detected a second and much smaller decrease in the star’s brightness approximately 3.5 hours later. This small decrease is consistent with a gravitationally-bound moon trailing the planet, much like a dog following after its owner.

Unfortunately, the scheduled Hubble observations ended before the complete transit of the candidate moon could be measured and its existence confirmed.

A companion moon is the simplest and most natural explanation for the second dip in the light curve and the orbit-timing deviation.

It was definitely a shocking moment to see that Hubble light curve; my heart started beating a little faster and I just kept looking at that signature. But we knew our job was to keep a level head and essentially assume it was bogus, testing every conceivable way in which the data could be tricking us.

Earth’s moon is known to be a major factor in the evolution, possibly even the presence, of life on our planet. This possible exomoon and its host planet lie within their star’s habitable zone, the region around a star where liquid water might exist on planetary surfaces. Could the planet, or its moon, be life supporting? The answer is: probably not. Both the exoplanet Kepler 1625b – and its possible exomoon – are gaseous, making them unsuitable for life as we know it.

These astronomers said that future searches for exomoons:

… will target Jupiter-sized planets that are farther from their star than Earth is from the sun. The ideal candidate planets hosting moons are in wide orbits, with long and infrequent transit times. In this search, a moon would have been among the easiest to detect because of its large size.

Currently, there are just a handful of such planets in the Kepler database.

Whether future observations confirm the existence of the Kepler-1625b moon, NASA’s upcoming James Webb Space Telescope will be used to find candidate moons around other planets, with much greater detail than Kepler. 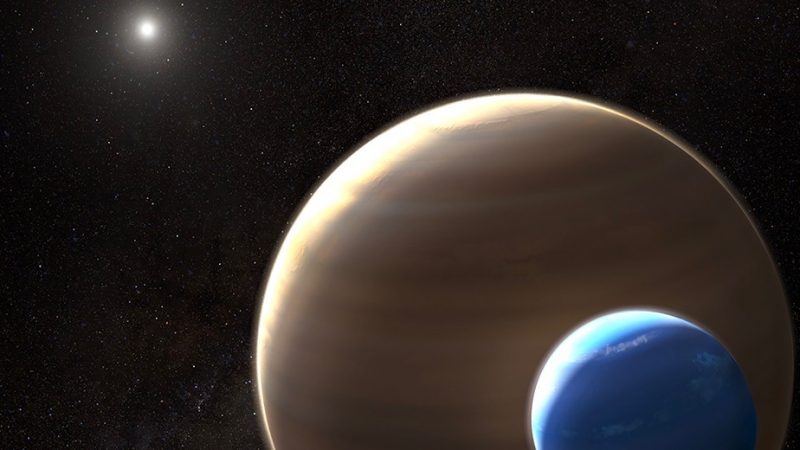 Artist’s concept of a possible Neptune-sized moon, orbiting a planet several times larger than Jupiter – our solar system’s largest planet – in a distant solar system, some 8,000 light-years away. Image via HubbleSite.

Bottom line: Astronomers at Columbia University found evidence in Kepler spacecraft data in 2017 suggesting an exomoon orbiting Kepler-1625b. They then requested time on the Hubble Space Telescope, and the new Hubble data boosts the claim – but does not prove conclusively – that this moon exists.