Astronomers may have spotted the first exomoon!

If it’s true this distant planet has a moon, the moon would weigh less than Earth, and the planet would be more massive than Jupiter. 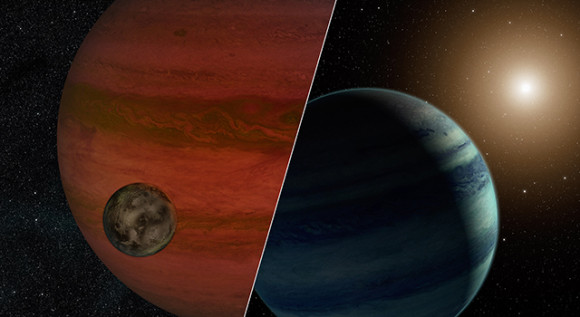 Researchers have detected the first “exomoon” candidate – a moon orbiting a planet that lies outside our solar system. This illustration depicts the two possibilities. On the left, a planet/moon pairing. On the right, a planet and star. Artist’s illustration via NASA/JPL-Caltech

It wasn’t very long ago that the only planets we knew were those inside our own solar system. As of yesterday, we now know of 1,780 planets outside our solar system, according to the Exoplanet Encyclopedia. Now researchers have detected the first exomoon candidate – a moon orbiting a planet that lies outside our solar system. Using a technique called microlensing, they observed what could be either a moon and a planet – or a planet and a star. The artist’s conept above depicts the two possibilities, with the planet/moon pairing on the left, and star/planet on the right. If the moon scenario is true, the moon would weigh less than Earth, and the planet would be more massive than Jupiter.

The possible new planet-moon system is called MOA-2011-BLG-262. Astronomer David Bennett of the University of Notre Dame, Indiana, is lead author of a new paper on the system. The work appears in the Astrophysical Journal. Bennett said in a press release on April 10:

We won’t have a chance to observe the exomoon candidate again, but we can expect more unexpected finds like this.

The scientists can’t confirm the results partly because microlensing events happen once, due to chance encounters. The events occur when a star or planet happens to pass in front of a more distant star, causing the distant star to brighten. If the passing object has a companion — either a planet or moon — it will alter the brightening effect. Once the event is over, it is possible to study the passing object on its own. But the results would still not be able to distinguish between a planet/moon duo and a faint star/planet. Both pairings would be too dim to be seen.

In the future, it may be possible to enlist the help of multiple telescopes to watch a lensing event as it occurs, and confirm the presence of exomoons.

Read more about the new possible exomoon from NASA JPL