At this writing (11 UTC, or 6 a.m. CDT on May 24), it appears that no one is reporting a strong meteor shower from last night’s Camelopardalid shower. A few people saw a few meteors. Spaceweather.com said that:

Meteor rates in many places were no more than 5 or 10 per hour.

… Another possibility is that the shower is not a dud, just delayed. If models mis-located the debris zone, an outburst could still occur later on May 24th.

Overall, a disappointment to many.

Weather reports for our area 20 miles north of Kingston, Ontario didn’t look promising, but I set my alarm for 2:00 a.m. to check. Hit the snooze button, then dragged my groggy self out of bed. Clear sky!

Bundled up with warm clothes and big klunkety boots that would keep my feet warm and dry in the rain soaked grass, collected camera and tripod and headed out to where I had a view of Camelodorkus just over the trees. Set up and waited. Held my breath with anticipation. And waited. Fiddled with the camera. Whistled to the whipporwill. And waited. Meteor “shower” my ***! Saw one fast little meteor whizz across Ursa Major, watched the ISS and a couple of satellites come over, but meteor “shower”? Nada. Once again my hopes for lovely sparklies was dashed like fine crystal over a rock cliff.

This sleep-depriving bone chilling stiff neck inducing event of major disappointment brought to you by the same sadistic fiends who promised me that Comet Eyesore would be the comet of the century. Pfft! Phooey! Rats!

Disappointment here in Alberta as well. A dozen observers combined to see zero (0) unambiguous Camelopardalids. A few sporadics, a couple of maybes, & a whole lot of nothing. Skies were compromised at first but opened wide from 07-08:00 UT. My own obs consisted of one anthelion meteor we also listened on the car radio’s FM band but there was nothing but white noise 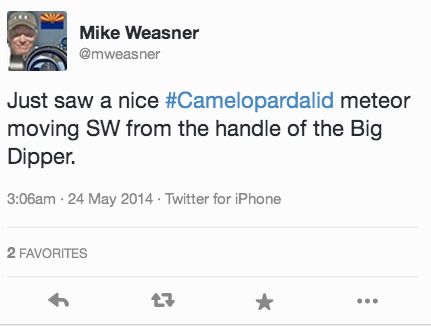 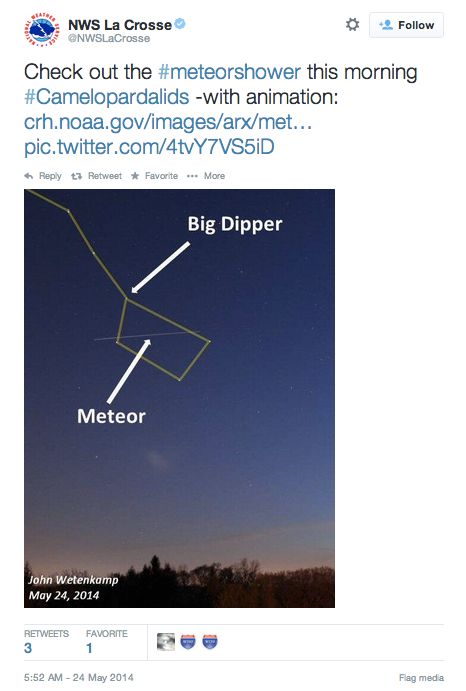 Alan Dyer, also in Canada, reported in his blog that cloud cover rolled in a the peak, but, prior to that, he saw few meteors:

I had very good skies for the first couple of hours of darkness, from a viewpoint looking north over the prairies on the high rim of the Cypress Hills, Alberta. Clouds did move in about 12:30 a.m., about the time the shower was to be peaking. But up to that point I had sighted just a handful of meteors and many were likely random ones, as they didn’t seem to be streaking out of the radiant point. A few other people who had converged at the site saw other meteors to the south that might have been shower members.

Perhaps the peak came later under cover of clouds. But up to 12:30 a.m. I saw little sign of an active shower. Still, it was worth taking the chance to chase into clear skies in hopes of bagging a herd of Camelopardalids. 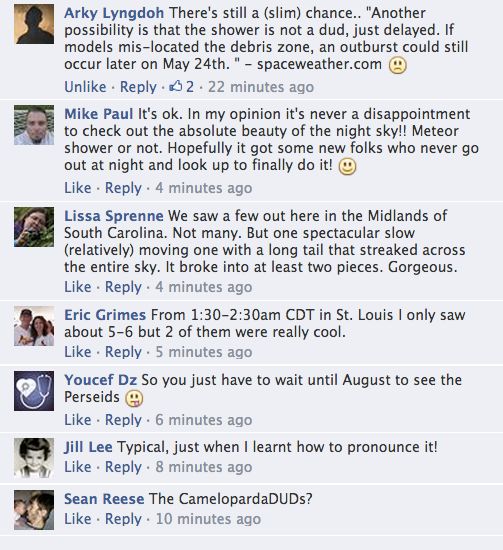 Bottom line: Camelopardalids did not put on their predicted show for observers in N. America, at least. What the heck, astronomers?

TwitterFacebookPinterestBufferShare
Posted
May 24, 2014
in
Human World

Thank you! Your submission has been received!
Oops! Something went wrong while submitting the form.
END_OF_DOCUMENT_TOKEN_TO_BE_REPLACED