In other words, magnetars – tiny neutron stars that are the strongest magnets in the universe – power long-duration gamma-ray bursts. 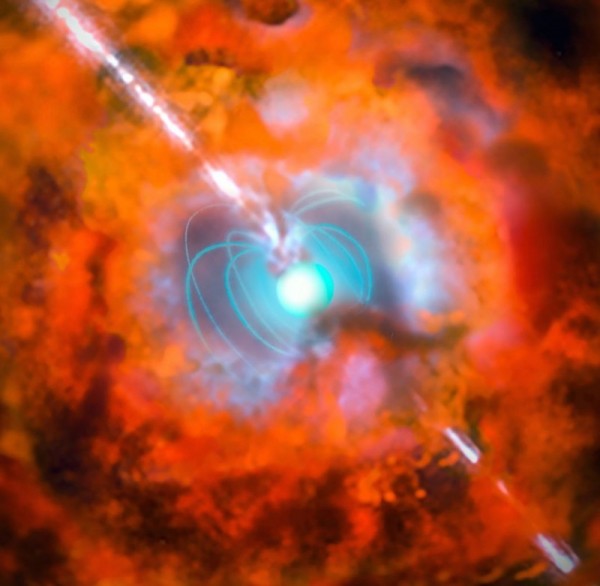 Artist’s impression of a supernova and associated gamma-ray burst driven by a rapidly spinning neutron star with a very strong magnetic field — a magnetar. Image via ESO

Astronomers say they’ve demonstrated a link between a very long-lasting burst of gamma rays – detected from Earth on on December 9, 2011 – and an unusually bright supernova explosion. In the process, they’ve shown that the supernova was not driven by radioactive decay, as expected. Instead, these astronomers say, it was powered by the decaying super-strong magnetic fields around an exotic object called a magnetar. These astronomers’ results appear in the journal Nature on July 9, 2015.

Magnetars are neutron stars. They are the bizarre super-dense remnants of supernova explosions. They’re the strongest magnets known in the universe — millions of times more powerful than the strongest magnets on Earth. You may have heard that pulsars are the most common class of observable neutron stars, and that is true. But magnetars are thought to develop magnetic field strengths that are 100 to 1,000 times greater than those in pulsars.

Mysterious gamma-ray bursts (GRBs) are a result of exotic and violent processes taking place in our universe. In most cases, they’ve believed to consist of a narrow beam of intense radiation released during a supernova or hypernova as a rapidly rotating, high-mass star collapses to form a neutron star, quark star, or black hole. Their high-energy radiation doesn’t penetrate Earth’s atmosphere, so orbiting telescopes are needed to detect them. Later, other telescopes – both in space and on the ground – are used to study them.

GRBs usually only last a few seconds, but, in very rare cases, the gamma rays continue for hours. One such ultra-long duration GRB was picked up by the Swift satellite on December 9, 2011 and named GRB 111209A. It was both one of the longest and brightest GRBs ever observed. 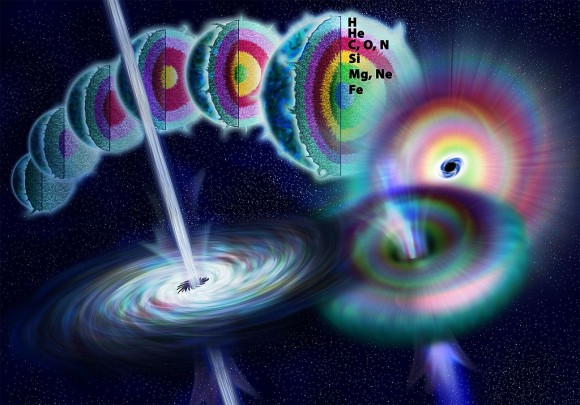 Artist’s impression of the life of a massive star. Nuclear fusion converts lighter elements into heavier ones, but eventually fusion no longer generates enough pressure to counteract gravity, and the star rapidly collapses. At that point, it might explode as a supernova. Theoretically, energy may be released during the collapse along the axis of rotation to form a gamma-ray burst. Image via National Science Foundation.

As the afterglow from the December 9, 2011 gamma ray burst faded, astronomers studied it using both the 2.2-meter telescope at La Silla and also the Very Large Telescope (VLT) at Paranal. They found the clear signature of a supernova, later named SN 2011kl.

This is the first time that a supernova has been found to be associated with an ultra-long GRB.

Jochen Greiner of the Max-Planck-Institut für extraterrestrische Physik in Germany is lead author of the new study of this object. He explained:

Since a long-duration gamma-ray burst is produced only once every 10,000 to 100,000 supernovae, the star that exploded must be somehow special.

Astronomers had assumed that these GRBs came from very massive stars — about 50 times the mass of the sun — and that they signaled the formation of a black hole.

But now our new observations of the supernova SN 2011kl, found after the GRB 111209A, are changing this paradigm for ultra-long duration GRBs.

The astronomers say the only explanation that fit the observations was that a magnetar was involved.

The new results provide good evidence for an unexpected relation between GRBs, very bright supernovae and magnetars. Some of these connections were already suspected on theoretical grounds for some years, but linking everything together is an exciting new development.

The case of SN 2011kl/GRB 111209A forces us to consider an alternative to the collapsar scenario. This finding brings us much closer to a new and clearer picture of the workings of GRBs.

Bottom line: According to new research published in Nature on July 9, 2015, some long-duration gamma-ray bursts are driven by magnetars – tiny neutron stars that are the strongest magnets in the universe.