A member of the Cassini spacecraft’s imaging team spied a mysterious object at edge of Saturn’s A ring and named it Peggy.

On April 15, 2013, the cameras on NASA’s Cassini spacecraft photographed a strange kink at the edge of Saturn’s A ring. Carl Murray, an astronomer at Queen Mary University of London and member of Cassini’s imaging team, spotted it a few days later. He said this week at the 2013 American Geophysical Union meeting in San Francisco that he’d personally never seen anything like it before. He said that – because he was analyzing the images on April 19, the same day as his mother-in-law’s 80th birthday – he decided to named the mystery object Peggy, in her honor. 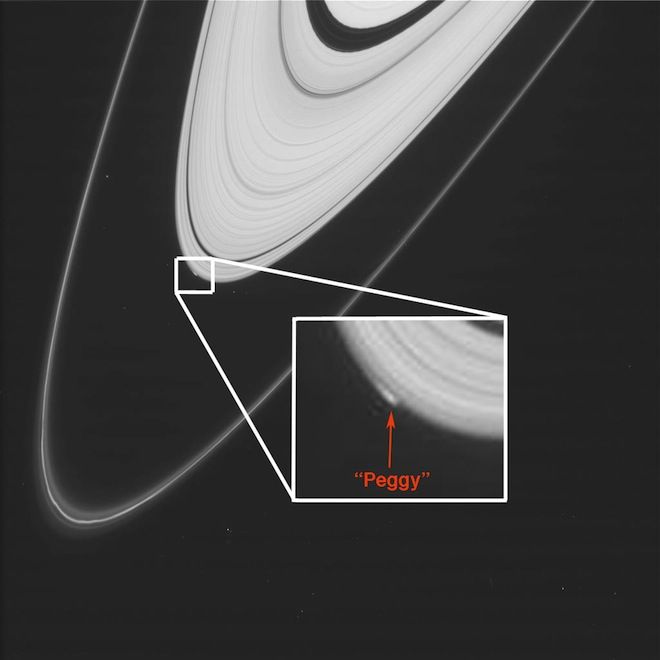 View larger. | A mysterious object – which astronomers are calling Peggy – turned up last April as a kink in Saturn’s A ring. Image via NASA/JPL/Space Science Institute.

Peggy is only known to astronomers by the interference it causes. This object is thought to be about a kilometer in diameter, which is too small to be seen by Cassini’s cameras. What astronomers see instead is a “disturbance” in Saturn’s rings.

That’s why they’re calling the object a moon or even a moonlet. They reserve those terms for objects at least 10 times bigger than Peggy is thought to be.

No one knows what Peggy is, exactly. One possibility is that it might be an accumulation in ring material, in which case it could be a moon of Saturn in the process of formation. If so, that would be an exciting find for astronomers!

Read more about the object near Saturn’s A ring – Peggy – at Wired.

Bottom line: Astronomers using imaging data from the Cassini spacecraft – which has been orbiting Saturn since 2004 – have discovered a strange disturbance in Saturn’s A ring. From it, they inferring the presence of a small object, perhaps only about a kilometer in diameter. They’ve named the object Peggy.