Twenty years after Montreal Protocol limited emissions of ozone-destroying chemicals, the Antarctic ozone hole has stabilized but has not begun to recover. 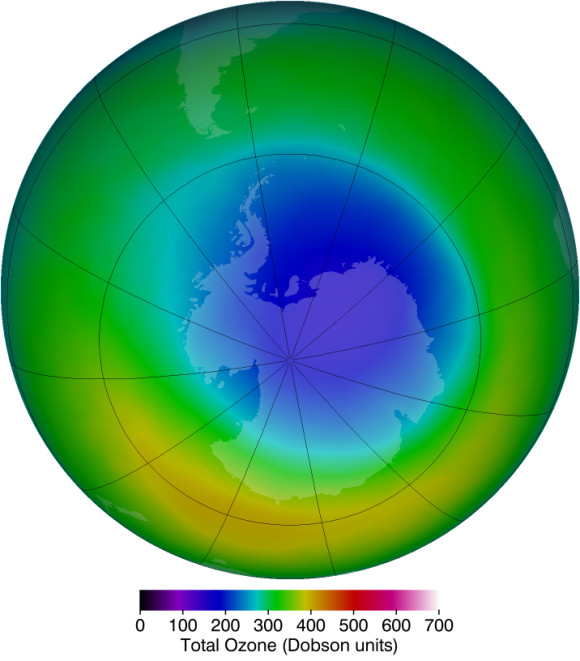 The 2013 ozone hole over Antarctica at the peak of this year’s season of ozone depletion, October, 2013. This year’s ozone hole was slightly smaller than the average for recent decades. Image via NASA/Ozone Hole Watch.

Twenty years after the Montreal Protocol, Antarctica’s ozone hole isn’t growing substantially larger each year, but it isn’t actually recovering – clearly growing smaller each year – yet, either. Atmospheric scientists reported that conclusion on December 11, 2013 to an audience of Earth scientists at the ” target=”_blank”>2013 American Geophysical Union meeting in San Francisco. These scientists presented results of two new studies, indicating that variations in temperature and winds drive year-to-year changes the size of the ozone hole. Susan Strahan of NASA’s Goddard Space Flight Center in Greenbelt, Maryland presented this work, saying:

Ozone holes with smaller areas and a larger total amount of ozone are not necessarily evidence of recovery attributable to the expected chlorine decline.

The map revealed more ozone at upper altitudes in early October, carried there by winds, above the ozone destruction in the lower stratosphere. The scientists concluded that:

… meteorology [not chemistry] was responsible for the increased ozone and resulting smaller hole, as ozone-depleting substances that year were still elevated.

This study has been submitted to the journal of Atmospheric Chemistry and Physics. 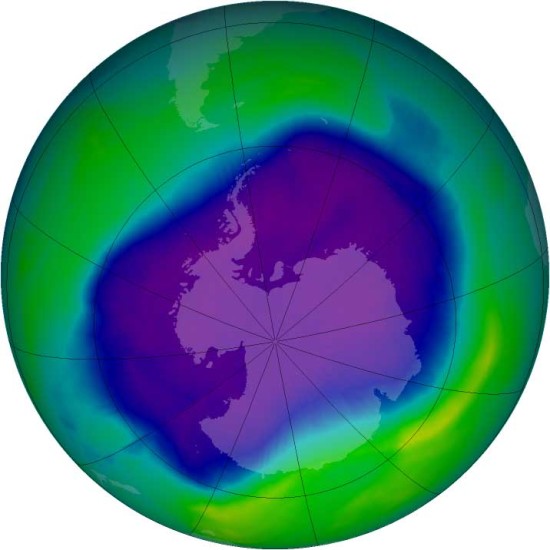 The 2006 ozone hole broken records for area and depth. But meteorology, not chemistry, may have been the reason. Read more about the 2006 hole here and about Susan Strahan’s recent study on this ozone hole here.

A second study – led by Strahan – looked at the ozone holes of 2006 and 2011 – two of the largest and deepest holes in the past decade. Her work showed that that, in 2011, there was less ozone destruction than in 2006 because the winds transported less ozone to the Antarctic – so there was less ozone to lose. Again, a meteorological – not chemical – effect.

In contrast, wind blew more ozone to the Antarctic in 2006 and thus there was more ozone destruction. This research has been submitted to the journal Geophysical Research Letters.

No one really knows how fast Earth’s ozone layer can be expected to recover, since the Montreal Protocol called for limiting emissions of ozone-depleting chemicals more than 20 years ago.

The Montreal Protocol on Substances that Deplete the Ozone Layer went into effect on January 1, 1989. The treaty was hailed as an example of how countries can work together successfully toward an important goal. And Earth’s ozone layer is important. It’s what protects us from harmful UV rays from the sun. Still, there are many unknowns in trying to alter such a large-scale, human-made structure on Earth as an ozone hole.

Scientists have been watching for a clear trend in decreasing sizes for the Antarctic ozone hole. According to Susan Strahan and her colleagues, that has not yet begun to happen.

Read about the two new studies on Antarctic ozone, showing it is not yet in recovery.