Biggest asteroid to pass close (and undetected) this year

Asteroid 2020 LD passed within the moon’s distance on June 5, but wasn’t discovered until June 7. It’s the 45th known and the largest asteroid to sweep within a lunar-distance of Earth so far in 2020.

We hear a lot about asteroids or comets passing close to Earth, but what does “close” mean? For a comet, it might mean millions of miles. For an asteroid, it might mean enormous distances as well, beyond the moon’s orbital distance of about a quarter-million miles. On the other hand, space rocks coming closer than our moon catch people’s attention, especially if the asteroids are good-sized! That was the case with asteroid 2020 LD, which swept closest to Earth on June 5, flying by at only about 80% of the moon’s distance (190,559 miles or 306,675 km). At around 400 feet (122 meters) in diameter, 2020 LD is the largest asteroid to have come within one lunar-distance this year … or last year … in fact, since 2011. And it also ranks as one of the biggest asteroids ever to fly this close to Earth without being previously detected. That’s right. 2020 LD passed undetected on June 5. No one noticed it until two days later, on June 7.

It was only after analyzing the space rock’s orbit that scientists realized its closest approach to Earth had happened two days before, on June 5.

Asteroids fly between the moon’s orbit and Earth pretty frequently. You might be surprised at how frequently. The chart below – via The Watchers – shows the number of asteroids that have come that close from January 1 to June 9, 2020. 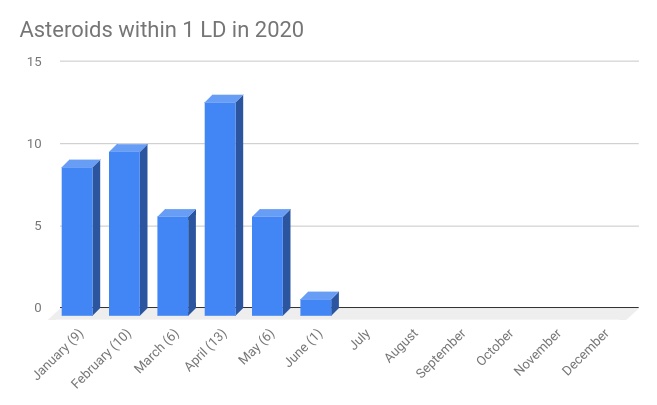 Image via The Watchers.

But 2020 LD isn’t your typical close-passing asteroid. Again, it’s the biggest asteroid to have passed within the moon’s orbit since 2011.

Is a 400-foot asteroid large in an absolute sense? Not particularly. On the scale of asteroids in general – those orbiting mostly in the asteroid belt between Mars and Jupiter – we might say that 2020 LD falls somewhere between medium and small. The biggest asteroids are hundreds of miles in diameter.

That said, asteroid 2020 LD is big enough to cause considerable damage if it were to have hit us. As a comparison, the space rock that caused Meteor Crater near Flagstaff, Arizona – a crater around 0.75 miles wide (1.2-km wide) – was estimated to be about 150 feet (about 46 meters) in diameter. That asteroid struck some 50,000 years ago.

How about a more recent comparison? The asteroid that entered Earth’s atmosphere as an amazing meteor over Chelyabinsk, Russia, on February 15, 2013, didn’t cause a huge crater (although some fragments were eventually recovered). But it did cause a shockwave that broke windows in six Russian cities, causing some 1,500 people to seek medical attention, mostly for flying glass. That original asteroid was an estimated 66 feet (20 meters) in diameter.

Size isn’t the only factor when determining an asteroid’s potential to cause damage. The asteroid’s composition and its angle of entry into Earth’s atmosphere are also determining factors.

Did you know you can calculate the effects of any asteroid impact via this cool impact calculator created by Jay Melosh, an atmospheric scientist at Purdue University? You could take the numbers of the various asteroids mentioned in this article – and plug them into that calculator – and scare yourself handily! Visit the impact calculator.

In the meantime, as far as we know, space rock 2020 LD is nothing to worry about. At this writing, 50 years is the length for which its orbit has been well calculated. It won’t come so close to Earth again as it did this month for at least that many years … and likely much, much longer.

Bottom line: Asteroid 2020 LD passed within the moon’s distance on June 5, 2020, but wasn’t discovered until June 7. It’s the 45th known and the largest asteroid to sweep within a lunar-distance of Earth so far in 2020.