“For the dinosaurs, the worst-case scenario is exactly what happened … because it put more hazardous debris into the upper atmosphere and scattered it everywhere, the very thing that led to a nuclear winter.” 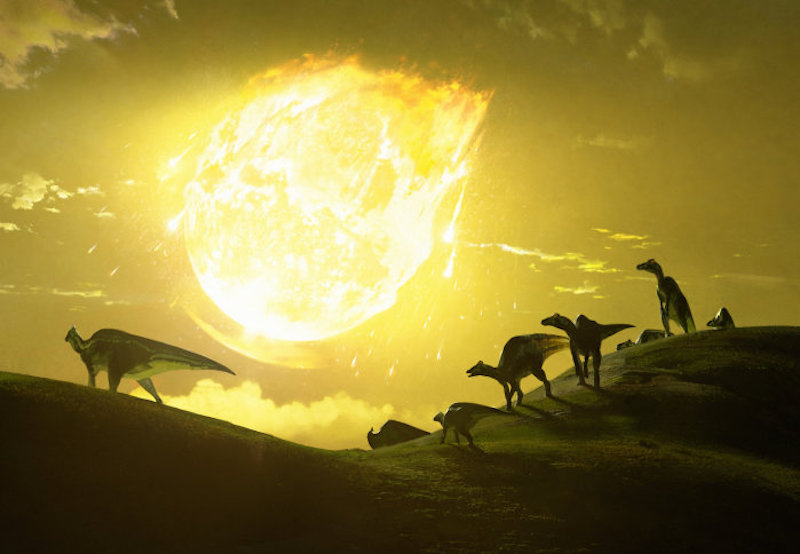 Artist’s concept of the fiery meteor that struck Earth 66 million years ago, bringing the age of dinosaurs to an end. Image via Imperial College London.

New computer simulations by an international team of researchers suggest the asteroid that doomed the dinosaurs, 66 million years ago, struck Earth at the “deadliest possible” angle. That is, these researchers say, it struck at an angle of about 60 degrees, thereby maximizing the amount of climate-changing gases thrust into the upper atmosphere. Such a strike would have unleashed billions of tons of sulphur into the air, blocking the sun, and triggering a nuclear winter that killed the dinosaurs and 75 percent of life on Earth at the time.

All of this is according to a study published May 26, 2020 in the peer-reviewed journal Nature Communications,

The – from Imperial College London, the University of Freiburg, and the University of Texas at Austin – examined the shape and subsurface structure of the Chicxulub meteorite crater in what’s now Mexico. Afterwards, they used that geophysical data to create computer models of the event. Their computer simulations helped them diagnose the impact angle and direction of the incoming meteor. They said in a statement that the new models are:

… the first ever fully 3D simulations to reproduce the whole event, from the initial impact to the moment the final crater.

For the dinosaurs, the worst-case scenario is exactly what happened. The asteroid strike unleashed an incredible amount of climate-changing gases into the atmosphere, triggering a chain of events that led to the extinction of the dinosaurs. This was likely worsened by the fact that it struck at one of the deadliest possible angles.

Our simulations provide compelling evidence that the asteroid struck at a steep angle, perhaps 60 degrees above the horizon, and approached its target from the north-east. We know that this was among the worst-case scenarios for the lethality on impact, because it put more hazardous debris into the upper atmosphere and scattered it everywhere – the very thing that led to a nuclear winter. 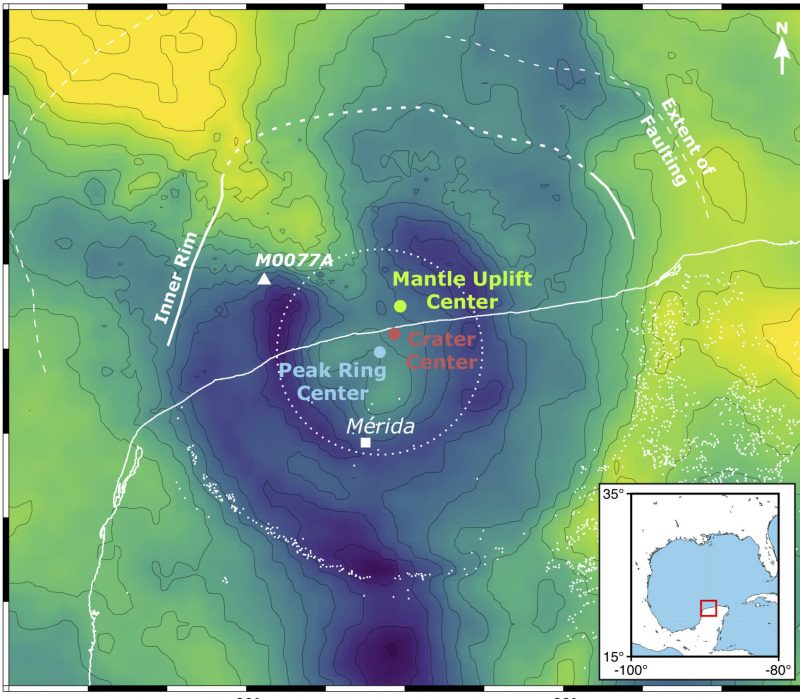 The upper layers of earth around the Chicxulub crater contain high amounts of water as well as porous carbonate and evaporite rocks. When heated and disturbed by the impact, these rocks would have decomposed, says the study, flinging vast amounts of carbon dioxide, sulphur and water vapor into the atmosphere. According to the research:

The sulphur would have been particularly hazardous as it rapidly forms aerosols – tiny particles that would have blocked the sun’s rays, halting photosynthesis in plants and rapidly cooling the climate. This eventually contributed to the mass extinction event that killed 75 per cent of life on Earth.

It turns out that an impact angle of about 60 degrees is ideal for hurling as much vapour into the air as possible, Collins told New Scientist. If the asteroid ha came in from straight overhead, he said, the asteroid would have smashed up more rock but not sent as much into the atmosphere, and if it was more of a glancing blow, less rock would have been vaporized.

The analysis by these researchers was also informed by recent results from drilling into the 125 mile (200 km) wide crater, which brought up rocks containing evidence of the extreme forces generated by the impact. Read about how the scientists conducted the study here.

Bottom line: A new study suggests that the asteroid that doomed the dinosaurs struck Earth at an angle of about 60 degrees, which maximized the amount of climate-changing gases thrust into the upper atmosphere.

Source: A steeply-inclined trajectory for the Chicxulub impact