This asteroid will pass closer than the moon on Friday 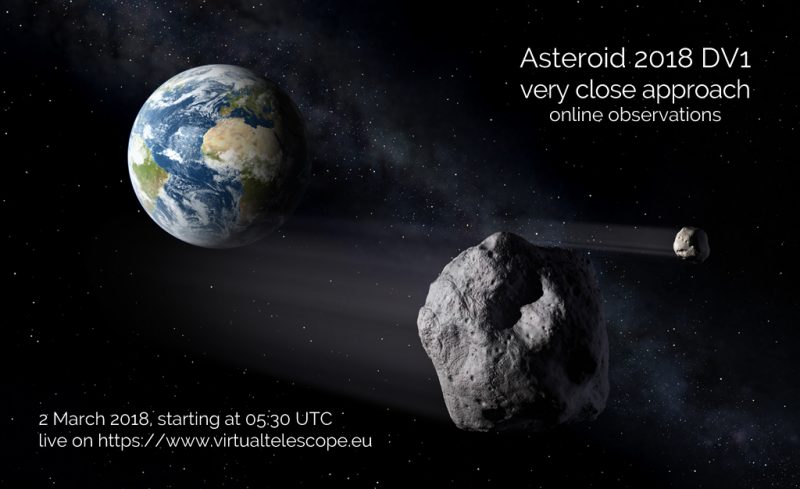 Near-Earth asteroid 2018 DV1 will have an extremely close encounter with Earth on March 2, 2018. It will pass only 65,000 miles (105,000 km) above the Earth’s surface. That’s about one-third of the moon’s average distance from Earth. And it’s in contrast to last Sunday’s close approach of another asteroid, 2018 DU, which swept past at about 175,000 miles (284,000 km). No, there is nothing unusual happening, no swarm of asteroids striking Earth or about to strike. Like Sunday’s passage of 2018 DU, this asteroid will pass safely, astronomers say.

The fact is that small asteroids pass us all the time, and have been passing us for billions of years. 2018 DV1 will be the 18th known asteroid to flyby Earth within one lunar distance since the start of 2018 and 6th closest.

We’re just hearing about them more now, because astronomers are getting much better at detecting and reporting these relatively small space rocks. 2018 DV1 has an estimated diameter in the range of about 20 to 40 feet (5.6 to 12 meters). That means it will be visible only with powerful-enough telescopes.

Small asteroids don’t always just pass closely. They also sometimes whoosh into Earth’s atmosphere, creating atom-bomb-scale impacts. Fortunately, our atmosphere does a good job of protecting us from these events, although there are sometimes human effects as with the February 15, 2013, explosion of a small asteroid over Russia.

Bottom line: Information and links to live viewing of near-Earth asteroid 2018 DV1, which will pass at about one-third of the moon’s distance on March 2, 2018.

Thank you! Your submission has been received!
Oops! Something went wrong while submitting the form.
END_OF_DOCUMENT_TOKEN_TO_BE_REPLACED