Astronomers observed a young galaxy, existing when the universe was only 4% of its current age. It had a mass of interstellar dust, formed during explosions of an earlier generation of stars. 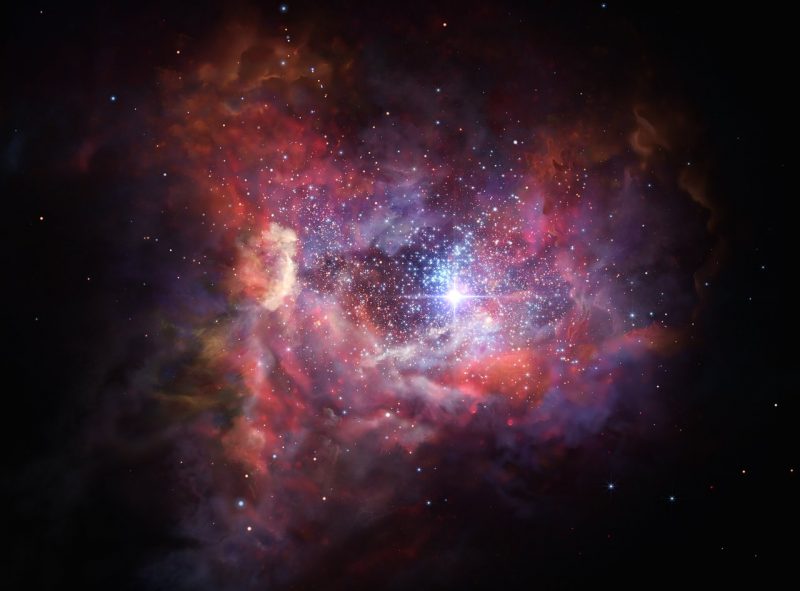 Artist’s concept of very distant young galaxy A2744_YD4, seen when the universe was just 4% of its current age. This galaxy is rich in dust, produced by an earlier generation of stars. Image via ESO/ M. Kornmesser.

The powerful ALMA telescope – perched high atop the high and dry Chajnantor plateau in northern Chile’s Atacama Desert, above some 40% of Earth’s atmosphere – observes the universe at the long-wavelength millimeter and submillimeter range of light. Dedicated as recently as March 2013, one of ALMA’s aims is to spot some of the most distant and ancient galaxies ever seen, and now it has detected its youngest galaxy yet, seen when the universe was only four percent of its present age. The galaxy appears to us as it was when the universe was only 600 million years old, during the period when the first stars and galaxies were forming. And what do you know? This young galaxy already contains a huge mass of glowing stardust, left behind by the birth and explosive deaths these very first stars.

This observation is also the most distant detection of oxygen in the universe, these astronomers said.

An international team of astronomers, led by Nicolas Laporte of University College London, have used ALMA (which stands for Atacama Large Millimeter/submillimeter Array) to observe A2744_YD4, depicted in the artist’s illustration above. To see an actual image of the galaxy, made with the Hubble Space Telescope, look below.

These astronomers said they were surprised to see the stardust, in such a distant and young galaxy.

They made follow-up observations using the X-shooter instrument on ESO’s Very Large Telescope (VLT), however, and confirmed the enormous distance to A2744_YD4. Nicolas Laporte commented in a statement from the European Southern Observatory (ESO), one of ALMA’s partner organizations along with astronomy groups in the United States, Canada, Japan, South Korea, Taiwan, and Chile:

Not only is A2744_YD4 the most distant galaxy yet observed by ALMA, but the detection of so much dust indicates early supernovae must have already polluted this galaxy.

And when he uses the word polluted, by the way, he means it in the best possible sense. As massive stars form and later explode, they seed interstellar space with their stardust and with the heavier elements made inside stars. The explosions spread the heavier elements – like carbon, iron and oxygen – into space, making them available for future generations of stars, and for planets like Earth.

Thus the Earth we live on, and our very bodies – the carbon in our bones, the iron in our blood, the oyxgen in the air we breath – all these elements were forged inside stars and later released to space.

This recent ALMA discovery shows the process that led to your reading the words on this page began for all of us in the very, very early universe. 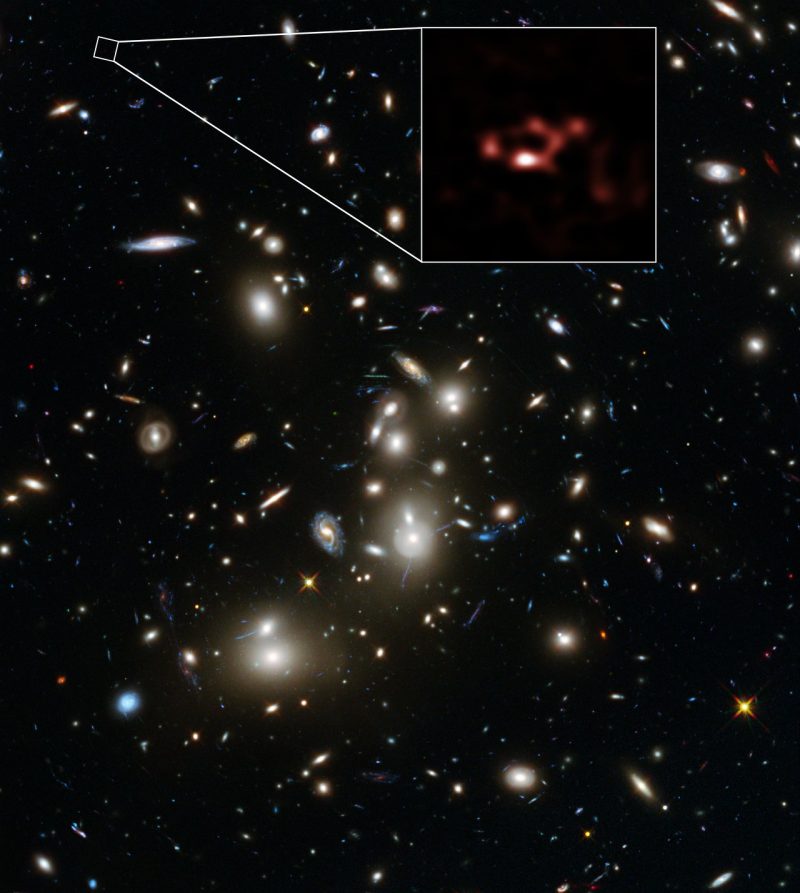 View larger. | This image is dominated by a spectacular view of the rich galaxy cluster Abell 2744 from the Hubble Space Telescope. But, far beyond this cluster, and seen when the universe was only about 600 million years old, is a very faint galaxy called A2744_YD4. New observations of this more distant galaxy with ALMA, shown in red, have demonstrated that it is rich in dust. Image via ALMA (ESO/NAOJ/NRAO), NASA, ESA, ESO and D. Coe (STScI)/J. Merten (Heidelberg/Bologna).

The ESO statement went on to explain:

Cosmic dust is mainly composed of silicon, carbon and aluminium, in grains as small as a millionth of a centimeter across. The chemical elements in these grains are forged inside stars and are scattered across the cosmos when the stars die, most spectacularly in supernova explosions, the final fate of short-lived, massive stars. Today, this dust is plentiful and is a key building block in the formation of stars, planets and complex molecules; but in the early universe — before the first generations of stars died out — it was scarce.

The observations of the dusty galaxy A2744_YD4 were made possible because this galaxy lies behind a massive galaxy cluster called Abell 2744. Because of a phenomenon called gravitational lensing, the cluster acted like a giant cosmic ‘telescope’ to magnify the more distant A2744_YD4 by about 1.8 times, allowing the team to peer far back into the early universe.

The ALMA observations also detected the glowing emission of ionized oxygen from A2744_YD4. This is the most distant, and hence earliest, detection of oxygen in the universe, surpassing another ALMA result from 2016.

The detection of dust in the early universe provides new information on when the first supernovae exploded and hence the time when the first hot stars bathed the universe in light. Determining the timing of this ‘cosmic dawn’ is one of the holy grails of modern astronomy, and it can be indirectly probed through the study of early interstellar dust.

Richard Ellis (ESO and University College London), a co-author of the study, said:

This rate is not unusual for such a distant galaxy, but it does shed light on how quickly the dust in A2744_YD4 formed. Remarkably, the required time is only about 200 million years — so we are witnessing this galaxy shortly after its formation.

The ALMA statement explained this means that significant star formation began approximately 200 million years before the epoch at which the galaxy is being observed. It said this distant galaxy thus provides ALMA with a great opportunity for studying the era when the first stars and galaxies “switched on” — the earliest epoch yet probed.

Our sun, our planet and our existence are the products — 13 billion years later — of this first generation of stars. By studying their formation, lives and deaths, we are exploring our origins, ESO said. 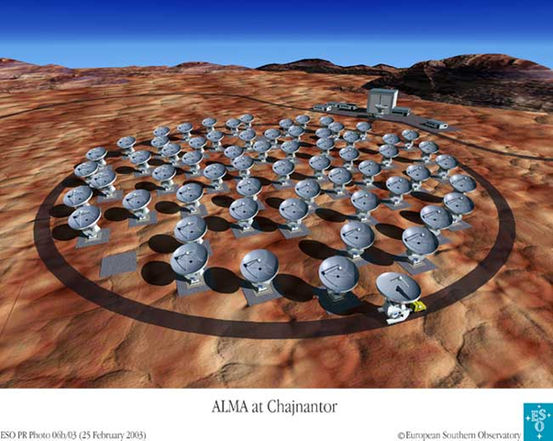 Bottom line: Astronomers used the ALMA telelscope in northern Chile to observe the young galaxy A2744_YD4. They saw it at a time when the universe was only 4% of its current age. It had a mass of interstellar dust, formed during explosions of an earlier generation of stars.