Dusty galaxy in the early universe 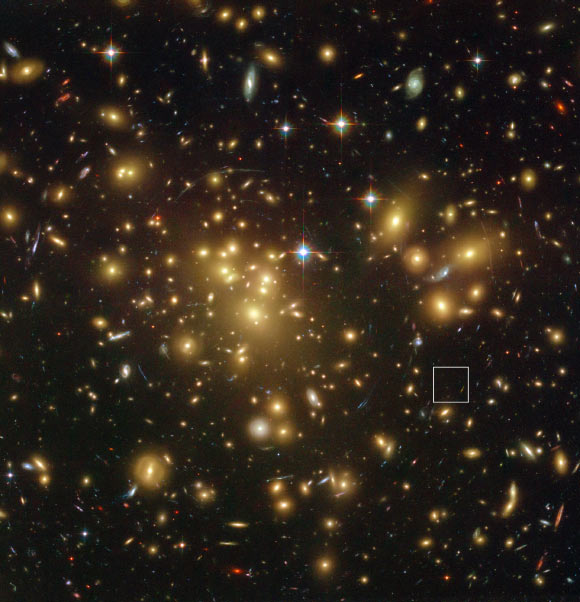 This is the galaxy cluster Abell 1689. It’s so massive that its gravity bends and magnifies light coming from more distant objects beyond it. That’s how we can see the galaxy A1689-zD1 (in box). It’s a dusty galaxy seen when the universe was just 700 million years old. Image via NASA / ESA / L. Bradley, H. Ford, R. Bouwens, G. Illingworth.

When our universe came into being – some 13.8 billion years ago – there was no dust. The earliest galaxies didn’t have dust; they were made only of gas. That’s why the discovery of a dust-filled galaxy in the early universe is revealing to astronomers. It indicates to them that galaxies became quickly enriched with dust containing elements such as carbon and oxygen – the raw materials that go into making planets. The study of this galaxy was published on March 2, 2015 in the journal Nature.

The dust in our universe – smoke-like particles made up of either carbon (fine soot) or silicates (fine sand) – originates in stars. It’s synthesized by the thermonuclear fusion process that allows stars to shine. Later, the dust is driven out into space when massive stars die and explode as supernovae.

In the space between the stars, dust gathers in clouds along with gas, and these clouds are the birthplaces of new stars and (presumably) their planets. The dust is comprised mainly of elements such as carbon, silicon, magnesium, iron and oxygen, ingredients that go into making up planets like our Earth.

These same ingredients can be found in our human bodies, and thus the famous saying that we are made of star dust. 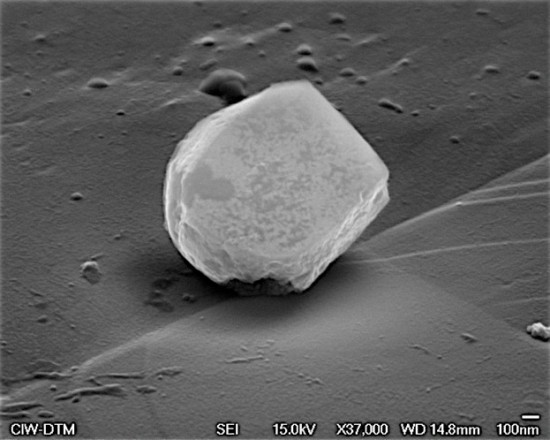 Electron microscope image of dust from interstellar space. Interstellar dust grains are typically about 100 nanometers (one nanometer is one millionth of a millimeter) and are made up of either carbon (soot) or silicates (fine sand).

What’s exciting to astronomers in this study is that the galaxy A1689-zD1 – which they say is “heavily enriched in dust” – is so distant. In our universe, a vast distance equals a long time ago. In this case, explains astrophysicist Darach Watson at the Niels Bohr Institute at University of Copenhagen:

… only 700 million years after the Big Bang. It is a galaxy of modest size and yet it is already full of dust. This is very surprising and it tells us that ordinary galaxies were enriched with heavier elements far faster than expected.

How can we see this very distant galaxy? It’s so far away that we would expect to see only incredibly luminous quasars at this distance. Yet we can see it (look at the image above, inside the box) because a large cluster of galaxies called Abell 1689 lies between the galaxy and Earth. The galaxy cluster is extremely massive, and its large mass and powerful gravity cause it act as a lens, amplifying the more-distant galaxy. This is gravitational lensing, which gives astronomers a magnifying glass on distant space.

As it turned out, due to the lucky circumstance of its location with respect to Abell 1689, the galaxy A1689-zD1 is one of the most distant galaxies known to date. That means it’s one of the youngest galaxies ever seen.

After determining its distance, the team then studied the galaxy with the ALMA telescopes in Chile. These telescopes can observe at far-infrared wavelengths, and they revealed that the galaxy was full of dust. In a statement from the Niels Bohr Institute, Darach Watson explained that young stars in early galaxies emit hot ultraviolet light. The hot ultraviolet radiation heats the surrounding ice-cold dust, which then emits light in the far-infrared. He said:

It is this far-infrared light, which tells us that there is dust in the galaxy. It is very surprising and it is the first time that dust has been found in such an early galaxy. The process of star formation must therefore have started very early in the history of the universe and be associated with the formation of dust. The detection of large amounts of solid material shows that the galaxy was enriched very early with solids which are a prerequisite for the formation of complex molecules and planets.

Darach Watson led this study, with Lise Christensen (also at the Neils Bohr Institute) and researchers from Sweden, Scotland, France and Italy.

The results are interesting to these researchers, who want to want to know how the earliest galaxies evolved and how our universe unfolded shortly after the Big Bang.

More speculative minds might jump to thinking of planets (habitable planets?) forming so long ago in the history of our universe. Of course, we know very ancient planets much closer to us in space, such as PSR B1620-26 b – sometimes called the Genesis planet or Methuselah because it is believed to be about 12.7 billion years old.

Finding planets at all beyond those in our solar system has been a relatively new endeavor (the first one found orbiting a main-sequence star, or star like our sun, was 51 Pegasi b in 1995).

And I want to emphasize that no planets have been found in the early universe. All that’s been found is dust – a raw ingredient for making planets. 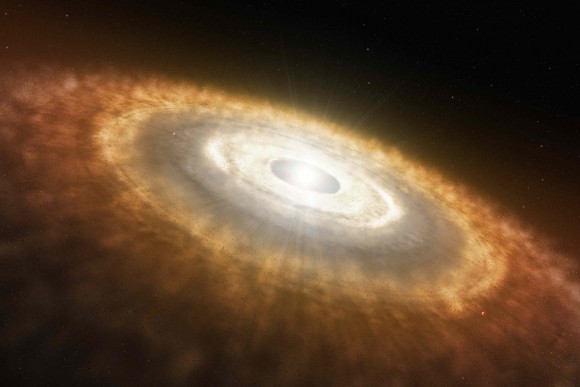 Artist’s illustration of a protoplanetary disk – a disk of dust and gas – from which stars like our sun and planets like Earth form. Illustration via NASA/JPL-Caltech.

Bottom line: The galaxy A1689-zD1 is located at a distance suggesting a time only 700 million years after the Big Bang, which took place some 13.8 billion years ago. It’s a young galaxy, and yet it is enriched with dust. The discovery suggests that, early in the history of the universe, other galaxies may have contained elements such as carbon and oxygen, the raw materials for making planets.

Via the Niels Bohr Institute