A black hole in the Orion Nebula?

One of the most recognized constellations is Orion, with its three prominent Belt stars, or three stars in a short straight row on the sky’s dome. This constellation can be seen at night at this time of year, ascending in the east, visible from all parts of the globe. Last week (November 1, 2012), an international team of astrophysicists announced the result of their work in computer modeling, which suggests that a famous nebula – or cloud – in Orion known as the Orion Nebula has a black hole at its heart, whose mass is some 200 times the mass of our sun.

If it exists, the black hole would reside somewhere between the four bright stars which mark the center of the Orion Nebula. These stars are known as the Trapezium. 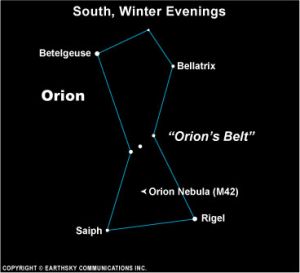 The Trapezium stars are the four brightest stars in an open star cluster – known as the Orion Nebula Cluster – consisting of young stars, newly born (only one or two million years ago) from the Orion’s Nebula’s gas and dust.

The Orion Nebula Cluster has long been known as peculiar. Its stars move at a rapid speed, as if the whole cluster were flying apart. If the cluster contained more high-mass stars, the speed of these stars would be easier to understand. But it doesn’t, and so astronomers have wondered why these stars move so rapidly.

An international team of astrophysicists – led by Dr. Ladislav Subr of Charles University in Prague – set up a computer model of the Orion Nebula Cluster. The model required a new method of dealing with the gas in this region of space and the way it is driven out from the young star cluster by the intensely radiating high-mass stars of the Trapezium. The model showed that, as the gas was being driven outwards, the cluster began to expand. That explained why most stars in the Orion Nebula Cluster move so rapidly. Many of the heavy stars were sling-shot out of the cluster, while some were driven into the center of the cluster and collided with the most massive star there. At some point, this massive star became unstable and imploded into a black hole, with a mass about 200 times larger than the sun.

These scientists were excited about this result. They said the finding had:

… dramatic implications for our understanding of how massive stars form and how such rich star clusters hatch from their gaseous cocoons. Having such a massive black hole at our doorstep would be a dramatic chance for intense studies of these enigmatic objects.

Amateur astronomers will be excited, too! Now, as you gaze at the Orion Nebula, you can imagine a black hole at its heart.

Bottom line: The Orion Nebula might have a black hole, according to an international team of astrophysicists. They made their announcement November 1, 2012 in the Astrophysical Journal.

Orion Nebula is a place where new stars are born

Thank you! Your submission has been received!
Oops! Something went wrong while submitting the form.
END_OF_DOCUMENT_TOKEN_TO_BE_REPLACED