Posted by Eddie Irizarry and Deborah Byrd in Space | January 28, 2021

In November, a new mini-moon began orbiting Earth. NASA later confirmed it’s a lost-and-found 60s-era rocket from the Surveyor 2 moon mission, launched more than 50 years ago. Now the object – SO 2020 – is coming close again for one last time. Here’s how to see it!

Strange space object 2020 SO was discovered on September 17, 2020, on approach to Earth. On November 8, it slowly drifted into Earth’s sphere of gravitational dominance, to become a new mini-moon. It’ll escape back into a new orbit around the sun in March 2021. During that time, it’ll make 2 large loops around our planet. In this image, Earth is the blue dot. The moon’s orbit is the yellow circle. 2020 SO’s trajectory is the looping pink line. Image via Phoenix7777/ Wikimedia Commons.

Astronomers first noticed the object now known as 2020 SO last September. Orbit models quickly showed that both the low speed and trajectory of the approaching object were unusual. The models showed that Earth would capture this object – temporarily – as a new mini-moon. And that’s what happened. 2020 SO has been orbiting Earth since November 8. Following further analysis of its motion – and a very close approach of the object (just 30,000 miles, 50,000 km or 0.13 lunar-distances) on December 1 – NASA was able to confirm that the object is a relic of the early Space Age, a Centaur upper-stage rocket booster, once called America’s workhorse in space. Now 2020 SO is about to make one more close approach to Earth on February 2, 2021. It’ll pass farther away this time, but still within 0.58 lunar-distances (140,000 miles, or 220,000 km). Afterwards, in March 2021, Earth’s gravity will relinquish its hold on the object.

It’ll no longer be a mini-moon for Earth. Instead, it’ll be orbiting the sun.

You have a chance to see 2020 SO online. The Virtual Telescope Project in Rome will be showing the object online on the night of February 1. Italian astronomer Gianluca Masi wrote:

We will say it goodbye, live: join us from the comfort of your home!

The live feed is scheduled for the night of February 1, 2021, starting at 22:00 UTC (that’s February 1 at 4 p.m. Central, 5 p.m. Eastern, 2 p.m. Pacific in North America; translate UTC to your time). That’s when, Gianluca said, 2020 SO will be at its best above the Virtual Telescope’s robotic telescopes in central Italy. See the poster below for details and read more about this event via Virtual Telescope. 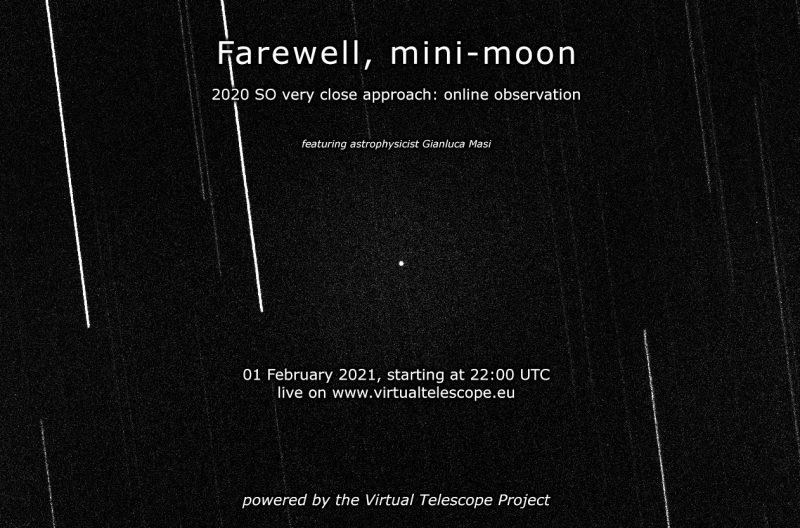 Poster of the February 1, 2021 online event, via Virtual Telescope.

Astronomers first sighted the object on September 17 using the 71-inch (1.8-meter) Pan-STARRS1 telescope at Haleakala, Hawaii. They gave it its designation – 2020 SO – and added it as an Apollo-type asteroid in the JPL Small-Body Database.

However, 2020 SO was quickly seen to have some features that set it apart from ordinary asteroids. According to NASA/JPL calculations, the object sped past Earth’s moon at a speed of 1,880 miles per hour (3,025 km/h) or 0.84 km per second (.5 mi/sec). That is an extremely slow speed for an asteroid.

These calculations also show the apparent “slow asteroid” orbiting the sun every 1.06 years (387 days). The low relative velocity, along with the Earth-like orbit, both suggest it as an artificial object launched from our planet. Radar images showed that 2020 SO had an elongated shape estimated to be between 20 and 45 feet (6 to 14 meters), a match for the dimensions of an Atlas LV-3C Centaur-D (approximately 41 feet or 12 meters).

The confirmation that SO 2020 was indeed a lost-and-found rocket booster came from data collected at NASA’s Infrared Telescope Facility on Maunakea, Hawaii, and from orbit analyses conducted at the the Center for Near-Earth Object Studies (CNEOS) at NASA’s Jet Propulsion Laboratory in Pasadena, California. This particular rocket launched the ill-fated Surveyor 2 spacecraft toward the moon in 1966.

Paul Chodas, manager of NASA’s Near Earth Object center at the Jet Propulsion Laboratory (JPL) in Pasadena, California, first suggested the object might be Surveyor 2’s lost rocket booster. Surveyor 2 was a robotic spacecraft that was launched to the moon on September 20, 1966. It was meant to be the second lunar lander in the uncrewed American Surveyor program to explore the moon. The spacecraft blasted into space atop an Atlas LV-3C Centaur-D rocket from Cape Kennedy, Florida.

A mid-course correction failure caused ground controllers to lose contact with the craft three days later, after a thruster failed to ignite. The failure caused the spacecraft to tumble and ultimately to crash near the moon’s Copernicus crater.

Unlike some rocket boosters today (which return to Earth and land on ships at sea), Surveyor 2’s rocket booster remains in space and was lost. It appears to have been pushed from its original trajectory by a small but continuous pressure from sunlight.

As it turns out, the defunct booster – now known as 2020 SO – had passed Earth unnoticed several times in the past, including a close approach in 1966, not long after it launched. 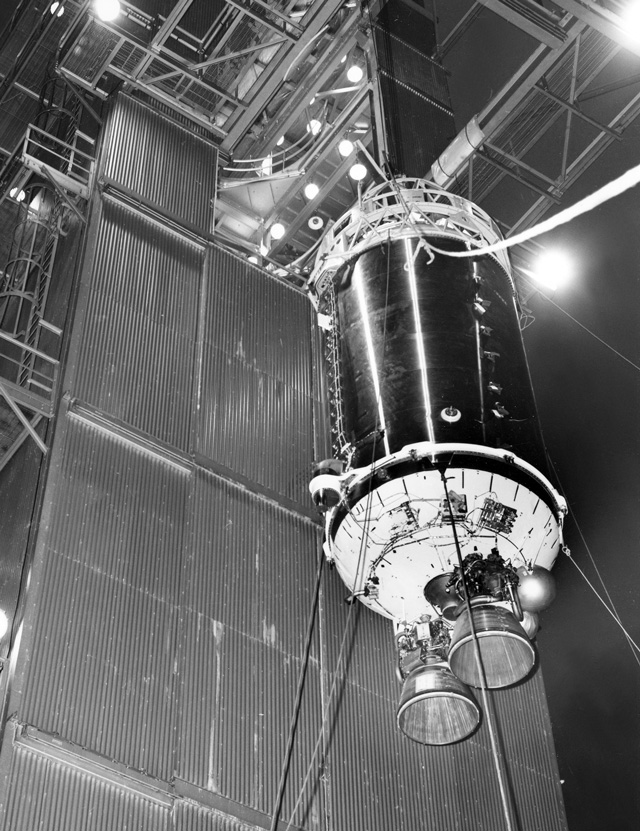 This 1964 photograph shows a Centaur upper-stage rocket before being mated to an Atlas booster. A similar Centaur was used during the launch of Surveyor 2 two years later and is currently known as 2020 SO … a new temporary mini-moon for Earth. Image via NASA/ JPL-Caltech. 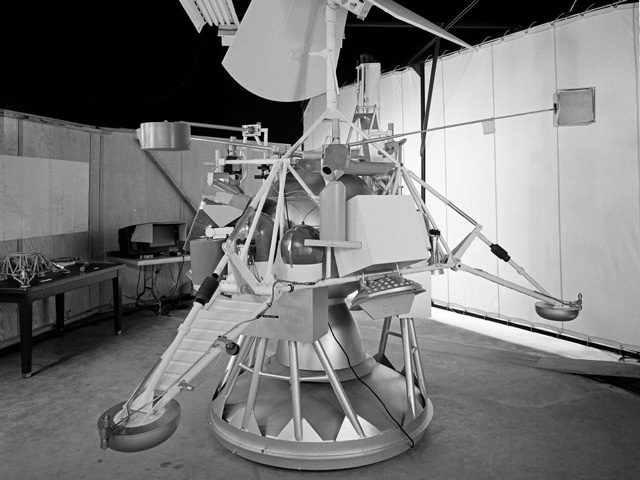 A model of the ill-fated Surveyor 2 lander, which crashed on the moon in 1966. Image via NASA/ JPL-Caltech.

How could we have lost an entire 41-foot-long rocket? Space archaeologist Alice Gorman of Flinders University in Australia told ScienceAlert that – before our modern era of reuseable rockets – the rockets that launched craft into space were surprisingly easy to lose. She said:

There are so many factors in the space environment, like gravitational factors and other things that affect movement, that it can sometimes be quite unpredictable.

You have to keep tracking these things, or you can just sort of lose sight of them really easily. And if they do something a little bit unpredictable, and you look the wrong way, then you don’t know where it’s gone. It is quite astonishing, the number of things that have gone missing.

NASA explained that pressure from the sun’s radiation caused the object to change its trajectory:

The pressure exerted by sunlight is small but continuous, and it has a greater effect on a hollow object than a solid one. A spent rocket is essentially an empty tube and therefore is a low-density object with a large surface area. So it will be pushed around by solar radiation pressure more than a solid, high-density clump of rock, much like an empty soda can will be pushed by the wind more than a small stone.

This animation shows the orbit of 2020 SO as it was captured by Earth’s gravity on November 8, 2020. It will escape in March 2021. Its motion has been speeded up a million times faster than real time. Image via NASA/ JPL-Caltech.

This isn’t the first time Earth has captured a mini-moon.

As you might have realized by now, space is chock-full of small asteroids. Once in a while, one of these space rocks is captured, temporarily, by our planet’s gravity, before being cast out back into the solar system at large. Two confirmed mini-moons are 2006 RH120 (in Earth orbit between 2006 and 2007), and 2020 CD3 (in our orbit between 2018 and 2020).

It’s also not the first time we’ve mistaken space junk for an asteroid.

Another small object that was initially thought to be an asteroid was WT1190F, detected in October 2015 on approach to Earth. Its trajectory suggested it was about to penetrate Earth’s atmosphere near Sri Lanka, in the Indian Ocean, an event that happens with ordinary asteroids several times every year.

As WT1190F was disintegrating in our atmosphere on November 13, 2015, scientists analyzed its light via spectroscopy.

This analysis suggested the object might be a spacecraft component or part of a spent rocket, another wandering piece of space junk returning home.

In the case of 2020 SO, its return home won’t last long. After March, the spent rocket body will be on its way again, back into a larger solar orbit. Who knows how long we’ll keep track of it this time? 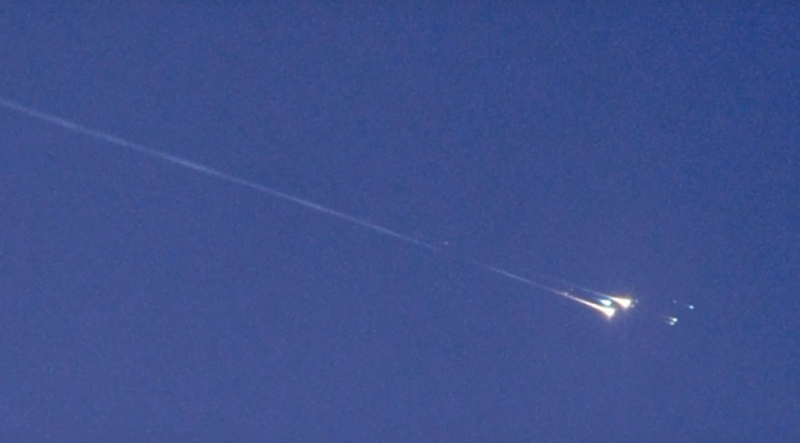 2020 SO isn’t the first object thought to be an asteroid, and later realized to be human-made space junk. Here’s an object tagged as WT1190F entering Earth’s atmosphere south of Sri Lanka on November 13, 2015. Image via IAC/ UAE/ NASA/ ESA.

Bottom line: An “asteroid” spotted in September 2020 became a new mini-moon for Earth in November. In early December, NASA confirmed the object is a lost rocket from the Surveyor 2 mission, originally launched from Earth more than 50 years ago. Now 2020 SO is about to make a final close approach to Earth. That’ll happen on February 2. The night before, February 1, you can join an online viewing of this object.